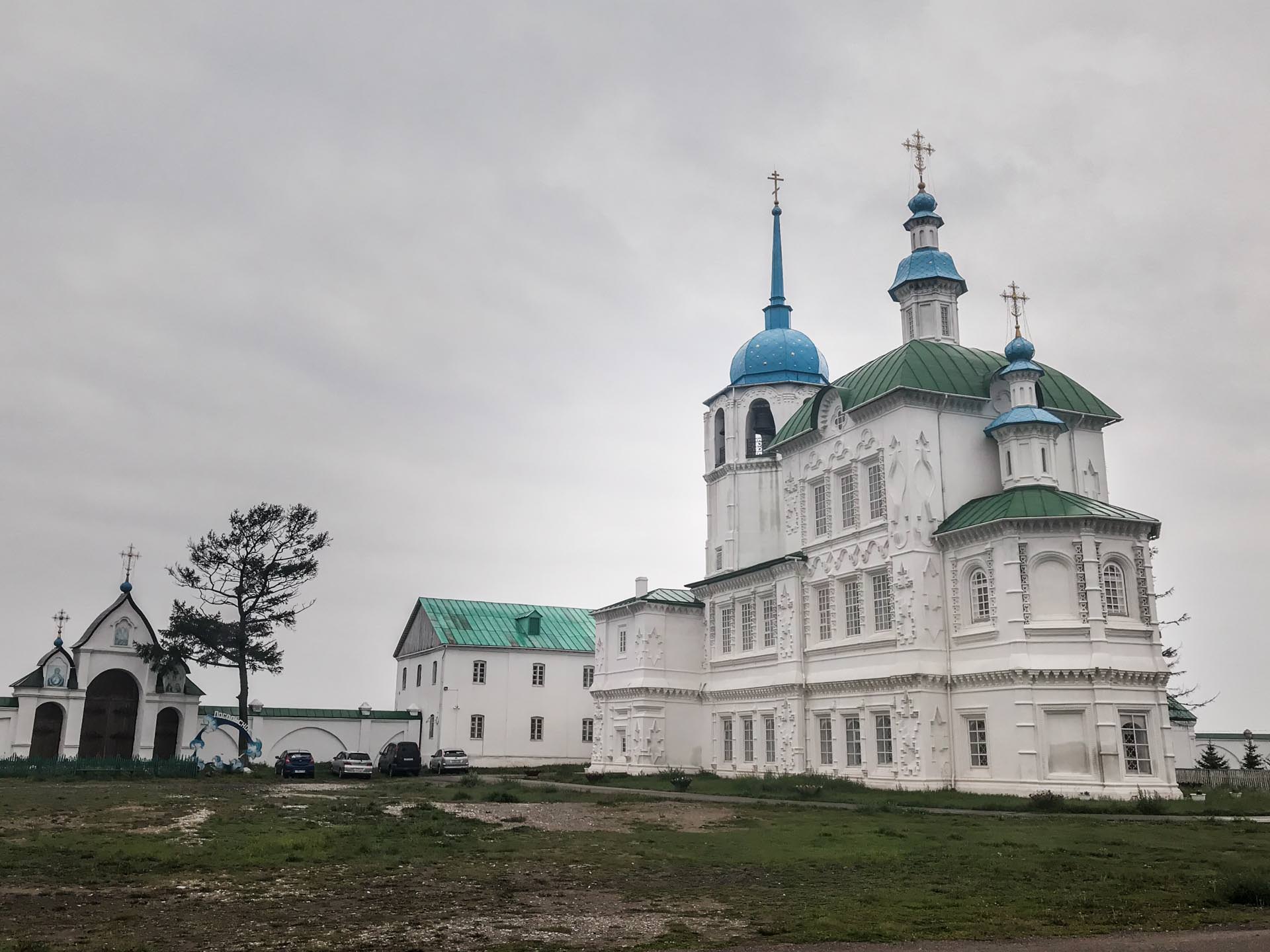 On a hill covered by a green carpet of grassland, stand white walls of the Orthodox cathedral. Metallic sounds of a melody played by the bells escape from the blue, onion-shaped domes and hang over the large mirror of water. To this accompaniment, appear long-lashed meadow models – cows from the nearby pastures. One after another, they dip their pink tongues in crystal clear water of the oldest lake in the world – Lake Baikal.

My husband and I take a turn off the federal road Irkutsk – Ulan-Ude and through a narrow band of asphalt reach the tiny village of Posolskoye. In the greys of dusk and rain, we manage to park our ambulance almost on the lake shore. In the rear mirror, the outline of a sprawling building with domed towers is visible – the Orthodox Holy Transfiguration Monastery.

The next day, under the clouds heavy with rain, we cross its thresholds.

To get to the courtyard surrounded by white walls, one has to go through an inconspicuously looking wooden gate covered with flaky blue paint. We push it and pull, and nothing happens. We try again and again to no avail. Finally, our eyes rest on a rope hanging from a hole near the handle. We pull the string. On the other side, there is a sound of a heavy iron bar rising. The gate gives way with a crunch of old boards.

The courtyard is spacious. In its centre covered with short grass, rises the cathedral. Pure whites of walls sharply cut from the background of grey, cloudy sky. A bell tower and two smaller towers with blue and green roofs crown two floors of the main building. The interior, with the icons on a gilded altar, we can see only briefly – through the shoulders of people bent in prayer: men on the right side, women – in flowery headscarves – on the left.

Around the courtyard, adhered to the wall, stand utility buildings: a canteen, an accommodation for seven priests residing here, guest quarters and shrines. Their pristine white is broken only by the natural colours of the flower, herbal and vegetable gardens. Behind the greenhouse, the time-worn stone tables lie flatly on the ground. Their inscriptions date back even to the 18th century. An old cemetery.

In the northern part of the wall, in the shadow of a massive tree, there is an inconspicuously looking wooden gate. It opens onto Lake Baikal and a hill with a tiny chapel. Next to it, there are seven crosses – six simple wooden ones, and one larger, made of stone.

“This is the place where the Mongols killed Russian ambassadors”, seeing my poor attempt on deciphering the Cyrillic alphabet, the man coming out of the chapel hurries with explanations. “Our village is named after them (an ambassador – Rus. posel)”, he adds.

In 1648, Khan Tsysan, who ruled in the north of Mongolia, sent a request to the Tsar of Russia, to grant him and his men Russian citizenship. In 1650, Tsar sent his ambassadors led by Zablotsky, to let Khan know about the favourable decision. However, ambassadors fell victims to Mongolian bandits. In the place of their tragic death, a chapel was created, which then turned into an Orthodox church and finally a cathedral and a monastery.

Buildings of this complex are neat and very modest compared to the splendidly decorated cathedrals in large cities. At the same time, this neatness and modesty are the most magnificent ornaments of the cathedral complex. Modesty, peace, silence and Lake Baikal.

This inconceivable lake, shimmering at the foot of the cathedral, is its pearl in the crown. Its origins reach back 30 million years. It contains more than 20% of the entire drinking water resource on earth – an amount that is enough to sustain a quarter of the world’s population. The deepest lake in the world (its deepest point is at 1642m) is home to thousands of species of plants and animals. Most of them are endemics – species unique only to a specific place. Their most famous representative is nerpa – the Baikal seal, one of the three existing species of freshwater seal. There are also dozens of fish species – with the most famous omul, which reigns on the tables of the locals.

A typical view here, at sunset, is a figure in green overalls, long waders riding an antique motorcycle with a raft attached to it. Without lights, without any navigation other than the stars, the figure along with the raft slides into the water. After a while, one can hear only a quiet splash of wooden oars and the silhouette – together with the setting sun – disappears behind the horizon.

And when the sun comes back, together with the fisherman on the shore appear whole families of locals who freshen up in Baikal waters. Entire generations – starting from a few year olds, to seniors of the family – are splashing in crystal clear 15 degrees Celsius.

Me and my husband splash as well. We huff and puff from the cold and immediately become a local attraction.

“And where are you coming from? I’m old, so I’m allowed to be curious”, asks a wrinkled grandma tightly wrapped in a blazer and a flowery headscarf.
“We are from Poland, travelling around the world, to Alaska.”
“Oh! Around the world!” Her eyes widen, and she instantly hurries with the tourist information, “Have you been to the monastery already? There, the ambassadors lie”. We nod in unison.
“The Mongols killed them … Eh! Politics! Bad news. Only war and war! And wouldn’t it be better just like us? Go to the lake, have a chat, have fun? Huh?” An elderly woman grieves over history and politics only to suddenly laugh out loud, “Oh! I am here talking about politics, and you are freezing to death in wet towels. Go, go! Dry and rest before your trip. All the best, children! All the best!”

Per grandmas order, we walk back to the car along the lakeshore. Behind us, a herd of cows returns from the Baikal waterhole, freeing the space for the approaching flock of horses. Between the animals, in the wind-stilted cloths of the black dress and the black cylindrical cap, a pop hurries back to the monastery from the morning prayer over the ancient, natural temple of Lake Baikal.

A passing downpour fills the air with a scent of steaming soil. Inescapable humidity is intensified by large-leafed...

“You will catch bait for barracuda”, one of the fishermen explains to us. Earlier in the day, a long wooden boat...