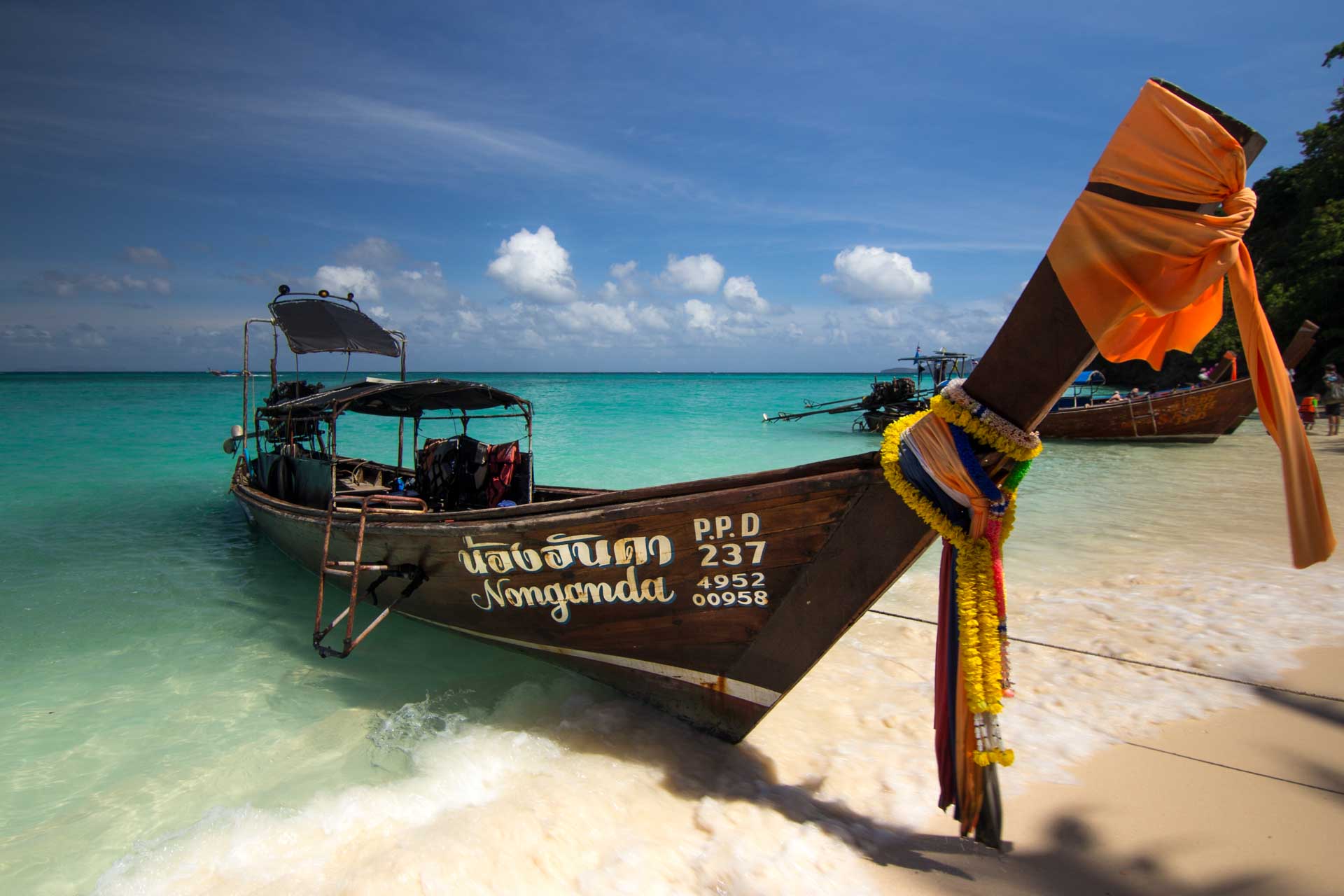 “You will catch bait for barracuda”, one of the fishermen explains to us.

Earlier in the day, a long wooden boat fitted with colourful sashes had carried us to a small fishing vessel, moored just off the shore of the Thai island of Phi Phi Don. Our feet had barely touched the deck when a three-person crew handed us our fishing rods.

With a beer in one hand and a fishing rod in the other, we sit on the side rails and start to trawl. The sun is already setting, and its last rays smudge the water’s surface with red streaks.

The horizon disappears into darkness. Soon, we report our results to the crew, proudly presenting a few tiny silver fish, swimming at the bottom of a plastic bucket.

At this sight, one of the fishermen – a shirtless man with knots of muscles dancing under his tanned skin – sets off to do the job himself. A few moments later, black liquid floods the deck. The squid – jerked from its watery home – expresses its dissatisfaction by secreting ink on all sides.

“Wow! It’s big! Let’s fry it!” The fisherman and his catch disappear behind the skipper’s booth.

The night is getting deeper. The black water beneath our boat is illuminated by spotlights for light-catching fish. All of them, with full premeditation, bypass our fishing rods.

Only the captain – the oldest fisherman, a chubby man with eyes set in a perpetual squint, as in deep thoughtfulness – cheers for us enthusiastically.

Soon, fishing rods instead of hands hang from metal racks. The rest of the bait enjoys their briefly extended life at the bottom of a plastic bucket. In the middle of the deck, on a chequered blanket, together with the crew, we enjoy fried squid in a spicy chilli sauce, vegetables with rice and homemade rum, which, like the chilli sauce, squeezes tears from our eyes.

The conversations get louder, the laughter more raucous. The captain jumps repeatedly out of the skipper’s booth with a metal rod to stun the fish, plaintively crying out into the night: “Barracuda! Please!”.

Finally, his pleas are heard. The silver streak of a fish thrashes on the deck, snapping left and right, jaws armed with savagely sharp teeth.

Nearly fifteen years after the devastating tsunami caused by the earthquake in the Indian Ocean, almost everything has returned to normal.

Underwater life has returned to the Andaman Sea, which flows through the archipelago of the Phi Phi Islands. The seagrass has recovered the fastest. Just six months after the tragedy, the bottom of the sea burgeoned with underwater swards. With it returned the fish.

The coral reefs and mangrove forests – natural wave breakers – have suffered the most from the tsunami and – even now – have yet to fully recover from the tragedy of 2004. Not only did they take on the first impact of the tsunami waves, but they were further destroyed by the backwashed debris of houses and land structures.

We cannot see any evidence of these events the morning of the next day, which finds us at the viewpoint on the eastern part of Phi Phi Don.

From our vantage point on a hill located 186m above sea level, there is a phenomenal view of the island. A wall of green palm trees – reaching to the sky – morphs into a narrow isthmus connecting the opposite ends of Phi Phi Don.
A swarm of red-roofed hotels and tourist resorts cuts off brightly from the white beaches and emerald seawaters. Human settlements smoothly transition into a settlement on water, composed of countless yachts and boats. Behind them stand high, limestone cliffs, framed by a cloudless blue sky.

On December 26th, 2004, this narrow pass of Phi Phi Don was hit by the tsunami waves, which engulfed in both bays in devastating synchronicity. The wave that came from the southern side – Ton Sai Bay – was three meters high. The on striking from the Loh Dalum Bay in the north was twice as high. The elements took the narrow isthmus, located just 2 meters above sea level, into its deadly water grip, and did not let go until it was utterly destroyed.

The isthmus was the tourist heart of Phi Phi Don. Human solidarity needed only two weeks to rush to the aid of Phi Phi. Residents and volunteering travellers alike took part in the removal of debris, and in the cleaning and rebuilding of the island. Their most challenging role was to retrieve the bodies of those who had been sent on their final journey by the tsunami waves.

The land itself needed only a year to shake off the tragedy. By the middle of 2005, over twenty thousand tons of debris had been removed from the island, half of the buildings fit for repair had been restored, and several hundred institutions had reopened businesses. This number increased to over a thousand before the end of the year.

The land needed only a year to reverse the effect of the tsunami, but the loss of human life was irreversible. The Thai Government, taught by a bitter lesson, installed early warning devices around the island. Their program also offered extensive training to the tourist resorts and hotels regarding effective evacuation and first aid.

Paradoxically, the post-tsunami period brought a tourist boom to the Phi Phi archipelago.

The island of Phi Phi Don is covered with new hotels, tourist resorts – picturesque structures on snow-white sand beaches. Each of them offers fabulous attractions: Island hopping around five remaining islands of the archipelago; diving and snorkelling; night fishing trips and wildlife encounters.

Lured by this broad palette of offerings, we hop into a wooden boat and getting carried away towards the “Monkey Beach”. Its white sand is dotted with grey-brown, furry macaques. The roaring engines of the vessels – ours and a dozen others – do not deter the animals at all. Their number on the beach grows by the minute. Some of them jump into the water; some wait patiently on the shore.

With persistent anticipation in their black, beady eyes, they reach out toward us with the furry paws. You do not have to wait long before human hands full of snacks reach back. Apart from fresh fruits – acceptable within the common senses – bread, crisps, plastic bottles with water and other drinks are offered. The local helmsmen who bring in the crowd shyly protest, but their voices are lost in the laughter of amused tourists.

Another stop – Phi Phi Leh island with the Maya Bay, made famous by the film hit with Leonardo Dicaprio – The Beach. The place to which we sail, however, does not resemble a movie set at all. Instead of an azure lagoon, we are greeted by sharp limestone rocks, bases washed out by waves stirred by strong currents.

The narrow pass between the rocks is topped with a makeshift wooden deck, a web of intertwined ropes dangling from it. Maya Bay makes us work hard to enjoy its charm. The booming voice of our skipper confirms our assumptions: Everything that cannot get wet is to be placed in waterproof bags. It’s best to carry these on your back, for you need your hands free to hold onto the ropes. The underwater current is quite strong, and now – at high tide – its strength is doubled.

Before reconsidering whether we want to do this, we dive into crystal clear and pleasantly cool water. And just as the skipper said, the strong current of the tide immediately throws us towards the rocks. We strain our muscles and grasp at the net of ropes, in an attempt to rise from the water, thighs and knees scrubbing on underwater stones.

Our feet do not manage to catch the ground, and if they do, they are immediately pierced by the paralysing pain of meeting with sea urchins. Although the task is not easy, everyone pushes through it with the stubbornness of a mule, even a young woman who is holding a few-year-old child in her arms. After a short but intense struggle, exhausted with muscles trembling from the effort, we finally land on the wooden deck.

The next leg of our journey is a walk in a park. Literally.

A few hundred meters away, a rare grove lines the sandy centre of Phi Phi Leh. A heavenly bay appears before our eyes. The emerald of the water blends with a mantle of greenery covering the rocks surrounding the lagoon.

Their limestone hoods shade the white sand of the beach. The mouth of the bay, a narrow pass, opens to the Andaman Sea. But we can only imagine its azure beauty: Our eyes are not able to penetrate the wall of yachts and boats tightly clinging to each other. We are not able to see it through the continually waving, posing for photos crowd of people.

The macaques fed with junk food, coral reefs destroyed by the anchors of boats and yachts, waste left behind by tens of thousands of tourists – a tragic contrast with the fairy-tale beauty of the emerald paradise of the Phi Phi Archipelago.

The sight of heavenly landscapes of white beaches merging with a crystal mirror of the sea and limestone colossus of rocks reaching towards the azure sky fills us with awe, but also melancholy. And a sad longing for a place that existed here before we chanced upon it… before we covered it with a wave of humanity. Like the tsunami.

Buddhism at the hanging rock

Thaipusam - the way of finding bliss

1:30 am – middle of the night. In a simple wooden, mountain shelter we are getting ready for an expedition to the...

In Bishkek they told us, there is no point in going to Issyk-Kul at this time of the year. It is already long past...