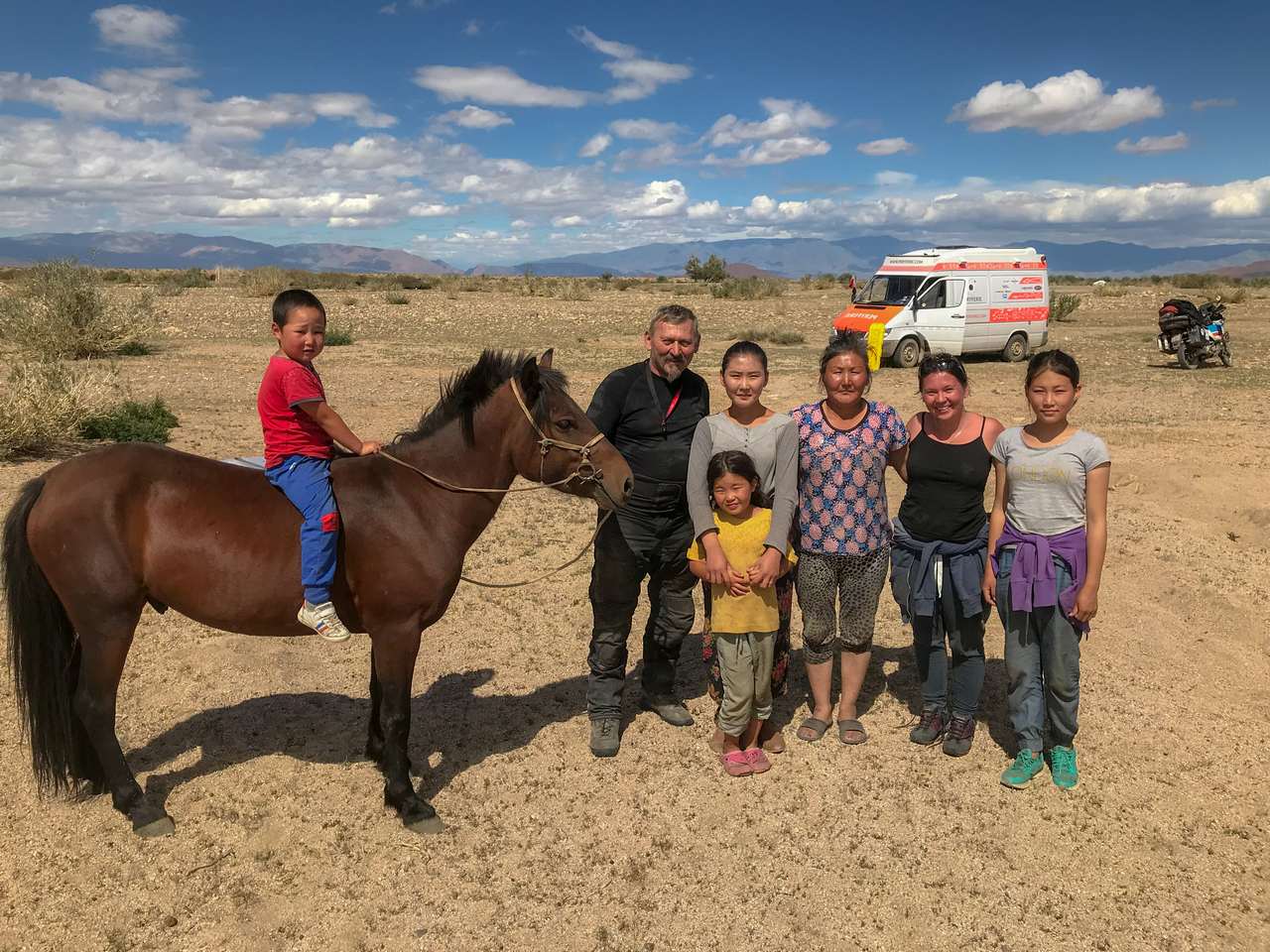 Almost a week has passed since we set our camp in Bayankhongor. Each day here brings new surprising events and most amazing people. But it is time to move on.

On the eve of our departure, we try to get everything ready for the road: the most critical part – the route. With no proper roads most of the time, our navigation is going crazy, so we turn to the old-school map. Soon, the sheet of paper glistens with black lines of a marker. With the trail set, we get ready to bed. Suddenly, the phone’s screen lights up with a message notification.

“Before you leave, would you like to visit my family and me? Regards, Bayaraa”

We met two days earlier. They were picnicking by the river, and we were camping there. They invited us to share their evening, food and vodka. A random, accidental meeting that concluded in a Facebook profiles exchange.

The next day, we sit on a sofa in a living room with an open kitchen annexe. In front of us, a small boy open-mouthed stares at a TV set on the wall. It shows Mongolian wrestling. Two powerfully built men – in beautiful, hand-made vests, skimpy, but richly decorated briefs and mid-calf boots to die for – try to knock the opponent down.

From a coffee table, set to the brim with tea and sweets, we cast a glance back and forth – at a TV, and a scene taking place at the kitchen bar.

While we devour juicy ‘buuz’, Bayaraa tells about her family.

“No, we have not always lived in this flat. It’s been only about five years. Earlier on, we lived in a ger. This apartment, however, is more comfortable for the children. It is also close to my work – the school here in the neighbourhood.”

Turning attention away from her person, she points at a monitor, and a drives station whitening on a table under a window.

“It’s my husband’s. He works at the local university, but his passion is photography. It is his photo-editing workstation.”

In confirmation of her words, Tvmee passes us a few photo albums and shows piles of CDs full of photographs.

Walls of the apartment are also full of pictures. On one of them, the whole family – Bayaraa, Tvmee and two kids – poses dressed in traditional deel outfit. Beautiful hand-made cashmere coats with matching headdresses.

Noticing our admiration, Tvmee fishes out his outfit – an elegant beige coat with brown finishes. He hands it over to Andrzej. Bayaraa helps to push the satin buttons through ribbon loops and skilfully fastens a wide belt.

Andrzej, a bit too much enthusiasm in his new role, exclaims:

“Bring me a horse and vodka!”

Straight away, a bottle appears on the table. A horse, if possible, would probably appear as well. The beautiful cashmere deel also ends up as a gift to Andrzej. Our protests that this is too generous and too personal are cut short by Tvmee:

“From a friend to a friend.”

Only Bayaraa is inconsolable. She would love to present me with a deel as well, but she has none to give.

It is way too difficult to say our goodbyes. But we have to get to the next destination before the sunset.

We reached the end of the asphalt road in Khovd, a small town in a vestibule of the Altai Mountains. For another 100km there will be only a beaten gravel track under our wheels.

“You know that today is August 14th? Exactly two months ago, we started our journey”.
“Wow! We have to celebrate it somehow!”.

At the same moment, a motorbike with a police siren on appears behind our car. Looks like, we will be celebrating in jail.

We stop on a hill, with a breath-taking view: hills – covered with green carpets of meadows – turn into dark, sharp mountain rocks, with their peaks tightly tucked in the fluff of snow caps. The sun sets them on fire with its blood-red rays of sundown.

If we are to be arrested, it is only with this view in mind.

We get out of the car, just in case already full of remorse and… we fall straight into open arms of a black-clad motorcyclist.

“How good to see Polish faces! Here at the end of the world!”, exclaims the individual in Polish, while hugging us tightly. “I saw a Polish flag sticker on your car, but I could not believe my own eyes!”.

Our ‘policeman’ turns out to be Wlodek from Rajcza, a small town in southern Poland. After a while, the three of us look for a place for the night where we can properly celebrate our meeting. Shortly, at the camel pasture, over a bottle of Mongolian vodka, we get to know one of the most colourful characters who visited our homebulance.

Wlodek is a traveller with a mission. As part of the campaign “Remembrance Bridge”, he travels the world following the footsteps of Polish political prisoners sent in the 1940s to the furthest ends of the globe. By profession, he is a mountain rescuer in Mountain Volunteer Search and Rescue – Beskidy Group, and by passion – a sculptor, biker, traveller and chronicler of human fate.

He talks about the people he met so far, what he saw and experienced along the way. And he speaks in a way that even the mountains listen: about clerics who help people in the farthest reaches of Siberia; about a 90-year-old woman who survived the gulags and is still afraid to talk about it, because “it all may still come backa” and about the Mask of Sorrow, a monument built in memory of gulag prisoners and victims of Stalinist repressions.

We could not have imagined a better celebration of our two months on the road.

The next day we start lazily. Wlodek makes a coffee, folds back his tent, packs up the stuff and asks over and over again:
“Do you have thermal blankets? No? Well, take these – they super useful”.
“Here, these are dust masks – great for driving on dirt roads. Oh, and snorkelling goggles – they are also good. So tight, they won’t let any dust pass.”
“How about medicaments? You have, OK. But take at least Panadol – it is never too much of it.”
“Oh! It is great against all kinds of bugs – a hat with a mosquito net! Take it, take it! I’m going back home now, and you’re just starting.”
“And this, this will come handy when you come across a bear”, says Wlodek giving us a flare launcher.
“What else can I give you guys? What else can be useful?…”

Suddenly, his eyes fall on the Polish flag attached to his motorbike. Dusty, ripped at the seams – the one with a history of thirty thousand kilometres long journey.

“Listen, take it. Instead of going home now, it will continue the journey with you.”

In the year of the 100th celebration of Polish independence, the white and red flag is handed over. The Altai Mountains stand at attention.

Everyone knows that it is already time to hit the road. And yet, we are reluctant and drag on the farewell as long as possible. Something squeezes the throat. Eyes are watering. Probably from the mountain wind.

The inevitable cannot be put off indefinitely, and soon, Wlodek becomes just a disappearing spot on the horizon.

Soon we are also on our way. A dozen or so kilometres further, we reach a charming river. It would be such a waste not to camp here for a few days. We drive a little bit closer and …

The car, dangerously tilted to a side, howls horribly. A rear wheel spins, raising clouds of sand. An odour of burned rubber and exhaust hangs in the air. A tempting vision of a refreshing swim in a mountain river ended up in burying the car in a patch of traitorous sand.

“Bloody hell! We won’t make it on rubber traps! Pass me the plastic ones.”

Obediently I go to the trunk to pick the off-road traps purchased at Ulaanbaatar, especially for such occasion.

For a half an hour, we dig in the sand, push the car, use off-road traps, stones, tree branches, and whatever we can to free the vehicle from the sand trap. All for nothing. A pure frustration begins to loom on us.

And that’s when we hear a familiar sound of the police siren. A moment later, Wlodek appears, to whom we said our goodbye a few hours earlier.

“Oh, man! Don’t even tell me! I saw a nice mountain path, so I took it. All was good until this bloody stream. No way to cross it!”

Minutes later, all three of us are up to elbows in the sand digging and shovelling. Finally, Wlodek attaches a tow rope to his motorbike. As soon as he manages to pull the homebulance out a bit, four tones on wheels get stuck again half a meter further. The perfect work for Sisyphus.

Shortly, a woman comes out from nearby gers. In Mongolian and in a universal language of gestures, she explains that we have to back up where the surface is firmer. Well, that part we kind of figured out.

By the way, Wlodek asks her in Russian:
“This UAZ behind you – is it yours? Can we use it to pull our car out?”
“No. No petrol.”
Włodek pulls out his spare canister and gives it to a woman.
“Here is petrol for the UAZ then.”

The woman, along with the canister, disappears. A few minutes later, she returns without the UAZ, but with a whole family in tow.

“The machine is broken.”

If it’s broken, it’s broken. What can we do? We go back to digging, pushing, pulling, etc.

But this time, the woman entirely takes charge over the shovel. She kneels next to a sand-buried wheel and starts digging at the speed of a branded excavator. The sand flies to the right and left. While digging, she orders the kids around who obediently bring flat stones, tree branches, etc. And then our entire bunch starts to push the car out.

Everyone puffs and groans, but a moment later the homebulance stands on safe, firm ground.

We spit sand and laugh overjoyed at the same time. In the end, we do a photo session with an entire rescue team, who as a thank you receives Wlodek’s canister of fuel, home-made liquor, packs of cookies and the Polish national good – vodka Żubrówka.

We wanted to close the Volgograd stage quickly and efficiently, and hit the road toward Lake Baikal on Monday, 2...