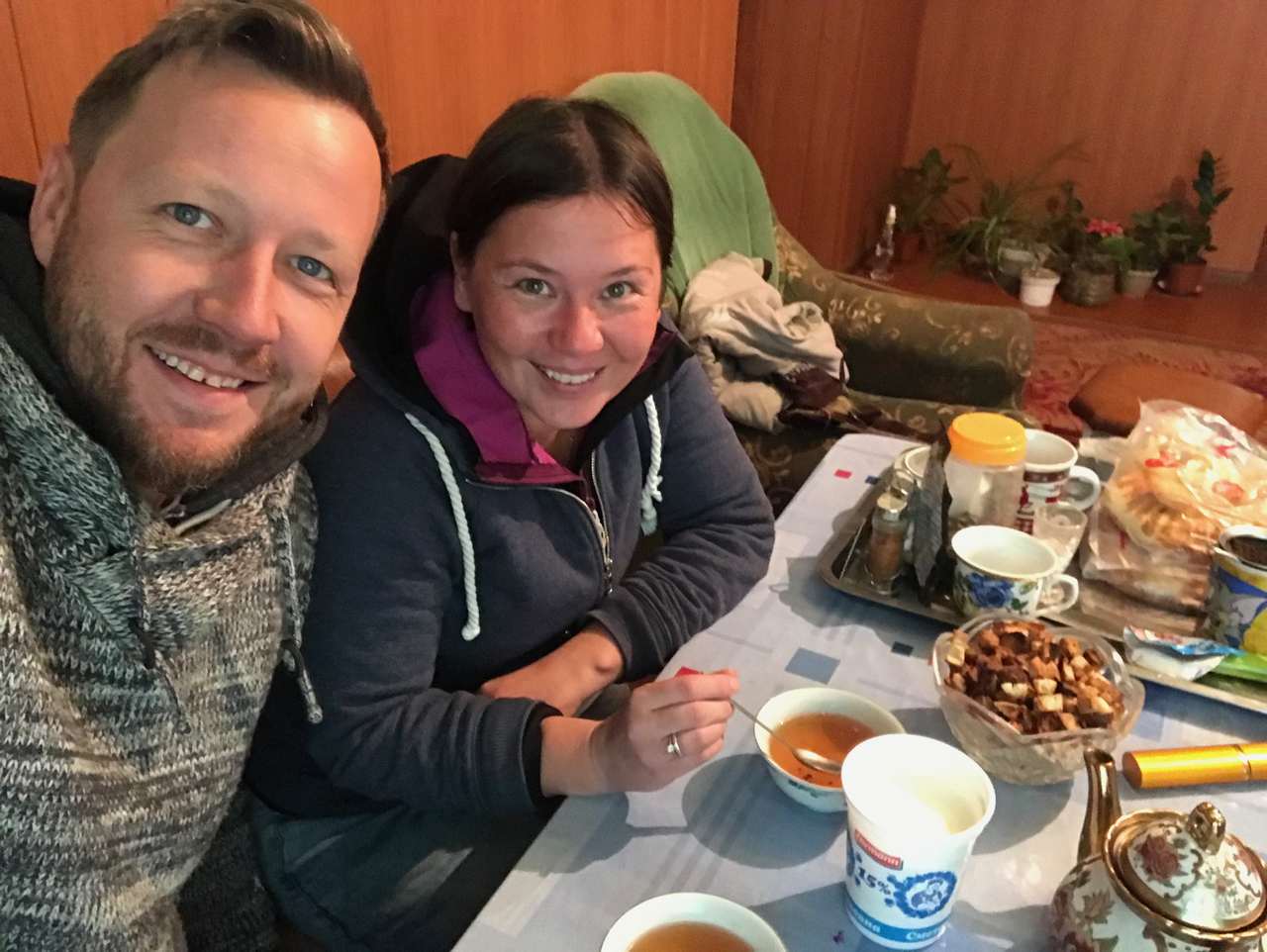 In the middle of the bare steppe, there is a large square. On the square – mud bricks arranged in the outlines of foundations. These ruins are all that is left of the once-great Otrar.

It was here, where the intersections of the main Silk Road routes converged. Today, only wind blows between decayed houses of almost 250,000 people. During its heyday, Otrar was famous not only as one of the most important trade centres but also as a technically advanced town. In the city undergrounds, water channels were leading to spacious city baths with massage salons. Furnaces on the outskirts of the settlement burnt beautiful ceramics. Scientists found the remains of these during archaeological works here.

However, it is not creation but destruction that immortalized Otrar on the pages of history. In the 13th century, the mayor of the settlement killed 450 members of the Mongolian caravan stationed here, whom he took for spies. Great Genghis Khan sent his diplomats to Otrar demanding explanations. Diplomats met an equally tragic fate. Khan’s revenge was terrible. He almost wiped Otrar off the face of the earth, opening his way for further conquests of Central Asia and Europe.

We walk along frost-covered paths, winding between the ruins of the oasis. We pass an empty mouth of the well, brick stumps of houses, frayed remains of minarets of the local mosque. Ages ago people were bargaining here on the market square marked today by red bricks. They exchanged information and stories from the trail over a cup of wine in local taverns. Today, only ghosts of past walk alongside us through Otrar alleys.

We return to the camper in nostalgic moods. During the two hours of sightseeing, the temperature dropped significantly. Outside there are -11 Celsius degrees, inside the homebulance – -4. The wind brings the first white flakes of the blizzard. At the parking lot, in the middle of nowhere, we try to start our homebulance. Unsuccessfully. The diagnosis is merciless – diesel fuel froze. The weather forecast for the next days promises a temperature well below freezing. If this continues, we will stay here until spring.

There is no other way. We have to warm up the fuel pipes. Only how? Maybe with a small flame thrower, which we got a few weeks ago from a kind soul, because: “Maybe it will come handy?”. A match after a match we try to fire up the contraption. The metal can spill gasoline everywhere, but it gives no flame. Minutes pass. Frustration grows. Suddenly, out of nowhere appears a man in a thick jacket and a fur hat. He immediately helps us with our task but also fails. In the end, the man calls a friend. A snowstorm appears together with a friend, who comes on a bulldozer from a nearby construction site. Two men huddled under the camper, finally manage to start the mini-flamethrower. However, gusts of wind either extinguish the fire or haul it uncontrollably in all directions. It looks like we are facing two options: either we freeze to death, or blow up the car, ourselves, and all the kind people who came to help us.

One of the men suggests the third solution. He calls his colleague, who turns out to be a local taxi driver. He squeezes Andrzej into the cab and takes him to the nearby villages in search of mechanics. In the meantime, I stay in the homebulance. The gentleman in a thick jacket and a fur hat accompanies me. We drink hot tea from a thermos and chat about his family life.

Two hours later, Andrzej and Azamat – the taxi driver come back.
“What took you so long?”
“Azamat was taking passengers all the time, and we could not find a mechanic. One does not know what to do, the other one is still drunk from yesterday, and the third one is nowhere to be seen. But there is still one in the village nearby. The tractor will tow us there.”
“The tractor?”
From behind the curtain, I look directly at the smiling face of a man sitting on the tractor’s saddle.

The towing takes only a few minutes. We stop in front of the garage adjacent to the grocery store. We look inside – closed. Azamat calls someone again while buying fresh bread and sour cream in the grocery. He packs us back into the old Lada and takes us to his home.

And here we enter paradise. In the centre of the spacious kitchen, there is a tiled stove. Through its open door, we can see tongues of fire warming entire room. We almost forgot what the warmth was. Azamat gives us hot milk tea and fresh bread with sour cream, which he bought especially for us, as it seems. He waits patiently for the blueness of our faces to disappear under a blush of warmth. Outside the window, the snow swirls in the falling darkness.

Finally, we go again to the mechanic, who is already waiting by the car. In the orange light of a bare bulb, he looks under a hood. He tries to unscrew something, turn something on and off. Nothing works. Andrzej desperately wants to use an autostart spray, but apparently, we already used it all up. Azamat packs him into the cab and drives on a search for a specific which, as it arrived, not only does not work but also drains out the barely living battery. The mechanic shrugs. The only way to resuscitate our homebulance is to warm up fuel pipes, and today it is too late for such actions.

Azamat takes over the initiative again. He drives us back home. This time, apart from the heat, there is a smell of a freshly cooked dinner. Azamat’s wife cooks rice and mutton in a large aluminium pot. The hosts treat us as they can best. They serve second, and third servings together with hectolitres of hot milk tea. They give us royal hosting and frown upon our decision to spend the night in the camper.

Meanwhile, the temperature outside drops to -17 degrees. In the ambulance, it is -11. Webasto heater froze along with the fuel. We fall asleep in five layers of clothes and under four covers.

The next morning it is still freezing but sunny. Immediately, we boil water and pour it over all the fuel pipes we can reach. The mechanic soon appears. He goes into action with all the blow driers he has in stock.

Over time, a growing group of curious people surrounds our homebulance. Everyone advises, suggests, helps as much as he can. Stubbornly our machine thinks nothing of the commotion that goes around it and does not start. Finally, someone throws the idea to pump out the frozen fuel from the pipes with a compressor. The idea seems to work – the car starts for a while but dies soon after. We try again. This time the battery drains again. No problem, though! We get a battery from the mechanic’s car, but a few further attempts at starting the homebulance end in failure. We try again the autostart. The spray mixture explodes directly into the resuscitation group gathered around the hood. The next idea – we make a fuel drip. Someone finds an empty plastic bottle, fills it with extra fuel and with a rubber pipe connects it directly to the fuel filter. The operation is successful. The patient lives. The engine growls steadily. We go nuts with joy together with the entire village of resuscitators.

We turn the engine off neither during the tearful farewell nor during the next three days and over a thousand kilometres to the border with Russia. Over there, the temperature is well above zero.

The engine works even when we visit the last point of our trip along the Silk Road – Turkistan.

Together with pilgrimages of the faithful, we admire a magnificent mausoleum of turquoise-beige ceramics. The pilgrims circle it clockwise, stroking it with the right hand in the prayer gesture. Their lips move in silent prayer. They worship the Sufi saint Khoja Ahmed Yasavi who gained the love of people thanks to his extraordinary gift of teaching Islam in a very accessible and understandable way also to poor, uneducated people. Yasavi’s esteem was so high that his resting place is hailed as the Second Mecca. In the fourteenth century Timur – the mighty ruler of Samarkand – erected a glorious mausoleum over the initially modest grave of the saint. With an image of the shrine of turquoise mosaic shimmering in the sun, we leave the Silk Road. Three days later, after a short stopover in Russia, we enter the Land of Fire – Azerbaijan.

We almost give up on Astana (renamed to Nur-Sultan in March 2019). The capital of Kazakhstan, which we reach at...