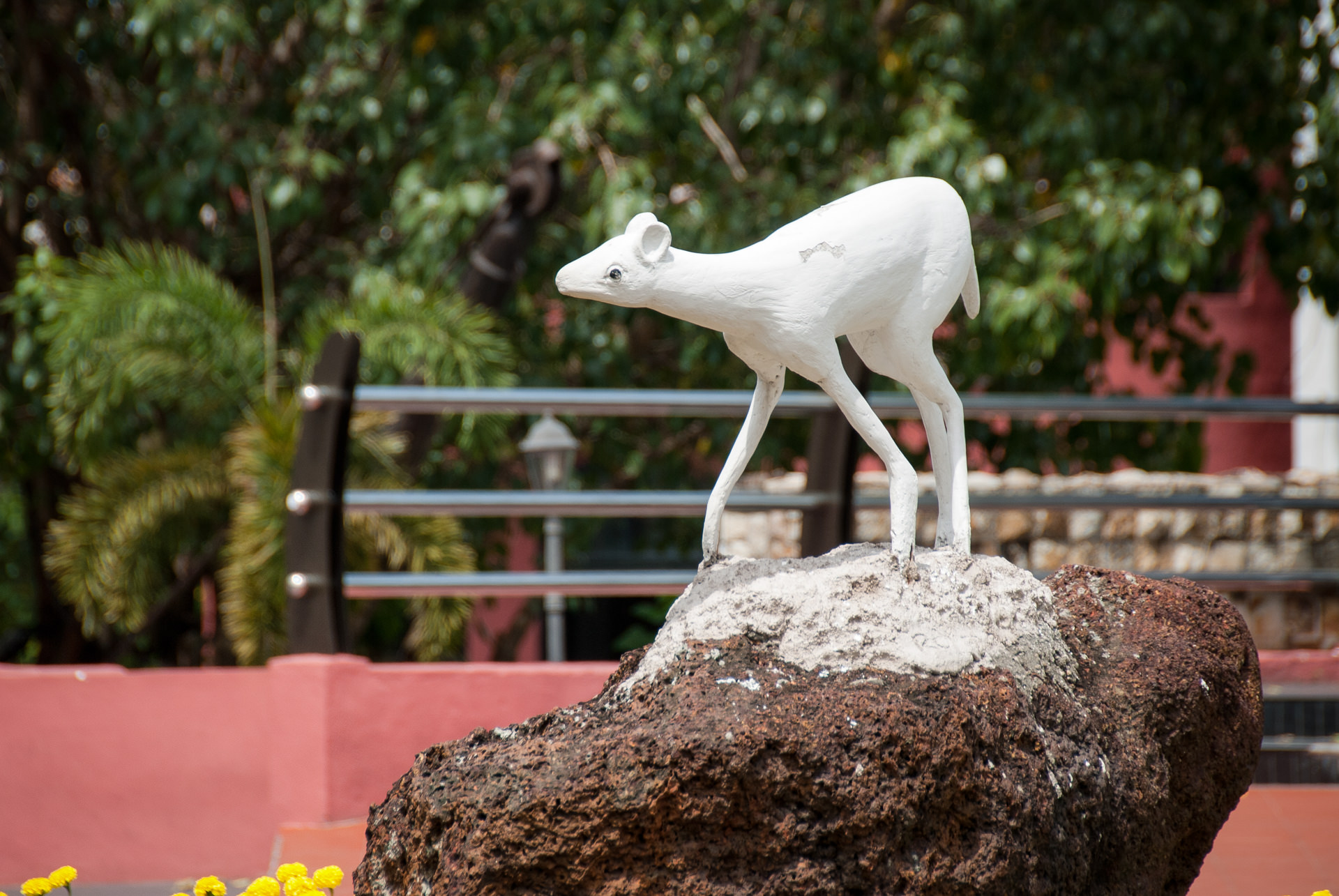 At random, we enter the nearest restaurant Harper’s Restaurant & Lounge and sit at a table right next to the huge open windows. On one side, there is a stunning view of a river bank and the old town. On the other – greens of the nearby grove. Below, runs a river cooling us with water breeze.

Windows lure with a diversity of views. Curiously, I go to one of them and stand nose to nose with an equally curious monkey. Beady eyes set in the tilting to the left and right head, carefully watching my every move. After a while, an animal decides that I do not pose any threat. As if nothing ever happened it goes back to the interrupted meal. Charmed, I cannot peel my eyes off the creature, when with the corner of my eye I catch another movement, in the shrubs at river shore. Bustling, forked tongue tastes the air. Amber eyes carefully watch the area. A dark and massive body of a monitor lizard emerges from the water, only to disappear in the foundation of our restaurant.

A few refreshing beers later we stroll along the Malacca River. A presentational promenade, full of bars and restaurants, extends on both sides of the water channel. Giant murals adorn the walls of almost every building along the way. Rows of pots with fantastically colourful flowers mark the route from one historical monument to another. Tourists take pictures at the big water mill of Malacca Sultanate while families with children stroll leisurely enjoying the relaxed atmosphere.

But only a glance over old vines partition – a second, completely different face of Malacca emerges. A provisional, makeshift barrier separates the tourist bliss from ramshackle huts, channels full of garbage and rats fighting for scraps. A thin veil protects the tourist eyes from the prose of city’s everyday life. It carefully covers the places that are not suitable for postcard photographs. But it is here, in those places that we meet the most friendly people – satisfied with what they have, although they have a little. It is here, where the laughter of children running around, muddy from head to toe sounds the loudest. It is here, where the grandma busy preparing afternoon meal has the kindest smile for us. The entire tourist splendour showcase turns into ruins in a collision with a real heart of Malacca. So carefully concealed.

A Red Dragon’s large body twists over our heads. The gaping, frozen in a silent roar muzzle greets in Malacca’s Chinatown. Another dragon is accompanied by a giant mask of Chinese lion. Big eyes, shaded with feather eyelashes squint at passing pedestrians.

The heart and soul of Chinatown – Jonker Street – vibrates with life. Crowds of people visit shops located on both sided of the street. Sometimes the stall is in an old garage with walls full of makeshift, wooden shelves. Sometimes it takes a form of a neat, newly renovated building with bright white walls. Whatever the looks, you can find here absolutely anything: from the typical souvenirs in the form of magnets, fans, sets of chopsticks, to clothes, DIY tools, spare parts, to caged parrots, rabbits, and other common household pets like iguanas.

Between the shops stand mandatory portable food stalls. On bamboo mats, there are deliciously puffy baos – small buns stuffed with anything you can dream of. The lady-owner, on a makeshift stove, steams another batch of deliciousness carefully closed in round bamboo containers.

“These baos here are with chicken and beef” – smiling vendor invites us to try the goods. “The ones with meat you should get for dinner. And those with red beans leave for a dessert” – she briefly concludes our purchases.

At the end of the street stands a makeshift stage. A small team is busy with cleaning up the remains of a show that has just finished. In plastic chairs in front of the stage, there are still the last spectators who do not at all hurry to disperse. We join them with our ample portions of baos and watch the perpetual motion and the bustling life of the street. In front of the shops, portable stalls on wheels start to appear. Just as their immobilised relatives they offer absolutely anything. Vendors bend over backwards arranging and displaying all the goods. They must make it before dusk. Jonker Street prepares for a weekend night market.

Malacca is the capital of one of the smallest Malaysian sultanates, of the same name. The historic centre of the town stretches along the banks of Malacca River and includes the hills of St. Paul with the ruins of the Portuguese fortress ‘A Famosa ‘(‘famous’), the Dutch Square (east side of the river ), and the old Chinatown (west bank). In 2008, thanks to its historical monuments and cultural heritage, Malacca was listed as the UNESCO World Heritage Site.

According to the legend, the city was established in 1402 in the place where the King of Malacca – Parameswara – saw a mouse deer fleeing from the hunting dogs. The animal, although small, was so quick and agile that it easily got rid of its pursuers. Parameswara took the occurrence for a good omen and created in this place the city of Malacca. The brave mousedeer has been immortalised in the city’s crest.

Thanks to a favourable geographic location, the city soon became the strategic centre of maritime trade and the richest port of the Malay Peninsula. News of a thriving city reached the Portuguese king – Manuel I. In 1509 the king sends his admiral Sequeira with an offer for Sultan Mahmud Shah. According to which, Malacca would become the Portuguese trade representative for the region of Eastern India. Although the proposal itself was met with positive response, the conflict appeared on the religious grounds. Sultan, fearing that the Portuguese would want to force the Islamic Malacca to the transition into Christianity, attacked Sequeira’s people. In the face of these events, Manuel I decided to militarily take over Malacca, which comes into effect in 1511. Portuguese transformed the port city into a fortress, which allowed them to monitor and control access to the Strait of Malacca, and thus the whole trade in the area.

Such a state of affairs irritates the Dutch and the Dutch East India Company (VOC), which was to have a monopoly on the colonisation business in Asia. Supported by local allies, the Dutch took over Malacca in 1641. In 1824 by the pact signed between the Netherlands and Great Britain Malacca became a British colony. This status remains until 1957 when Malaysia became an independent country.

The historical turmoil and a rapid growth of Singapore caused the port of Malacca to lose its importance gradually. The city began to decline economically. Currently, however, it is one of the most attractive tourist destinations in Malaysia. Its rich history and architecture, with numerous multi-cultural influences, have been appreciated even by UNESCO.

The largest community living in Malacca consists of Baba Nyonya (or Peranakan). These are the descendants of Chinese immigrants, settling on the Malay Peninsula. Baba is a courteous phrase meaning man, and similarly, Nyonya refers to a woman. Both cultures – Malay and Chinese – began to interlace. The effect of interacting is visible among others in religions of Malacca. The Chinese are followers of Buddhism, while Malaysians are mostly Muslim. A reflection of both beliefs is co-existing in Malacca side by side – Buddhist temples and mosques. On top of that, there is Christianity that has existed here since colonial times.

The remarkable insight into the Peranakan culture, its development and history offers the Baba Nyonya Heritage Museum. It is a home-museum, managed by successive generations of the family that once lived in the house. The building is located at Jalan Tun Tan Cheng Lock House – just 5 minutes’ walk from Jonker Street and Dutch Square. Groups of ten people or more can book the tour in advance using the link above.

The most popular area full of restaurants and bars is located along the Malacca River. Both its banks are covered with places where you can enjoy both local and Western meal, or enjoy a pint of a cold beer (11 – 15MYR/3 – 4USD).

The second recommendable place, especially when it comes to Baba Nyonya kitchen, is Jonker Street – the heart of the Malacca’s Chinatown. It starts right at The Stadthuys – the Dutch old town hall. The alley is filled with shops offering almost anything that comes to mind: from the typical souvenirs in the form of magnets to clothes and antiques. Between the stores, there are densely scattered small portable stands with local rarities. The best, however, Jonker Street leaves for the weekend nights, when it turns into a lively night market.

The city of Malacca is located in the south-western part of the Malay Peninsula. Extends on both sides of the Malacca River at the mouth of the Strait of Malacca. It is situated only 150km from the country’s capital – Kuala Lumpur.

A very stable climate of the place enables visiting it almost all year round. It should be remembered, however, that it is a tropical climate and as such scorching hot. The average temperature does not go below 30°C. Additionally, Malacca is “famous” as the driest city of Malaysia. Sun hats and sunscreens are mandatory.

Costs of living in Malacca are not expensive. For example, the local flagship dish at the food court – chicken rice balls – can be purchased at only 8MYR/2USD. More expensive restaurants will start to charge from 25MYR/6USD for a meal.

When it comes to lodging prices, a three-star accommodation near the city centre starts from 64MYR/14USD. Most hotels are located around the most famous points of Malacca such as ‘A Famosa’ or Jonker Street, which allows considerable savings on taxi fares. However, taxi tariffs are also quite inexpensive – about 2MYR/0,50USD for every 1.5 km.

An older man, tucked under a reed hat, stirs with a long ladle content of an aluminium pot that steams on a...

1:30 am – middle of the night. In a simple wooden, mountain shelter we are getting ready for an expedition to the...