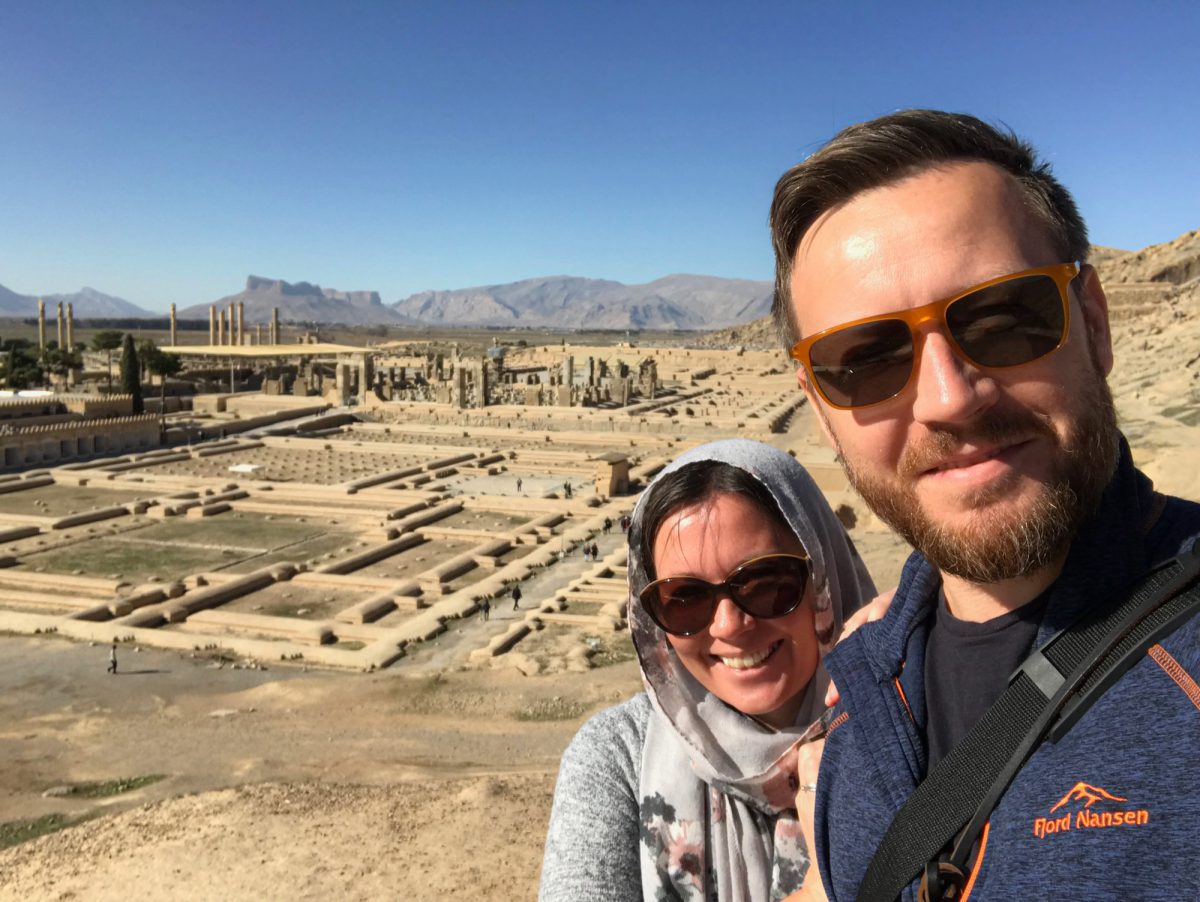 From Kashan, we head west to the third-largest city in Iran – Isfahan. During the Safavid dynasty (1501-1736), Isfahan was the capital of Persia and one of the most beautiful cities in the world.

Its rapid development made it an attractive place for migrants from the Caucasus region, incl. Armenia. To this day, there is an Armenian quarter in Isfahan with Armenian shops and Christian churches, considered to be one of the oldest and largest in the world.

Isfahan also played a considerable role in the history of Polish people. During World War II, more than 2,500 Polish children escaped from the USSR with the Anders Army. In Isfahan, they found shelter, food, proper care and education. Polish schools were created especially for them. An unofficial name of Isfahan can sum up the scale of small Poles’ presence there: “the city of Polish children”. Today, little remains of Polish presence in the city.

One of the most recognizable symbols of Isfahan is a massive square from the turn of the 16th and 17th centuries, known as the Imam Square. The place, inscribed on the UNESCO World Heritage List, is the first spot we visit in Isfahan. Its vast space (almost 90 thousand square meters), cut by manicured lawns and fountains with the water sparkling in the sun, makes us speechless from pure awe. Same as the majestic buildings surrounding it on four sides and a net of the bazaar stalls stretching under the arcades.

In the southern part of the square, there is the Imam Mosque. It towers over the site with a magnificent azure dome and 42-meter-high minarets shooting into the sky. Beautiful seven-colour mosaics and muqarnas ornaments resembling ceramic stalactites adorn the entire building. The Ali Qapu Palace, on the other hand, dominates the west side of the square. The six-story structure is famous for its music hall with many alcoves adorned with muqarnas. However, apart from being a fantastic decoration, they played a significant role in acoustics during concerts and banquets. In the eastern part of the square, there is another temple – the Sheikh Lotfollah Mosque. Historically, it is the first building erected on Imam Square. The Sheikh Lotfollah Mosque was intended only for the royal family. For this reason, the mosque is much more inconspicuous and has no minarets indicating the temple location. To protract women of the royal harem from the eyes of outsiders, the Shah ordered the construction of an underground tunnel running from the palace to the mosque. While today the mosque is open to everyone, the tunnel is closed for public use. The Grand Bazaar of Isfahan stretches along the north side of Imam Square. Carpets and tapestries reign in its shops huddled under arcades. The sellers welcome us with tea, biscuits and nuts with honey. Patiently, they present various kinds of carpets and explain the technique they were made with and their place of origin. Even if we do not conclude the transaction, the shop owners are more than happy, just to share their knowledge and Persian carpet-weaving traditions with us.

In the afternoon, we visit the Armenian district and the Christian Cathedral of the Holy Saviour from the mid-17th century. The building is an interesting combination of elements from Persian architecture and those found in the traditional sacred architecture of Christian churches (the presence of an apse and presbytery). Although any particular ornamentation does not distinguish the church’s facade, its interior is full of golden and colourful frescos. They present, among other things, the story of the creation of the world, the expulsion of man from Paradise and scenes from the life of Jesus. As it is the beginning of January, there is still a nativity scene in front of the church. Its wooden structure, right next to the decorated Christmas tree, makes us quite melancholic and aching for the family atmosphere of Christmas back in Poland.

To chase away the sorrows, we move to the vicinity of the Si-o-se-pol Bridge (the Bridge of Thirty-Three Spans). It is the largest bridge across the Zayanderud River. Or rather, what’s left of it. After decades of climate change and droughts plaguing the Iranian Highlands, the river is almost gone. The enormous bridge structure was erected at the beginning of the 17th century using the building materials typical of that era – dried brick, limestone and sarooj mortar. This highly water-resistant material consists of a mixture of limestone, clay, straw and egg white. At one time, Si-o-se-pol also served as a dam for the unruly waters of the Zayanderud River. Today we cross its bed scorched by the sun with dry feet. The jigsaw puzzle of cracked mud and a row of abandoned swan-shaped pedal boats makes a terrible impression. It makes you wonder how long the planet will withstand our abuse of its goodness.

A violent sandstorm that suddenly comes enforces this question. It mercilessly hits our homebulance, seriously damaging the windshield and side windows. Amidst this mayhem, we move from Isfahan to one of the driest cities in Iran – Yazd. The desert surroundings of the town influenced its specific architecture. Yazd owes it its unofficial name – “the city of wind-catchers”. Badgirs (bad “wind” + gir “catcher”) are towers with holes at the top, through which the wind blows in. As it travels down the tower’s chimney, it cools the main room of the house. Some houses have water reservoirs connected with “wind catchers”. The air flowing through the badgir cools the water, distributed later through a network of channels throughout the house. The largest concentration of beautiful badgirs is in the old town of Yazd, inscribed on the UNESCO World Heritage List. The city with the maze of narrow streets meandering between rusty-brown buildings dates back to the 5th century. Entirely made of adobe, it looks as if it grew straight from the sands of the surrounding desert.

Another way for Yazd to adapt to the desert climate was to use water from the nearby mountains. For this purpose, a network of underground channels was built. The permanent exhibitions at the Yazd Water Museum present the 4000-year-old history of technology, an explanation of how qanat canals work and the many ways of storing life-giving liquid. It is just 150 meters away from the Amir Chakhmaq Complex, located at the square of the same name. Two-story cloisters, looking like a fairy-tale castle, enclose the Amir Chakhmaq Square. They converge at the main point of the yard. Here, between soaring minarets, they rise three floors up, gorgeously decorated with azure mosaics. With the onset of dusk, a warm orange glow illuminates each arched vault of the niches and turns the complex into a truly fairy-tale sight. The cobbled square with its lush flower beds, fountains and lace of fairy-tale cloisters is our favourite place in Yazd. It is here where we come back from trips around the city for sweet pistachio ice cream or tar halva – a “juicy” kind of halva made of rice flour, ground cardamom and butter, sweetened with saffron syrup and rose water.

One such excursion takes us to the Yazd Fire Temple (Yazd Atash Behram). During the Sassanid era (224–651), Yazd was the centre of the Zoroastrian religion. Even after the Arab conquest of Iran in the 7th century, the city was allowed (based on appropriate regular fee) to follow the non-Muslim religion. Islam was adopted in Yazd gradually, and even though, over time, most of the inhabitants converted, presently, there is still a large percentage of Zoroastrians here. In 1934, a modern temple was built for the faithful. The holy fire, burning continuously since 470, was brought here. To this day, the priests are making sure that it does not go out. Fire in Zoroastrianism is the purest creation of Ahura Mazda – the Lord of Wisdom, the supreme and only god. Zoroastrians believe that the longer a worshipped fire burns, the holier it becomes, gaining more power to heal and fulfil prayers.

After a few days in Yazd, we head towards the legendary Persepolis. Before we reach it, however, we stop in the necropolis of the Zagros Mountains valley. Its slopes hide the last resting place of the Persian kings of the Achaemenid dynasty (550-330 BCE). At a rather considerable height, carved in the slope are tomb chambers of Darius the Great, Xerxes I, Artaxerxes and Darius II. The reliefs depicting scenes from kings’ lives decorate each of the doorframes.

Just 10 kilometres away to the south are the remains of the ceremonial capital of the Achaemenid Empire – Persepolis. Alexander the Great plundered and almost entirely destroyed what used to be a magnificent complex with a palace, audience halls, a treasury, military quarters and huge stables. One legend has it that the Macedonian burned the place in a drunken amok to celebrate the victory over the Persians. Historians, however, believe that the fire was set in revenge for the destruction of Greek temples during the Greco-Persian Wars.

Even though Persepolis’s splendour is only an echo, it still sounds with magnificence and power. The site remnants look as if they are avalanching down directly from Mount Rahmat (“Mount of Mercy”). The wide steps lead to the main palace platform. It is said that the Persian nobles climbed them on horseback, not to compromise their status by walking on foot. Intricately carved stone columns cover the main limestone terrace of the complex. The mythical creatures at their peak were supposed to guard the riches of Persepolis. As history shows, even they could not stand up to Alexander the Invincible.

Constant conversations with chatty Iranians enrich our stroll along the alleys of Persepolis. They tell us the history of the place, ask where we are from and how we like their country. Sometimes they just want to practice their English or take a quick selfie. Everyone constantly invites us to picnic with them. Iranians love picnics and being out in nature. In the parks or at any lawn or green patch (even the one in the middle of a roundabout), you can find whole families sitting on blankets and feasting on dried fruits, nuts and honey. Any place is good for a picnic – the national hobby of Iranians. Unfortunately, we cannot take advantage of the invitations because Shiraz – the city of poets, gardens and nightingales – awaits.

When we finally obtain a visa to India, we leave Tehran. Before we cross the city border, however, we stop at the...

Only late at night, we manage to leave the Russia-Azerbaijan border crossing. We still have to drive a few dozen...