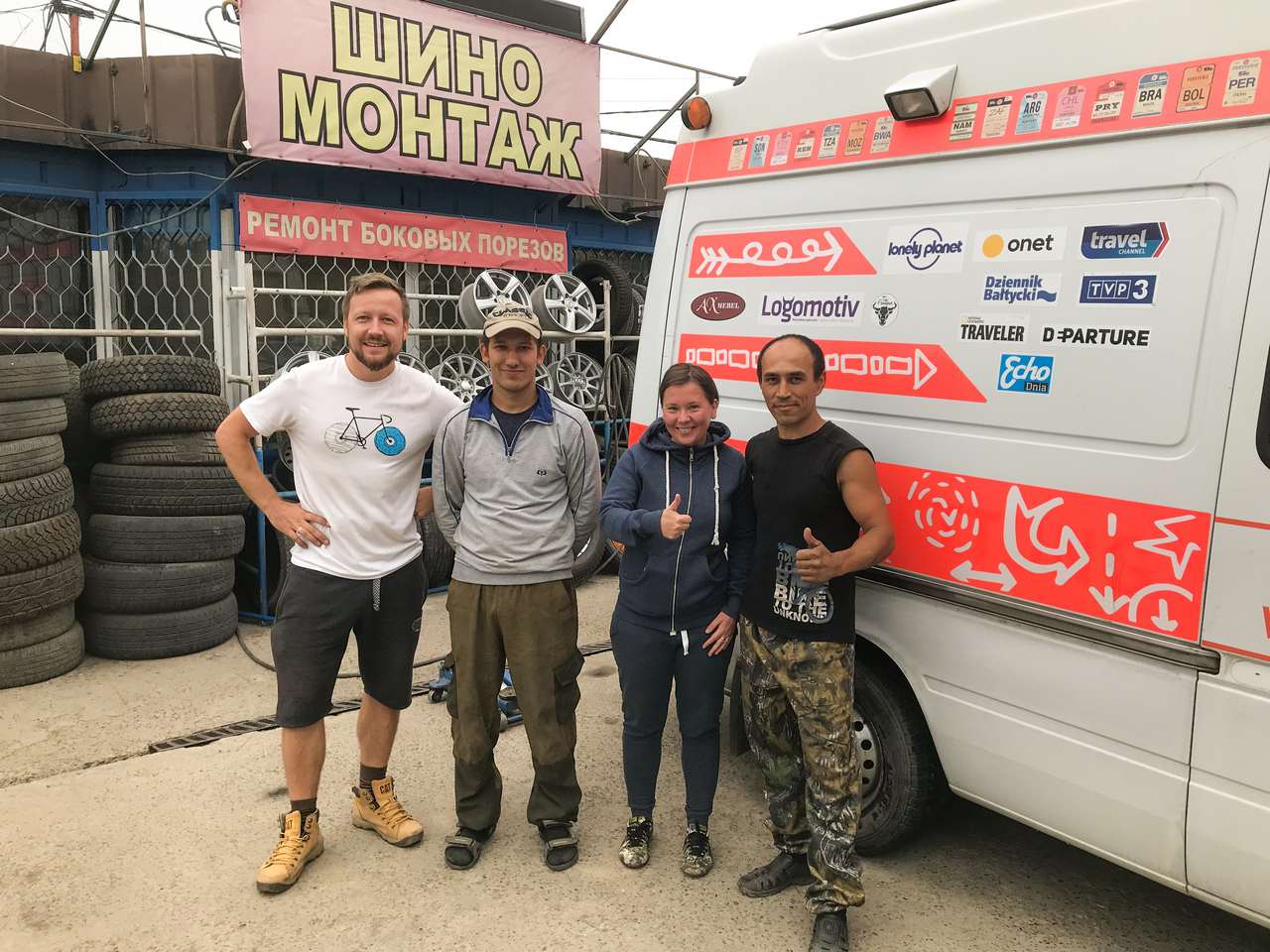 A meeting with Nikolai, which after a bottle of moonshine, ended up at the border with Kazakhstan, cost us driving through the sideroads of nightmarish state.

On these, the holes were more frequent than the asphalt patches. Finally, we managed to reach the main, proper road, which led us through the mountains, then hills to plains. Plains breathtakingly beautiful, with bright green meadows, golden colza fields, shimmering sapphire lakes and white birch copses.

Among such scenery, at one of the stops, we meet Dawid, who is on the way to Wierszyna. It is a Polish village about 100 kilometres away from Irkutsk. He carries school articles and toys for children from the Polish school, and a vacuum cleaner for the teacher.

Apart from the school, there is also a Polish church and a Polish Community House, in Wierszyna. They serve the population of about a thousand people – descendants of voluntary Polish emigrants. Wierszyna is a tiny Poland in Siberia.

Over a shot of vodka, we solemnly promise that we will meet Dawid again in Wierszyna. After all the shots are drunk, and all the promises made, Dawid sets off. We soon follow.

Near Novosibirsk, the ambulance begins to make disturbing noises. Disturbing enough, that we decide to visit roadside mechanics. After a few repetitive: “Sprinter?!? Oh man! Where do I get the parts from?! “, we are forced to attend an authorized Mercedes service.

The service welcomes us with coffee, biscuits and comprehensive diagnostics, which decrees the compressor and steering rods replacement.
“Do you have these parts in stock?” we ask the manager.
“No, but we will write to our counterparts in Moscow, and they will send them here in no time.”
“OK, but how long would this take? It’s Wednesday, and our visa expires soon.”
“By Friday, the latest.”
We leave Novosibirsk on Monday evening.

Two hundred kilometres further – roadworks. The left lane terrifies with asphalt stripped from the surface, bare gravel and holes hidden under puddles of rainwater. We drive on the right lane, though — the renovated one, as smooth as a table.

The homebulance swerves to the right. The steering wheel nearly jumps out of my hands. The metallic grind coming from behind, I can feel straight in my teeth. I stop immediately, just where I am. Behind me – the line of trucks. The curses and swearing are nearly tangible.

The flat tire turns out to be an “exploded tire”, in five places. It burst just 200 kilometres away from Novosibirsk, where we spent the whole weekend in the Mercedes service waiting for the steering rods fix and some spare parts.

Warning triangles, the jack and a spare tyre are put to work. The gravel shoots out from under the wheels of trucks passing us by on the left lane. I wonder if they aim premeditatedly?

Two hundred kilometres further, we reach Krasnoyarsk. There are car services all over the town. None of them has a tyre in our size. Mechanics send us from one place to another. Minutes stretch into hours of growing frustration.

Finally, somewhere, somehow, someone says the magic words – the Aviators Street. We drive into paradise. On the gravel square between the highway lanes, there are numbers of small booths. Next, to each, there are wheels, tyres, wheel rims up to the horizon. We nearly cry overjoyed.

“Do you have Sprinter tyres?”, asks Andrzej in of the booths.
Instead of answering, a slim man in working overalls turns away and begins to climb onto the roof of the shack. We look at each other puzzled.
“Yup! We have some!”, he shouts back at us from the roof, which turns out to be a ‘storage room’.

There are two mechanics in the booth – an older and a younger one. Both are from Uzbekistan. Both are curious about our car and the journey. The elder is quieter, more distant. The younger one is a joker. He talks and talks and talks. Demands us to show some Polish money, to laugh at their small size. In return, he proudly presents a lovely rubble banknote issued specially for the World Cup.

“And what do you have there, behind the curtain?”, he asks peeking into the car.
“A shower and a toilet”.
“Waaah?!?! You have a shower in the machine?!?”
“Well yeah, but as tiny, as our whole house on wheels”, replies Andrzej.
“It may be tiny, but at least you have one”, he gets serious straight away.

The younger mechanic teases us again:
“Couldn’t you go this way instead?”, he asks while drawing with a finger a straight line between Poland and Alaska on our map printed on the car. “It would be way, way easier, comfier and you wouldn’t destroy the tyres”, he jokes mercilessly.

As in confirmation of his words, the spare tyre starts to hiss loudly, and the whole air goes out. An utterly rotten piston shoots out of the tyre straight under the feet of the mechanic. He bends down, raises it to his eyes and sends a very meaningful look towards the sky.

Enriched by the newly acquired wisdom of life and a repaired tire, we finally drive off towards Irkutsk. Unfortunately, we have to skip Wierszyna. The end of the visa looms over us.

Russia - the streets without white bears

After all the action of digging out our unfortunate motorhome, we stopped in Mongolian paradise. Over a mountain...

Three countries, 3,800 km and two weeks after the start of our journey around the world in an old ambulance (aka...