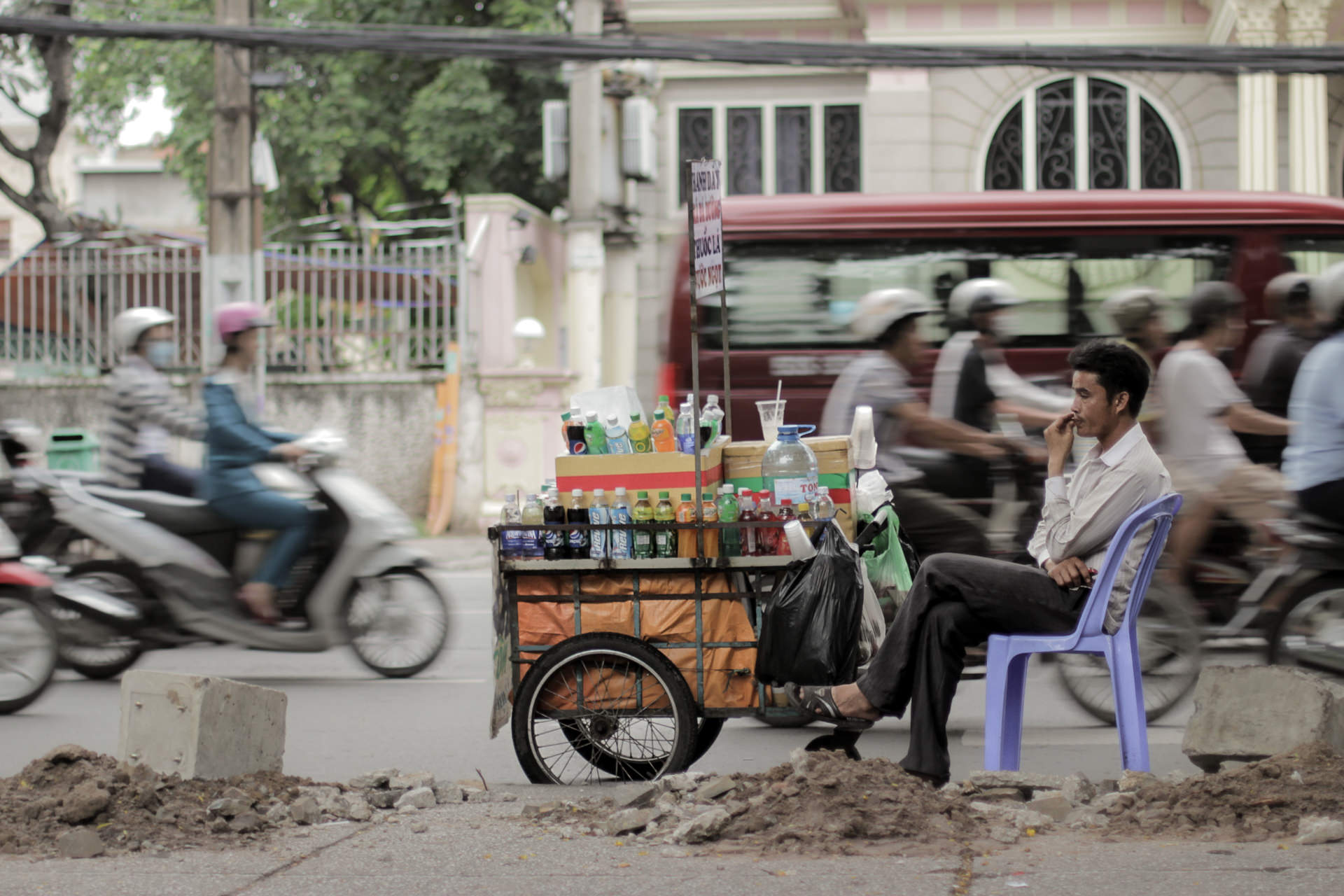 A two-storeyed, angular building with grey walls, stained with mould and mildew. Sandwiched between other, similarly begrimed by torrential rains of the monsoon season, a sizzling sun of the dry period, and fumes of everyday heavy traffic.

The first-floor windows extend to a view of thick black electric cables running through the entire length of the street. Bright with neon signs ground floor vibrates with life.

“What is it going to be today?” asks a tiny woman, with a sigh of relief removing from her shoulders two baskets. Both, connected with a bamboo stick, are overflowing with fresh fruits.

“As usual. Some apples, dragon fruits and lychees.” replies a lady owner of the scooter rental shop and halfway stops sweeping the parking lot. Instead, she reaches to a standing nearby container with cold water, fills in a plastic cup and gives it to the street vendor.

“Thank you. The heat today is impossible again.” selling lady accepts gratefully refreshing liquid and adjusting a cane-woven, conical hat on her head asks: “Husband is not in today?”

“Oh, no, no! He is in! Over there, in the shade” the shop owner replies, pointing towards a row of scooters behind her. There, in a cooler, shady corner, stretched through seats of three vehicles lies the business owner. Fast asleep. In an elegant, white shirt, black suit pants – he is ready at any time to strike a deal. Even in his sleep.

Next to him, on a makeshift, tiny, portable grill a hawker barbeques meat and seafood. The mouth-watering fragrance of grilled chicken and prawns in hot soy sauce fills the air. At the corner – a trolley stand with soft and hard drinks. In the shade of its umbrella customers haggle with the sellers. A group of local men, near the cigarettes kiosk, roars with laughter. They watch a young tourist and his photographic object – an owner of the cigarettes stand blissfully snoring under the shelter of his cane-woven hat.

A sudden noise on the street turns their attention. In the middle of the road lay a scooter and its cargo – tied with strings and ropes stack of cardboard boxes. As nothing ever happened, the driver gets up, flicks the dust from his clothes and adjust slightly slanted helmet. Observers of the incident slowly and nonchalantly step into the non-stopping traffic. Countless cars and scooters magically avoid them as if an invisible magnetic field surrounded them.

“Great! Done! Are all the boxes loaded?”

“Yes, yes! All fifteen. Thank you! I’m on my way to pick up a bed frame and all these are to be delivered to a customer beforehand.”

Dispersing men are passed by a scooter with a family glancing at the occurrence. A five-year-old toddler, standing on a footrest in front of dad-driver, opens his mouth in astonishment. At the back, mum tries to keep in place two youngest offspring, who are lifted from her safe embrace by extreme curiosity.

Since 1976 Ho Chi Minh is the official name of the city formerly known as Saigon. After South Vietnam had lost in the Vietnam War, Saigon was renamed in honour to the leader of the Communist revolution, the prime minister and later president of the Democratic Republic of Vietnam. The population of this located in the south-eastern part of Vietnam metropolis consists of 10 million people and makes is the most populous region in the country. Ho Chi Min has a very humid (approx. 80%) and hot (average temperature 28°C) climate, with two main seasons: rainy (May – October) and dry (December – April).

The origins of Ho Chi Minh City are inconspicuous. Ancient times find it, as a small fishing village, Prey Nokor. The area covered vastly with swamps and marshes is originally inhabited by the Khmer. It passes in the hands of the Vietnamese in the seventeenth century on the occasion of a marriage between Vietnamese princess and the Khmer prince. Matrimony is intended to prevent constant assaults on the Khmer by Vietnamese. Gradually, however, it is Vietnamese who take over the area and the Khmer of Mekong Delta become a minority, almost entirely separated from their compatriots in Cambodia. Those, weakened by ongoing wars with Thailand, are not able to recapture their lands. In time, Prey Nokor transforms into Saigon – a thriving and steadily growing port.

In 1859 Saigon falls under the French occupation. The remains of an architectural and cultural heritage of this period contribute to the city’s nickname: Paris of the Orient. It was not until nearly 100 years later, in 1945, when Vietnamese regain independence. For the next decade, Vietnam is divided into the South and the North. Supported by the United States South (with Saigon, as the capital) fights against the communist North, under the leadership of Ho Chi Minh. In 1976, after the South losing the Vietnamese War, Saigon is renamed to Ho Chi Minh City – in memory, to the late political leader.

Scooters are Saigon’s phenomenon. There is plenty of them everywhere and quite often they avoid following the traffic rules and regulations. Similarly to other vehicles. Crossing the street resembles crossing the Red Sea by Moses. Once you step on the road, a continuous stream of machines divides and you can pass unscathed. A major rule is to avoid running through the street.  The recommended pace – slowly and steady.

If walking around the town is not an appealing option, you can rent a scooter. There is plenty of rental shops in Ho Chi Minh. You can either go to a random one spotted along the way or find a rental shop online. An average price per day – 200,000VND / 9USD. A driving license is a must.

Another option for getting around Saigon are taxis or bicycle rickshaws. While the rides are both efficient and effective, you need to be on guard when it comes to related charges. In the taxis, you need to make sure that the taximeter is on. If it comes to a tuk-tuk ride, you need to explicitly agree on the price at the very beginning of the trip. Unfortunately, the last option does not always work, and the final fee can drastically change.

It is the best to avoid the rainy season between May and October. Torrential rains, not only spoil exploring the city but also flood roads, making it difficult to move around and visit the neighbouring area.
[/vc_column_text][/vc_tta_section][vc_tta_section i_icon_fontawesome=”fa fa-usd” title=”PRICE” tab_id=”1474034884791-aa718566-3209″ add_icon=”true”][vc_column_text]

Vietnam is an affordable place, although its growing popularity does contribute to the steady rise in prices. A sample budget per night in a four-star hotel in a period of June-July starts from 35USD / 781,000VND per night. Restaurant prices range between 2.5USD / 56,000VND and 50USD / 1,116,000VND depending on the eatery. Of course, there are places where a meal costs a few hundred dollars, which translates into millions of Vietnamese dongs. Budget travellers will enjoy very widespread in Vietnam street stalls offering local delicacies at prices starting from just 0.50USD / 11,100VND.
[/vc_column_text][/vc_tta_section][/vc_tta_tabs][/vc_column][/vc_row][vc_row][vc_column][vc_column_text]

The Pinnacle@Duxton - the bird's eye view at Singapore

Vietnam is a country that has plenty to offer regarding tourism. Beautiful beaches, scenic mountains, bustling...