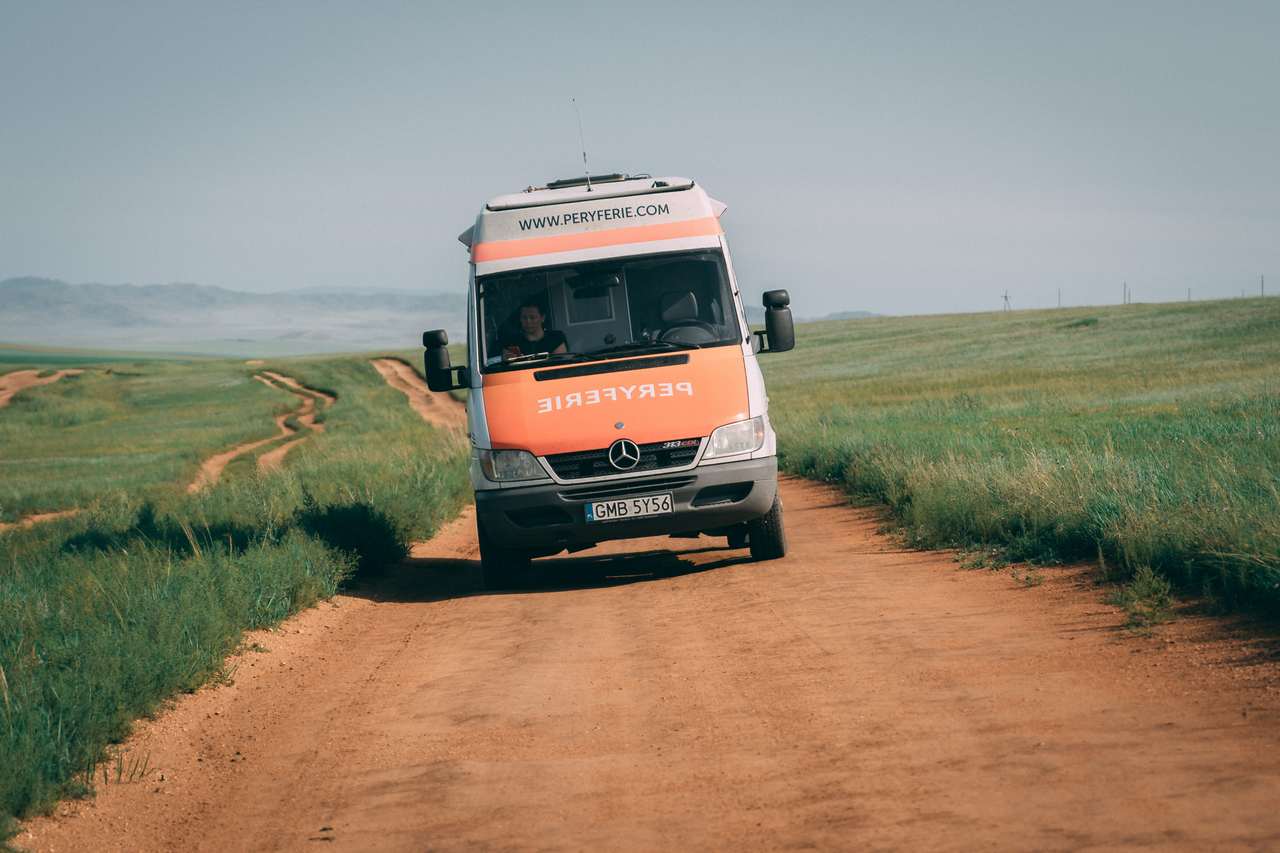 Russia-Mongolia border crossing. In the chaos, a mass of bodies waves their passports feverishly and presses us to a customs counter.

After a fight for our lives, we get visa stamps and return to the car. Here, a very serious-looking custom officer awaits us. With a white-gloved hand armed with a mirror on a long pole, he checks the car chassis. Oddly, the officer is more interested in the chassis than in the content of plastic boxes filling the car trunk. We do not object and wait politely in silence.

“Are you going to Ulaanbaatar? Can I tag along?”, suddenly a young Ukrainian girl asks us in English.

Picking up a hitchhiker at the border crossing? That is a first.

In the end, the two of us left Russia, but we enter Mongolia as a party of four. Just before leaving the border zone, a young Polish guy joins us. We pick up hitchhikers like mushrooms after a summer rain.

The guests make themselves comfortable in the ‘homebulance’ living room/kitchen/bedroom, and off we go! The tremendous Mongolian adventure awaits!

Two hundred meters further, it turns out that one of the customs officers has not stamped some piece of paper properly.

And so, we return to the chaos of bodies, passports and documents.

After six hours at the border crossing, our energy level allows us only to reach the nearest eatery. An older lady-owner with a storm of beautiful black curls greets us. With apparent expertise, she recommends a sweet red borsch and a sour okroshka for ladies, and meat with eggs served on a sizzling platter for gents — a delicious heart attack on a plate.

It is 4 pm, and there are only 350 kilometres left to Ulaanbaatar – not too bad. Considering that the narrow, but asphalt ribbon-like road stretches up to the capital, we should reach the target in four hours tops.

The first kilometres are indeed beautifully smooth — the road snakes among the lush green and infinite sea of steppes. Its greenery, over a thin line of the horizon, meets the equally endless azure of the sky. Rarely, here and there glisten white canvas of gers – the traditional tents of nomads and herdsmen. Each of the gers has a pen for livestock. Over and over again, sheep or goats block our route with an adorable shaggy and bleating traffic jam. We love it!

All goes well until numerous holes start to pop up under our wheels. The holes, finally change into craters gaping with black nothingness. We abandon admiring the fantastic landscape and concentrate entirely on the road slalom. It goes quite okay until it starts to rain. The azure of the sky changes into greys of dirty canvas and finally into deep blacks when the night falls.

Sudden braking, sharp turns, screeching tyres and our hitchhikers ruthlessly tossed around the ‘homebulance’ living room, mark the rest of the route. The four planned hours stretch out into eight, equally filled with curses and prayers.

And on top of that, these hellish headlights! All drivers alike, seem to completely ignore the existence of dipped lights and immediately switch to a full beam. That they dazzle oncoming traffic? Well, drivers coming from the opposite direction also use the full beam so what the issue is?

In the end, however, half-blind and exhausted, against all the odds, we reach Ulaanbaatar.

The capital is a chaotic city. Everywhere we can see construction sites that look like they have no idea how to develop further. Around the half-finished buildings stand heavy machines looking like abandoned dogs – someone left them here and never came back. Such sights are present in both: the city centre and the outskirts. Possibly, most of them will eventually turn into blocks of flats. It looks like the demand is high. Of the three million population of Mongolia, 1,5 million lives in Ulaanbaatar. On top of that, there are seasonal mini-towns of gers appearing around the capital in the winter. Thousands of people head to Ulaanbaatar, where it is easier for them to get food and fuel during freezing temperature reaching as low as fifty degrees sub-zero. Temporary population growth is manifested, among others, by a dense, black cloud of smog hanging over the capital.

And yet, with the onset of spring, the masses of ice and people melt. Gers move back to boundless steppes and pastures, perfect for livestock. Attachment to pastoral traditions is probably too great to compromise it in favour of confining oneself in a concrete cage of an apartment despite all the convenience that goes with it.

The chaos of the capital – however incredible it sounds – is also its positive and unique symbol. Streets of Ulaanbaatar are very cosmopolitan. Not only concerning more or less lost tourists but also in services that the city offers. Korea and Japan are the market leaders in both gastronomies (restaurants, food products) and cosmetics (beauty salons, spa, whitening creams). Also, there are Chinese karaoke lounges and large shopping malls with the finest Western brands, standing next to tiny convenience stores. Everyone will find something for themselves – those who spend millions of tugriks with a light hand, and a poor backpacker alike. Ulaanbaatar is a political, financial, economic and cultural centre, but in a very homely, familiar package.

After a few days in the capital, we decide to take a short tour to Tsonjin Boldog, located just sixty kilometres to the east. And yet again, we are going through a green and blue painting-like landscape, which someone forgot to frame. When it seems that it cannot get any prettier, the steppes begin to rise in waves of hills. A silver colossus towers over them – the mighty Genghis Khan on a steel stallion. The 40-meter tall monument – the tallest in the world equestrian statue of Khan – was raised to commemorate the one who in the 13th century united Mongolia and made it an empire. The figure stands in the place where, according to the legends, Khan found a golden whip, which inspired his future conquests. The monument faces east, towards Genghis Khan’s birthplace.

For a short while, we admire the colossus from the perspective of an ant, and then we climb a very narrow staircase to reach a tiny observation deck located on the horse head. The deck may be inconspicuous, but the view that extends from it is incredible. Heavy cotton of clouds lies on the distant, grey-black mountain peaks. In front of them, the lush green of gentle hills brightly cut off from the dark sisters in the distance. And then the sun begins to set – bloody, terrifying and terrific. The silver of Genghis Khan’s statue turns into a fiery ruby.

Admiring the fantastic sunset, we forget about a teeny-tiny detail of finding a place to park our ‘homebulance’ for the night. We end up sleeping in the middle of something resembling a quarry.

The next day, we spend stacking up on provisions for a month of driving through Mongolia. In Ulaanbaatar, we find a huge supermarket and roam around shelves with childlike enthusiasm. On the shelves – Korean products. Of course. But what’s that next to them? Wait, do I see well? I don’t wear my specs, so I’m calling Andrzej over.

No way! We go through every shelf in our reach, and we have transferred back to Poland: KOWAR gherkins, KOWAR vegetable goulash, DAWTONA pasta sauces. I cannot hold tears of joy when in the sweets department, we see MIESZKO chocolates. The sweet taste of home.

A few hours later, we drive our car with a patriotically stuffed trunk, towards Tashanta – the western border of Mongolia. Our visa expires in 30 days, so there is no rush and the car rolls unhurriedly through a flat, golden steppe.

Less than a hundred kilometres away from the capital, we drive off an asphalt road onto a sandy path broken with a heat of the sun. It leads to the smallest national park of Mongolia – Khustajn Nuruu. It is the only non-governmental park operating in Mongolia. Its relatively small area covers 506 square kilometres and is famous for the efforts to restore the population of Przewalski’s horses to the world. The origin of this animal is just as mysterious as its almost complete extinction. Mongols call them Takhi – spirits. It is the world’s last wild horse that has never been domesticated.

In 1879, the Russian general and geographer Nikolai Przewalski for the first time noticed and collected materials concerning beige, stocky horses with a very short mane and a complete lack of fringe. Already then – named in the explorer’s honour – Przewalski’s Horses were an endangered species. In 1900, a broad action was taken to catch animals and transfer them to zoos in Europe. From this group, 13 reproducible individuals contributed to the rebirth of the species, which in the 1960s was announced extinct in the wild. Currently, the worldwide cooperation of scientists managed to rebuild the population of wild horses in their natural habitat and almost 300 Przewalski’s Horses walk around the Khustajn Nuruu National Park.

When the setting sun cast streaks of gold on the green hills of the park, small, stocky horses come down to the waterholes in the valley. They walk lazily, unhurriedly. They know that they are at home. Drinking water from a narrow stream, they snort and neigh satisfied. The bright beige heads move briskly up and down as they try to get rid of annoying flies. If this is not enough, they roll in muddy puddles, to cover the fur with thin black armour. The young generation of thin-legged foals with a loud neigh follow the footsteps of the elders. Now and then, fluffy fur balls swish between the horses. Marmots. They are also under the protection of the Khustajn Nuruu National Park.

After two days spent in the company of “spirits” and marmots, we continue our journey west, towards Karakorum – the former capital of the Mongol Empire.

In the middle of the bare steppe, there is a large square. On the square – mud bricks arranged in the...

We are waiting in the queue for tickets to the Buddhist temple of Erdene Zuu. Among the number of locals, we are...