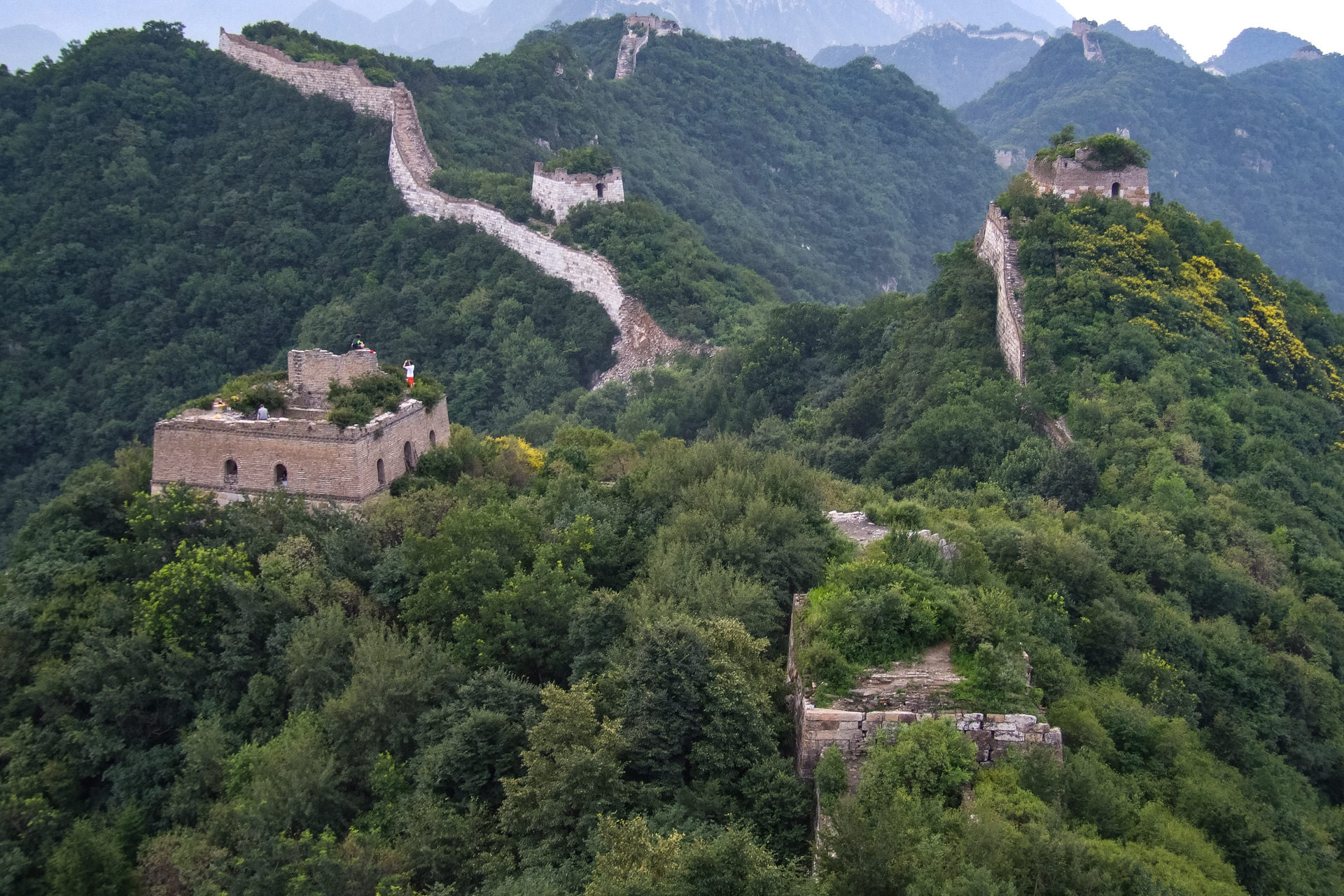 A tiny mountain village. A patch of asphalt only occasionally appears on the narrow streets. The rest is covered in gravel and sand.

A lush greenery of the bare corn plants stretches in front of the old but charming stone houses. The fruits, arranged in neat stacks, dry off in the sun just next to the field. In front of the corn garden – a small wall made of piled up stones and pebbles. In the background – a massive and majestic mountain range. The fog of clouds wanders between their black peaks.

The village is the starting point. With sleeping bags and mats swaying from the backpacks, our group moves on to the Great Wall of China. Everything starts very inconspicuously. Quick march between the endless green fields and plots. Conversations and comments on how easy it is to move on this flat and easy track. Shortly, the fields turn into woods, a smooth road into a narrow, rocky and steep path. Instead of conversions and comments – quickened breathing.

Several meters further, trees part to reveal an awaited sight. It does not, however, resemble the Great Wall of China from the postcards or tourist magazines. Instead of perfectly cubic-shaped teeth of fortifications – an avalanche of rubble stones. Instead of the wide, smooth sidewalks friendly to flip-flops and high heels – an uneven surface, frightening with the image of falls and bruised knees. The unrestored part of the Wall – Jiankou – retains its originality and severity of hundreds of tough years it survived.

The proximity of one of the architectural wonders of the world fills our group with a fever of excitement. Suddenly …

“We can’t go up”, someone closer to the Wall shouts towards us.

“They don’t want to lower the ladder.”

Who? What ladder? Our eyes follow the hand pointing to the top of the wall. At its highest point, just above a path trodden by multiple trips, sits an elder lady. A hat with a broad brim shields her face from the increasingly warming sun, while she sips tea from a small thermos. Below, agitated guide heatedly discusses with the grey-haired grandpa. There pass long minutes filled with gesticulations and hurriedly thrown words. Finally, the guide reaches into his pocket for a wad of banknotes. At the same time, the makeshift wooden ladder slides towards our group. The elder couple wishes us a joyful and a safe trip.

From the first steps on the Wall, it becomes evident that the expedition will not be the easiest one. Tottering cubes of stones slide from under the feet. Remnants of steep stairs lead up and down. Soon, stairs turn into drifting down patches of loose rocks or almost inaccessible walls, shooting into the sky. Each section of the path leads to a thorough analysis of all the protruding stones and holes, searching for those which can be used as a hand and foot support. And then the path disappears altogether. There is only a remnant of the fortification wall and glued to it a narrow strip of beaten earth. That’s on the right side. On the left, there is a stones rumble, disappearing between the crowns of trees. Clinging to the remains of the wall on the right side, we are moving step by step, trying to ignore the gaping chasm of a non-existent left side.

A few hours later we reach our night stop-over. One of the reasonably well-preserved guard towers will be a shelter for tonight. For the first time since we started, we stand on solid ground. Even so, legs tremble from the continuous efforts and also from something that is far from physical sensations. For the first time, we can stop and soak up the phenomenon of surroundings. The magical view of an endless thread of the Wall, appearing and vanishing among the treetops. Vastness of green forests, black sharp mountain peaks and blue summer sky merging with the line of the horizon. The view, priceless because of its beauty, thanks to the phenomenally tough journey pleases double.

A little over an hour is left until nightfall. Some of us scurry through the small corridors and nooks of the tower in search of a sheltered place to sleep. The rest is preparing bonfire. Tower walls and roof of the sky form an atmospheric patio. Soon, in its centre the fire cracks, chasing away evening chill. Suddenly, the falling darkness of the night echoes with shouts of joy and cheer. Porters from the village down in the valley brought hot dinner and cold packs of beer. Above us, fireworks brighten the night sky. The remains of one of the holidays make our night even more magical.

Jiankou – the dangerous beauty of the Great Wall of China

The Great Wall of China is a series of fortifications built along the historical northern borders of China. It stretches from Dandong in the east to Lop Lake in the west. The total length of all the sections exceeds 21,000km. The Wall was raised mainly to protect against invasions and attacks of the barbarians of the Great Steppe, but it also functioned as a border barrier, helping to control the duty on goods from the Silk Road.

The individual parts of the Wall were created at different times and eras. The earliest fortifications date back to the 7th-century b.c., and the best-preserved ones are from the Ming Dynasty (1368-1644). The total length of the latter is 8850km, of which 6259 are the actual walls – the rest consists of natural hedges in the form of hills, rivers, trenches, etc. During the Ming Dynasty, almost 25 000 of watchtowers were built. They were used by the soldiers to keep a lookout for the approaching enemy – the Mongol horsemen. The advanced construction, utilising welded together boulders and stones, was employed in a very few parts of the Wall (for example, around Beijing – the capital of the empire). Until now, one can see the restored sections of the Wall reaching almost 8 meters in height, with pathways as wide as 5 meters. The vast majority of the fortifications, however, was created with the beaten earth and clay, strengthened with tree branches and surrounded by moats.

Modern times find the Great Wall of China mostly damaged. Both, natural and human-made factors contribute to its decay: heavy rains washing off beaten earth, erosional winds, plucking stones by visitors for souvenirs, graffiti paintings, etc. Only the most touristic places, near the major cities, are being renovated and fall under an architectural supervision.

The Jiankou section lies just over 70km north of Beijing. This, dated back to the 14th century part, was not being renovated since the time of its creation. Although it enjoys a reputation of being a quite dangerous section, due to its eroding walls, it is also one of the most photogenic sites. Located on the border of the mountain range, surrounded by steep, but picturesque cliffs and covered with stretches of dense, lush green forests.

One of the most popular parts of the Jiankou section is so called Sky Stairs. It is a steep and very narrow stretch ascending at a sharp angle of 70-80 degrees. Another, a bit less dangerous section, is the Beijing Knot. The meeting point of three parts of the Wall running from different directions.
The following information relates to the area of Beijing.

Even on the restored and easily accessible sections of the Wall, we recommend wearing comfortable sports shoes. On the semi-difficult and difficult ones, the trekking shoes with an excellent grip are a necessity.

Clothing – depending on the season.

Regardless of the weather, you need to carry with you water supply enough to cover a day-long excursion. Fluids can be replenished on the trekking path in small makeshift shops or stalls. It should be remembered, however, that the “wild” section has just a few or none of them.

Another thing worth noting and remembering is the lack of any facilities (i.e. toilets) on the wild sections. The only option – the nature.

Taking under consideration a drive from Beijing to the part of the wall you wish to visit, the whole Great Wall of China trip will take at least one day. Some travel agencies also offer to spend the night at the Wall, like in our case the Snap Adventures did. Unfortunately, the said company has already closed its operations, but the number of travel agencies that organise trips to the Great Wall is impressive, and there is a lot of them to choose from. Some, even offer multi-day highly customised treks.

The most popular and best-preserved sections of the wall are located around Beijing.

The best seasons to visit the Great Wall are late spring and early autumn. They help to avoid both: extreme summer and winter temperatures, as well as the tourist crowds. Autumn also brings cleaner air without smog, thus excellent visibility and unique colours of woods preparing for the winter. Spring, however, brings a lovely view of the awakening nature.

Depending on the route and travel agencies. Typically prices range from 90USD (half a day) to hundreds for a few days customised trek.

The Lion Dance - dancing into the Lunar New Year

On a hill covered by a green carpet of grassland, stand white walls of the Orthodox cathedral. Metallic sounds of a...