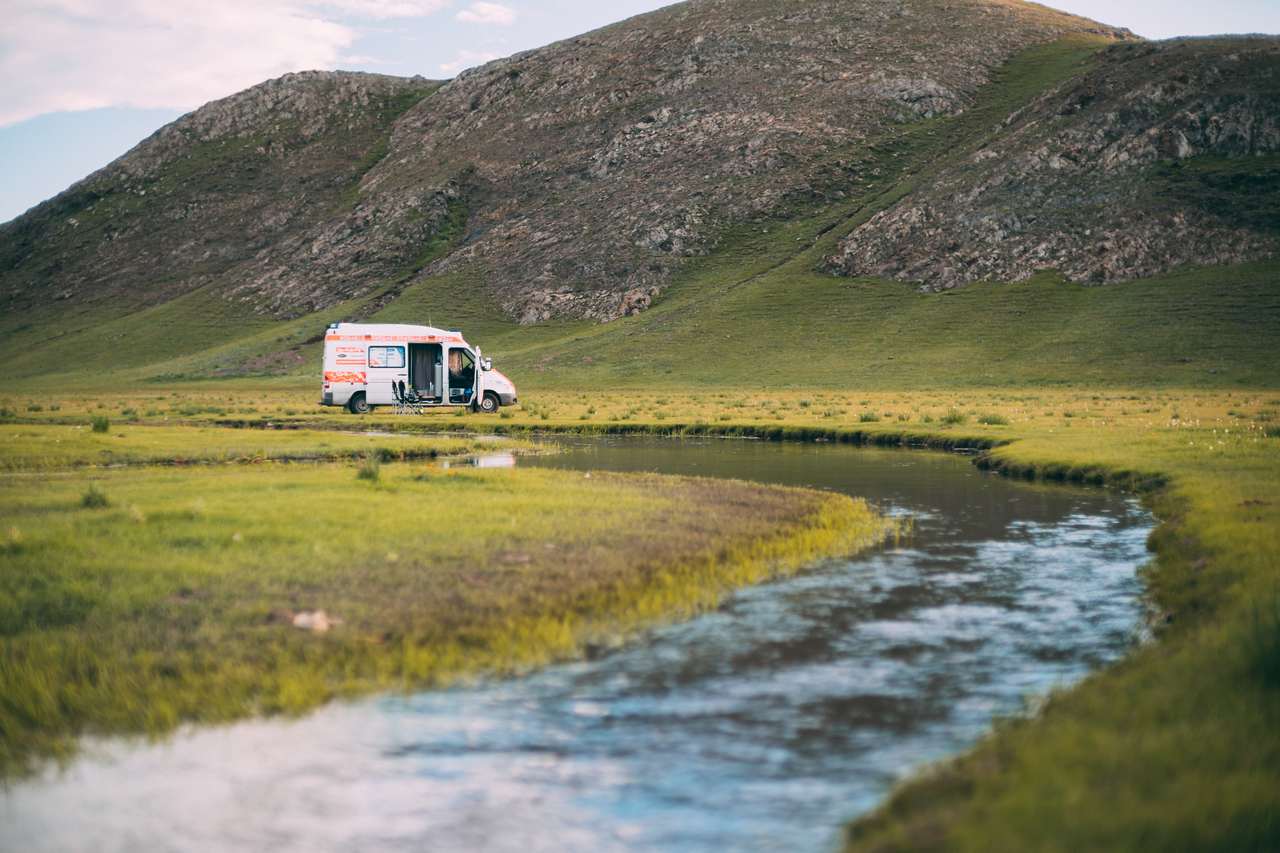 We are waiting in the queue for tickets to the Buddhist temple of Erdene Zuu. Among the number of locals, we are one of the few foreigners.

It automatically makes us the subject of semi-camouflaged glancing, pointing fingers and whispers ended with giggles. Suddenly, one of the co-queuers gathers up all his courage and tries to communicate with us in Mongolian. Seeing our puzzled expressions, he shoves his phone in our faces, which helps us to conclude that he wants to take a photo with us. The others watch in suspense. Will the foreigners agree, or will they not? Giggles die off. Whispers end half-way. Of course, we take a selfie with the man whose courage in asking is probably proportional to the percentage of alcohol in his blood. A few minutes later, when everyone in the radius of half a kilometre has our likeness on their smartphones, we enter the courtyard of what is left of the Erdene Zuu complex.

The place was founded in 1585 when Buddhism was recognised as the state religion of Mongolia. Once the complex consisted of sixty temples and housed almost a thousand resident monks. But this splendour could not withstand the clash with wars, plunder and politics. In the 1930s, as part of religious purges, the Communists razed the site, leaving only three existing buildings. Interestingly enough, it was Stalin, who save them. Using the example of temples, he wanted to show foreign neighbours that communism permits religious freedom.

Massive buildings of the whitewashed brick bend under beautiful, multi-level roofs finished with green ceramics. Their interior shines with gold statues of Buddha and Buddhist deities. On both sides of the main gate stand much smaller, but equally richly decorated buildings. Prayer drums almost entirely occupy their centre. A crowd of people fills up all that is left of the free space. They immerse in prayers. When the lips move silently, the hands turn the massive drums clockwise, combining the body and spirit in holy meditation.

After visiting the main complex, we walk towards a far end of the square and a wooden, inconspicuous gate. We enter a grassy yard crossed with lines of gravel paths. At the top of the yard, stands a white house. Although old, it pleases eyes with golden ornaments and intricately carved decorations. A smiling face of a monk dressed in maroon robes leans out of the door. Today, only a handful of them resides here. They are the last ones who try to restore the religious significance of the historical place.

The temple buildings stand just next to the walls of Karakorum, or rather what is left of the former capital of the Mongol Empire. In 1235, Ögedei – the third son of the great Genghis Khan – transformed a small settlement of gers, which he found here into a great, cosmopolitan city. The church, mosques, a Buddhist temple and pagan shrines coexist side by side. The Karakorum was a political and cultural headquarters. The most talented craftsmen lived here. It was them, who constructed the famous Silver Tree of Karakorum – a magnificent sculpture made of precious metals with silver fruits hanging from branches. Four golden snakes writhed around the trunk of a tree. When an automatic angel at the top of the sculpture put a silver trumpet to his mouth, the best liquors of the world flowed down the tree from the mouths of reptiles — all of it to please Ögedei and his guests. The Karakorum was the pride of Mongolia for 25 years until the new Khan moved the capital to Khanbaliq – today’s Beijing.

Today, only a large green filed between massive gated walls remains of the city splendour. Often our feet meet a stone outline of a building, a few baked bricks arranged in a geometric shape. Maybe someone lived here? Did he beat the red-hot metal, forming it into an ornament or a sword? Perhaps he prayed to his gods, asking to fulfil his most secret dreams? It’s hard not to give in to melancholy, knowing what used to be guarded by whitewashed fortifications.

After a prolonged stroll through the ancient capital, we hit the road once more.

The road from the Karakorum to Arvaikheer has a promising start. We drive happily on a beautiful, smooth asphalt winding among an endless lush green steppe.

Twenty kilometres further, the asphalt of the main road turns into a strip of beaten, sun-scorched sand. Gradually, even this path begins to fade. In the end, only two strips of car tracks imprinted in the grass wind in front of us.

The flat steppes begin to rise into gentle hills. Grassy fields cover them like a fluffy rug. On the horizon, the endless blue of the sky hugs the green space underneath.

Time and again, a woollen traffic jam blocks our way. Bellyaching and bleating herds of sheep run away from under our wheels. Their panicked escape is ridiculously overdramatic in the face of our snail’s pace.

The initial two strips of car tracks, now multiply into chaotic threads running in all directions. We play around following some of them to change the course at the last minute. Sometimes we set our path, like explorers, leaving our mark on the Mongolian steppe.

Suddenly, silver streaks start to shimmer in front of us. Greedily we go in their direction, only to end up in a muddy swamp hidden in the grass. Behind it, runs a rapid silver river, which we somehow have to cross.

We reverse and drive upstream, where we find more swamp. After changing direction and going downstream, we face the same.

Driving up and down the river changes our pleasant journey into pure frustration and us into a pair of snarling cats.
“Slow down! The whole car is shaking!!!”
“So what do you expect me to do?!? Push it!”
“Stop! There is a ditch!!!”
“I know! I can see it! Do you want to drive if you are such an expert?!?”
Time and again, we leave the car to explore subsequent parts of the stream and its shore. Each time we return more and more furious.

Our last resort is a narrow isthmus of the brook, hidden in the shadow of a hill. The shore is smooth and dry. But the river here is too deep.

“We will never leave this place!”
“Stop being such a hysteric!”
“I told you not to…”

We stop in midsentence and look hypnotised as the setting sun turns our silver enemy into liquid fire. The hill, illuminated by sun rays, comes out of the shadows and reveals to us the intricate embroidery of wildflowers. Cows from the nearby, almost invisible gers start to gather around, casting suspicious looks at the new specimens at their waterhole.

“Get the chairs and the table. We are staying for the night.”

We stay for three. Also, we finally manage to cross the river in a true rally style.

Under the dressing of the golden steppe

Almost a week has passed since we set our camp in Bayankhongor. Each day here brings new surprising events and most...