The Lion Dance – dancing into the Lunar New Year 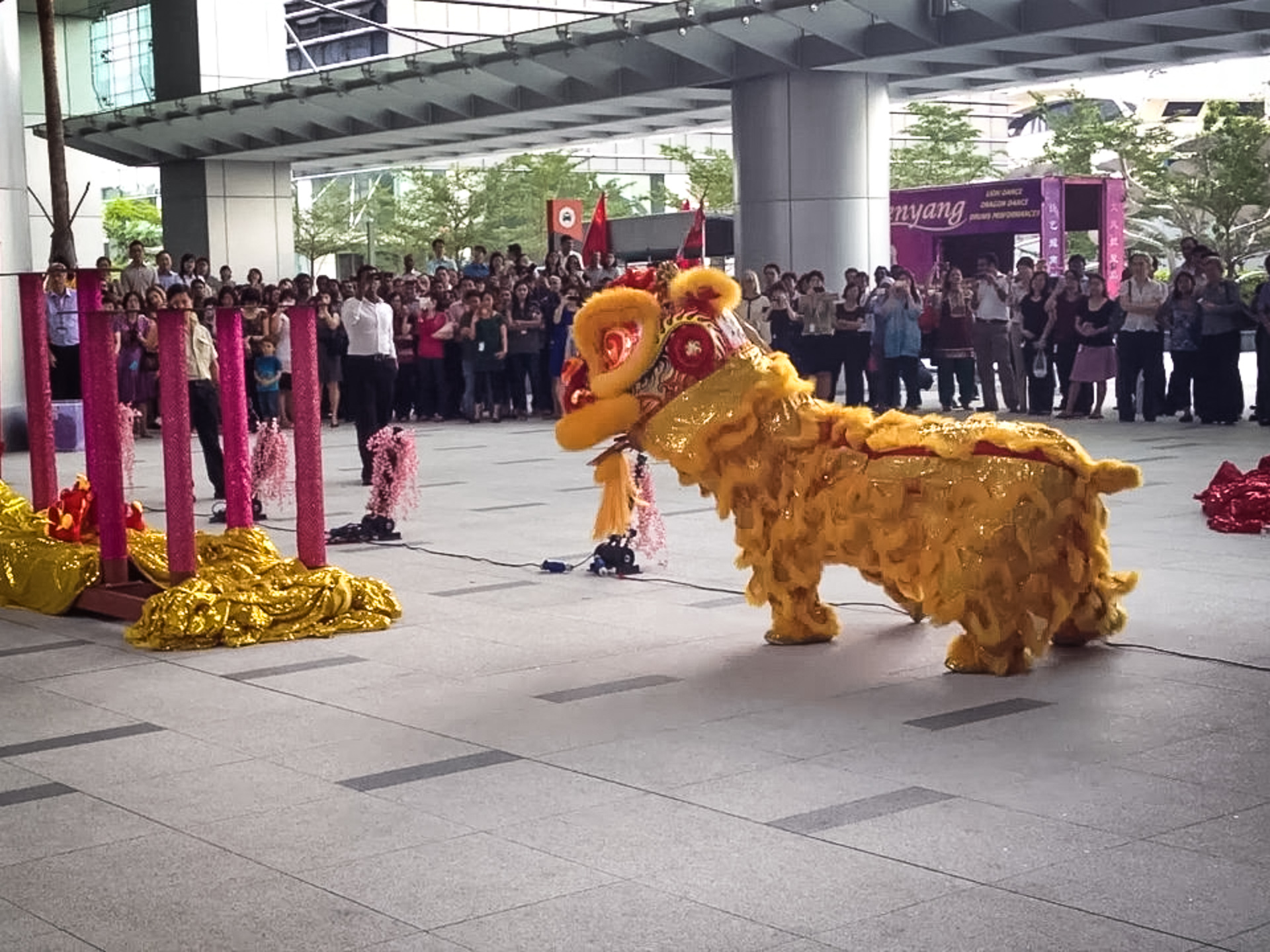 “Where are the oranges?! Faster, faster! I can already hear them! They entered the office!” a nervous commotion is going on between desks filled with laptops.

“You got them? OK, great. Put them here, high on the partition. Otherwise, he won’t see it and won’t peel.” the last instructions on the strategic location of the fruits issued. Just in time. Here, in a deafening accompaniment of drums and cymbals appears the lion.

Its massive plush-silk head floats above the office desks. Long eyelashes shade big, glossy with varnish eyes. The beast carefully watches anyone who lures it with a red envelope. Shimmering with gold and red sequins torso twists and jumps to the sounds played by following the lion musicians. The beast walks over from desk to desk, ensuring their owner’s happiness and prosperity in the New Year.

The center aisle turns into a stage, where – among the WOWs! and OHs! – the lion gives a spectacular show of acrobatic tricks and jumps. Unexpectedly, he starts a neck-breaking pursuit, between the office desks, chasing after hands waving with ang pao. Suddenly, the beast stops motionless. An orange, located on the top of the partition disappears in the depths of the lion’s muzzle.

“Yes! Here it is! He spat the lucky number! 1811!” carefully arranged into a row of cyphers pieces of orange, vividly cut from the whites of a plate. At the lunch break, the office will desolate. The local lottery joints, however, will be full.

Traditions of the Lunar New Year – the Lion Dance

The Lion Dance is a traditional form of Chinese dance with acrobatic elements. It is performed by a pair of dancers (usually males) who are dressed up as a lion. When one of them operates the giant head of the beast, the second acts as the body and is responsible for the proper functioning of the tail. The massive head of the animal is usually made of papier-mache and richly decorated with sequins, pieces of dyed material, and down. A sheet of fabric, decorated in the same style as the head, makes the body of the lion. The most outstanding are the eyes of the beast: huge, shiny and framed with long feather eyelashes.

Dancing is an indispensable part of the celebration of the Chinese New Year and other Chinese religious and cultural celebrations. It can also be presented during the significant business events and family celebrations (weddings). The primary purpose of the dance is to deter evil spirits and to ensure the well-being, happiness and prosperity to the household or institutions. The lion is invariably accompanied by a group of musicians with drums and cymbals. The noises they make using instruments, very effectively help to chase away any impure forces.

The Chinese mascot, despite its name, does not remind the king of animals. The explanation can be found in a legend, according to which a certain monk dreamed a nightmare. All humanity was beset with terrible sorrows, misfortunes and failures. A monk in prayer asked the deities how to prevent calamities. The gods responded, that only the lion can ward off disasters. The monk has never seen a lion before; however, he knew that it is the king of all animals. Bearing that in mind, he combined all the finest animals, he knew, their magical properties and in this way, he created a lion, which protected humanity from the misery.

The most anticipated part of the lion’s visit is the demonstration of its acrobatic skills. The choreography of such varies depending on the place and the space available. In the office, between the desks and lockers, it usually comes down to the vertical jumps when the head-dancer jumps on the shoulders of the torso-dancer. If the show is organised in an open space, the choreography is way more complicated and involved neck-breaking stunts on the tall stilts.

An equally awaited part of the lion’s performance is a ‘spitting out the lucky number’. To do so, the beast uses oranges which he receives during the visit. Fruits disappear into the lion’s mouth, and after a while, they are ‘spat out’ – already peeled and divided into parts. Orange pieces are arranged in a set of numbers. The number given by the lion is considered to be a lucky one and often is used in the lottery joints.

For a very busy day, bringing happiness and deterring failures, the lion and its troupe is rewarded with money traditionally placed in the red envelopes (ang pao).

The duration of the Chinese New Year celebration – between mid-January and mid-February.

Traditions of the Chinese New Year – the Reunion Dinner

7 pm sharp. Holding a basket overflowing with oranges – symbols of prosperity and good luck – we knock at the...

PHOTO ESSAY The New Star Hair Dressing Saloon facade is quite inconspicuous. The glass door screams with the yellow...