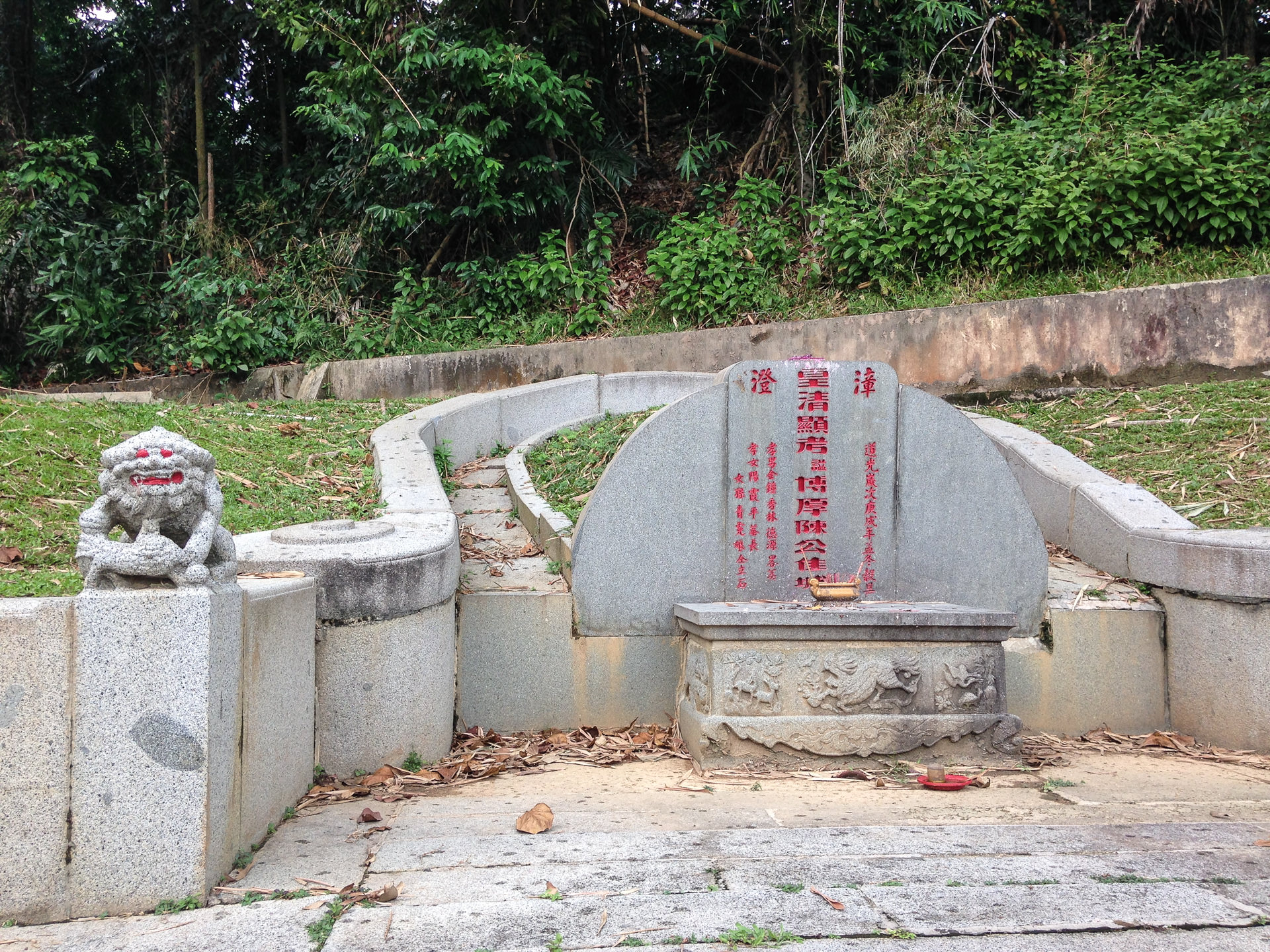 Mouthwatering scents coming from opened kitchen windows fill the air. A huge painted peacock and goatling peek from the murals. In one of the side streets – a scene from life of Singapore. It’s hard to say whether it is past or present. Reading the future, eating lunch at the hawker centre and petting nuzzling tomcat is timeless here.

Strolling between the walls, either colourfully vibrant or snow-white shiny, we reach a hill where our destination should be.

Through a narrow path, almost entirely overgrown by a mini-jungle we reach the stairs and climb to the top of a green hill. A panoramic view from here takes our breath away. It perfectly sums up Singapore – old, screaming with colours shop houses against the background of modern, glass-and-steel skyscrapers. Yesterday and today – side by side, a wall in a wall. Apart from the stunning view, however, there is nothing here.

An accidentally met passerby explains that no, it is not here. That we turned too early. That we have to go back to the stairs and the overgrown path. And then walk some more, along the main road.

A few meters further there is a church, a bus stop, and another hill. Its summit is crowned by the remains of the stone structure. Dense jungle, stemmed by a human hand, tirelessly tries to take over the place. Green tentacles stretch toward the stone lions guarding a low, extensive tomb. Its crumbling walls suggest that it was once part of an impressive building. Now it borders with a jungle – a tropical and an urban one. A stone testimony of the transience of human destiny, in the green embrace of invariably lasting nature.

Tombs of Tan Tock Seng, Chua Seah Neo, and Wuing Neo – Tan Tock Seng was one of the pioneers settling in Singapore, shortly after an arrival of the English. In 1819, this agile 19-year-old arrived from Malacca and selling fruit and vegetables quickly made enough money to open a store on the Boat Quay. In the blink of an eye, he learned English, what helped him doing business with colonizers and western buyers. Greatly operating shop and land trading brought him a fortune, which he continued to invest further. Among the Chinese community, he was known not only for its fantastic business sense but most of all for his skills in settling disputes and quarrels. This ability has been recognized also by the British, who named him the first Asian Justice of Peace in Singapore.

Philanthropic nature of Tan Tock Seng reflected in a huge donation of $7,000, contributed towards the construction of a local hospital. He died in 1850. His original resting place was known only to the family. The land on which it resting place is now has been bought by his son in 1877 for the purpose of burial of his wife (Chua Seah Neo) and the daughter in law (Wuing Neo). The transfer of his father remains to the family grave was only a natural move. Singapore growing traffic and lack of space for its proper management seriously threatened tombs in 1969. However, effective action of Tan Tock’s descendants prevented the exhumation and destruction of graves.

While the place is worth visiting, it is kind of an “in addition to” visit. Exploring tombs area will take up to 30 minutes, and it is already with taking into account the photos taking. However cruel it sounds, it is not worth to organize the whole trip only around the Singapore’s pioneer grave. It is a great addition to exploring Tiong Bahru district, though.

It takes about 10 minutes by foot to reach it from the Tiong Bahru Market and Food Centre. You should go to the end Seng Poh Road, heading towards Outram Road. At Outram Rd it is the best to locate the Jubilee Church, and having it in front walk about 100 meters further to the left. There will be a bus stop and a small hill behind it. To get to the top of the hill you need to go a little farther until on the right-hand side you see a side street with the stairs leading to the tombs.

No time limits. It is not recommended to wander around the area after the dark, as simply you will not be able to see anything.

Malacca - from a mouse deer to the UNESCO World Heritage Site

In a spacious restaurant, a family is looking for a shelter from the rain. Thousands of knick-knacks cover each...

How to order coffee in Singapore kopitiam

It is still early. Too early for the crowds gathered tightly around all available tables. It is too early to...