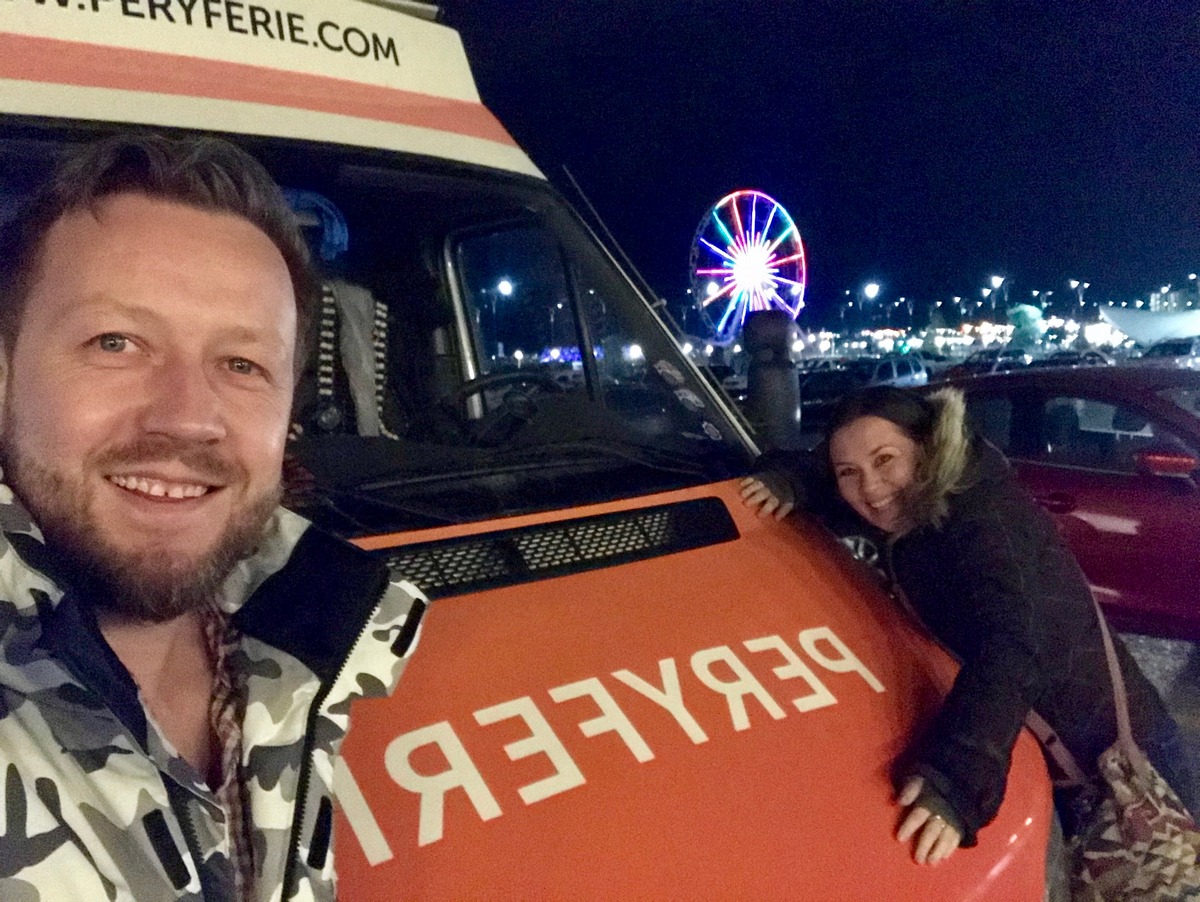 Only late at night, we manage to leave the Russia-Azerbaijan border crossing. We still have to drive a few dozen kilometres to reach the country’s capital – Baku.

Roads are lacking any street lamps, but the roadworks are plenty. In the darkness, in the maze of roadworks, we manage to lose our way several times. We get to the city frustrated and tired. Even its fantastic light-up is not able to impress us.

The next day doesn’t promise to be any better. We run from place to place, arranging the documents needed to apply for a Pakistani visa. We must send documents and passports to a tourist agency in Poland. Only this way we can get a visa, without a personal appearance at the Pakistani embassy in Warsaw. Our Azeri visa expires in 30 days. The whole application process for the Pakistani visa – including the delivery time – takes 26 days. If everything goes well, but with Christmas, on the way, it could be longer. We push our luck, but there is no other way.

Finally, when the valuable cargo is already sent as a quadruple-protected, registered and insured letter, stress-free we can give in to the charm of the city.

Every tourist who has been in Azerbaijan for more than two weeks must register in the electronic system of the immigration department. For this, you need a temporary residence address. To get one, we book a few days in the hostel and leave our registration matter to the staff. Ourselves, we set off to explore Baku.

We stroll between sandy-coloured, elegant buildings. The influence of Gothic and Baroque styles is visible in their architecture. The dens greenery of trees draws fantastic shadow paintings on the beautifully decorated buildings’ facades. It fills us with pride that the Polish contributed actively to the city’s aesthetics, which Italy or France would not be ashamed of. Four of our countrymen were successively the chief architects of Baku: Józef Goslawski, Kazimierz Skorewicz, Jozef Ploszko and Konstanty Borysoglebski. Their buildings adorn the city to this day. In casual conversations, the Bakians themselves are proud to report on Polish influences on the city’s architecture.

However, the Polish presence in Baku was not only marked by architecture. Some fellow citizen came here as political exiles, some because of the oil boom at the turn of the twentieth century. Many Polish scholars and engineers moved to Baku, linking their professional development with the rapid growth of the city. Among them were engineers Witold Zglenicki and Pawel Potocki. The former was the author of an innovative – on a global scale – the idea of oil extraction from the seafloor. Potocki, on the other hand, became famous for draining the Bibi-Eibat Bay. According to his concept, almost 80 hectares of sand poured into the bay to create the above-ground oil field. Józef Jesman was the creator of oil hydraulics and one of the designers of the Baku-Batumi oil pipeline. The engineer Stefan Skrzywan worked on the construction of waterworks, which significantly contributed to averting the epidemic of cholera and malaria that plagued Baku at the turn of the twentieth century.

The effects of gold-bearing oil fields can be seen everywhere in the city. Baku continues to grow. Hand in hand with historical architecture stand modern buildings of abstract designs, shining with glass and metal. At night, their surface turns into giant projection screens. The bay is closely watched by the huge ‘Eye of Baku’ – a massive Ferris wheel. Next to it, the sophisticated lotus flower of a modern shopping centre blooms. Just a few steps away stands – or I should rather say – lies, a building in the form of a rolled carpet richly decorated with gold ornaments – the Carpet Museum. Investments in Baku flow like a rapid river. Tourists, new clients and new investments follow.

We have to admit; Baku’s modern splendour impresses us. However, instead of glass, metal and golden ornaments, we prefer thick fortified walls and narrow, cobbled streets of the historic Inner City – Icheri Sheher. Its history dates back to at least the 12th century. Around this time, the construction of the Maiden’s Tower was completed – the most recognizable symbol not only of Baku but of whole Azerbaijan. The tower’s history, purpose, circumstances and exact date of creation still give historians a headache. Some of the oldest parts of the tower date back as far as the 4th century, while others are hundreds of years newer. Some historians claim that the structure was erected as a Pre-Muslim Zoroastrian temple and hence the eternally burning fire at its top – the symbol of Zoroastrians. Others, however, believe that the tower was simply an astronomical observatory and had nothing to do with religion. Legends and folk tales around the Maiden’s Tower are alike confused. Those referring to sources of Zoroastrianism claim that Baku was invaded by a king who wanted to make Bakians his slaves. Zoroastrian priests locked themselves in the tower and prayed for rescue. God Ahura Mazda heard their plea and in response senton Earth a beautiful virgin with flaming hair. The woman defeated the evil king, who captivated by the courage and beauty of the virgin, married her, sealing the peaceful existence of Baku. Other legends, unfortunately, have no happy endings. According to them, the daughter of the king did not want to marry a prince chosen for her. To buy herself some time, she asked her father to build a tower for her. When the building was completed, the desperate girl threw herself from its top. All romantic and historical confusions around the Maiden’s Tower only add to its sentimental value. Even to such an extent that its image appears on banknotes, coins and official letterheads.

As we cross the threshold of the Inner City, we move back in time. Our feet slide on cobblestones, polished by millions of footsteps. We get lost between the thick, stone walls of houses, which massive gates open to shaded patios. Wooden balconies hang above our heads. Everywhere we look, cats bask in the rays of December sun. They took over all of Icheri Sheher. They stroll lazily along its streets, holding their heads high. A mischievous spark shines in emerald eyes. They thoughtfully and carefully choose slaves who will not only pet and scratch them behind the ear, but who will also be in the seventh heaven that they have received the gracious permission to do so. Everyone falls victim to Baku cats. A man with a briefcase hurrying to the office suddenly deviates from the route, enters the store and leaves with an armful of cat food. The suit of an elegant lady, who talks to the client over a coffee, is abundantly decorated with cat hair when the feline jumps unceremoniously on her laps. It does not surprise either the woman or the client, who soon also becomes a cat recliner. Even cleaners in Icheri Sheher work for Baku cats. Every morning they clean houses specially created for them. Each morning they fill cats’ bowls with food and water. Baku felines have no owners. However, you cannot call stray nor homeless animals, on whose services the whole city is.

Strolling through the old town and meetings with the Baku cats become our daily routine. We start to feel at home here. An impromptu invitation from the Polish community for a Christmas Eve dinner magnifies this feeling even more. Soon after, we leave Baku and set off on a trip around Azerbaijan.

With new tyres and in the fixed homebulance we reach Irkutsk. In the capital of eastern Siberia, we spent only a...

The first longer journey outside Baku takes us through the rusty steppes. Rather than the vegetation, they are full...