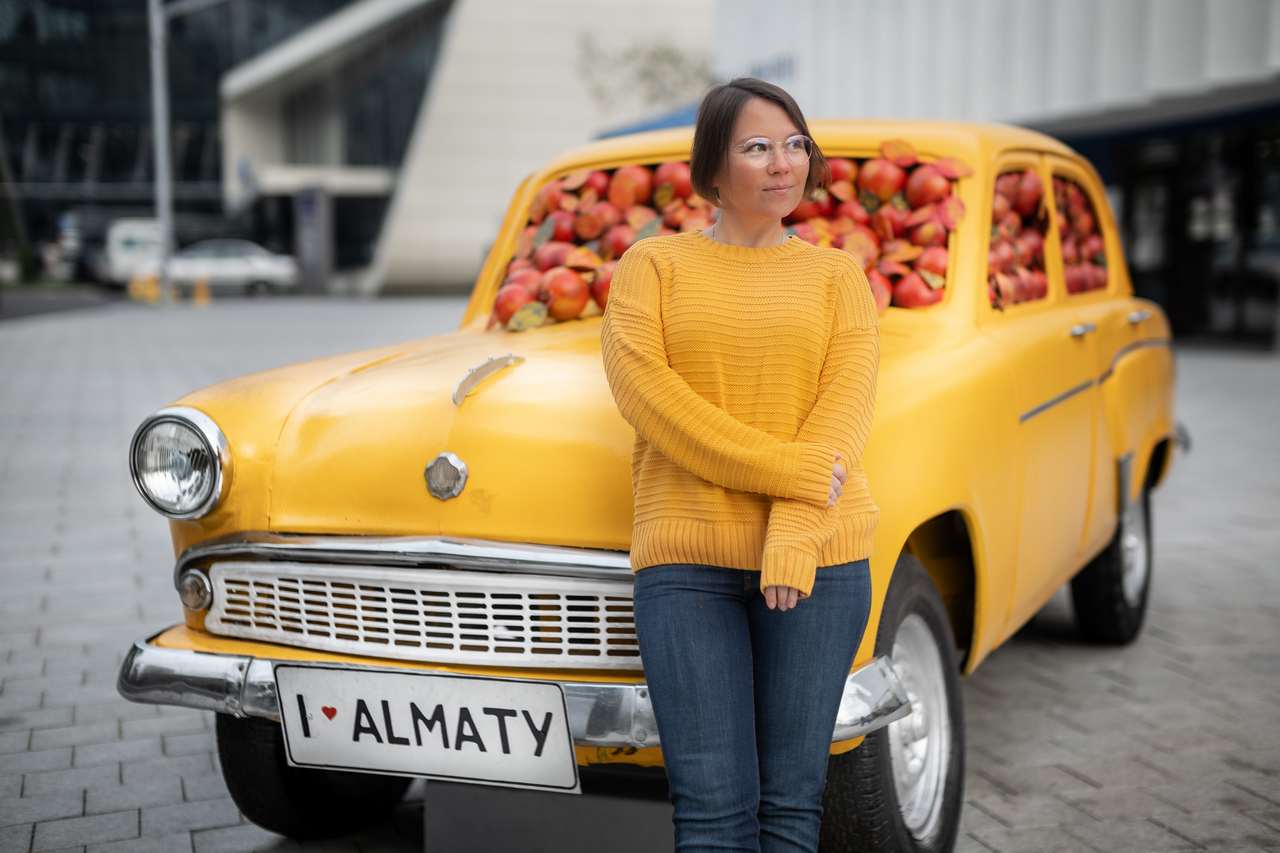 We almost give up on Astana (renamed to Nur-Sultan in March 2019). The capital of Kazakhstan, which we reach at night, does not impress us at all.

The day brings the sight of grey, large-slab blocks of flats, dilapidated and dull post-Soviet buildings, collapsing pavements. And then we cross the bridge connecting north and south, and the city gives us a sobering slap.

It holds all the vigour and youth of the city, which only twenty-two years ago began to prepare for its new role – the role of the capital. Astana – formerly Akmola – was created 190 years ago from virtually nothing. From the dust of surrounding endless steppe. The city laboriously raised itself to the status of a metropolis, a financial and cultural cradle. It gained the status of the Kazakhstan icon.

With eyes wide open, we circle the glass pyramid of the Palace of Peace and Reconciliation, the Bayterek Tower and the National Museum of the Republic of Kazakhstan, sterile blue block against the evening sky. Strolling through the giant Independence Square, we give in to the splendour of Astana. It is just this nagging feeling we have at the back of our heads. Something is not as it should be — an elusive impression which does not quite allow you to immerse in the city grandeur fully.

“The something” becomes apparent when we reach Almaty. Astana lacked an invisible ethereal blend of history and modernity, which is only achieved with the passing time. It yet has to develop the soul and spirit that Almaty emanate at first sight.

The giants of the Tien Shan mountains embrace the former capital of Kazakhstan. Highways running through the city lead straight into their snowy arms. The city centre is a lax existence of history and modernity. Astana is divided by a sharp cut into two parts – new and old. In Almaty, one can see and feel the slow, naturally evolving mix of both.

Apples are gazing at us from every corner of the city: brass and heavy or plastic and light, shimmering with rusty metal or shiny varnish. Small, large, giant and tiny apples. Apples, which the city was named after – alma ata – “father of apples”. The older generation of Almaty residents is still able to point places around the city, where until now the truly wild apple trees grow. The untamed ancestors of our domesticated fruit.

In Almaty, we camp at the hostel parking and use the luxury of spacious showers of the said lodging as well as its electricity and Internet. Sunny October days lure us out for long walks around the city. Cold evenings rush us back to the warm homebulance.

And then the snow falls and brings a freezing temperature. Our homebulance does not like it at all. It rebels and doesn’t want to start. When we wrestle with it using autostart and other mechanical miracles, a car pulls up to the hostel parking lot. The car passengers chat with us full of compassion, suggest what to do and cheer all our efforts. Finally, encouraged by a kind word and autostart, the car fires up. The joy overwhelms everyone, including out new friends who suddenly ask us for an interview. It turns out they are Kazakh TV reporters who make programs promoting tourism in Kazakhstan.

A moment later, we stand next to the homebulance, telling a charming lady with beautiful pink hair, what we like in their country, what we would improve, and what adventures we already had. The operator looks into our homebulance with a glassy eye of the camera and asks if we could raise the hood and re-play the scene of the car repair. The things we do for fame!

A few hours later, we say goodbye to the crew and head towards Kyrgyzstan. Just a dozen or so kilometres after Almaty:
“I told you there’s a forty-speed limit!”
“I will not drive at forty for two hundred kilometres, woman!”
“Then, you’ll pay a ticket again.”
“Not a ticket. A bribe.”
“Whatever! It is already the second today! We will go bankrupt in this country.”

While we are busy screaming at each other, Kazakh policemen richer by the equivalent of twenty dollars drive off, joyfully flashing blue signals.

There are almost three hundred kilometres to the border with Kyrgyzstan. The road we drive on is a blessing and a curse at the same time. Smooth, wide, beautiful, but spiked with speed limit signs like a rosebush with thorns.

Limitations do not make any sense. They drag along road works that have long since ended. The road works are done. The signs remained. The bribers fell in abundance.

Some of the signs fallen victim to driver’s increased blood pressure. Some “forties” have sacrificed their lives and lie broken at the side of the road. Almost all “fifties” with a touch of black spray paint are turned into “nineties”. The quality of work leaves much to be desired, but in the end, the number counts.

At a snail’s pace, we pass other white-red circles with catastrophically low limits.

“No! I can’t! I can’t do this! It is torture!”, cries out Andrzej, close to a nervous breakdown.

But finally, there is a glimmer of hope on the horizon. There is a road sign stating the end of no longer existing road works!

The leg gets heavy on a gas pedal. The speedometer indicates the desired ninety km/h. A few kilometres further – a hill. Before the hill – a fifty-speed limit for the next two kilometers.

A roar comes from the driver’s seat:
“NOOOOOO!!!! The hell with it! I’m ignoring everything from now on!!”
The roar blends with the police siren. The third today.

After a while, we’re again driving at fifty, again lighter for over a dozen dollars. The policemen happily turn back, as another driver also decides to ignore the sign. A five-hundred-meter section makes them pay a monthly salary in a few hours.

A few kilometres after border crossing we can see a long line of cars on the roadside. The drivers leave, head towards the police car parked in the cold shadow of a tree and queue up to the passenger’s window.

Lost in thoughts, we are startled by a police officer appearing in front of us.

“Hello! How are we today?”, he asks merrily.
“Very well, thank you.”, baffled we answer in unison.
“That is great! Can mister driver kindly follow me, please?”, the policeman asks. ”There was a speed limit at the border, which mister driver ignored.”
Andrzej lines up to the passenger’s window of the police car – a mobile cash register.

Waiting in the car, I keep hearing: “Hello! How are we today?”. The sentence falls through open windows of the next vehicles.

When we finally obtain a visa to India, we leave Tehran. Before we cross the city border, however, we stop at the...

Russia-Mongolia border crossing. In the chaos, a mass of bodies waves their passports feverishly and presses us to...