The Shwedagon Pagoda – magnificent witness of the Buddhist novitiation 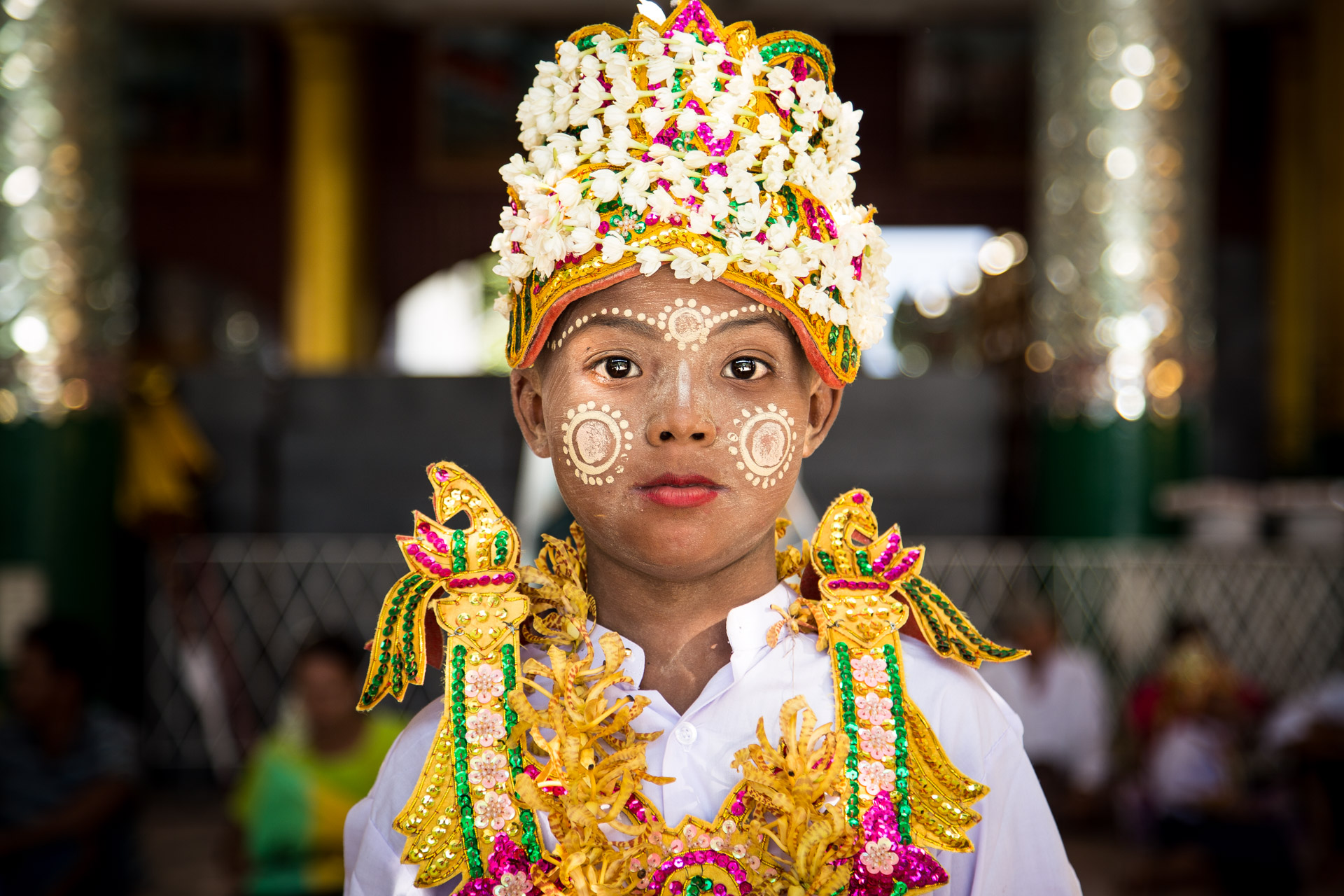 The Shwedagon Pagoda – an almost 100-meter high stupa that majestically rises on Singuttara Hill – has been reigning over Yangon for hundreds of years. It is believed that the “Crown of Myanmar” was created more than 2500 years ago, making it the oldest in the world. Covered with gold and jewels, it enshrines relics sacred for Buddhist, amongst others – eight strands of hair from Gautama Buddha’s head. The most important place of worship in Myanmar is also a pilgrimage destination of the faithful from all over the world.

First rays of a barely awake sun fall on two gigantic statues of leogryphs. Lion-like creatures guard each of the four entrances to the Shwedagon Pagoda. Between them, there is a massive gate with a roof ornamented with golden carvings. Behind it, stretches a long, spacious corridor. With its marble floor decorated with painted panels and massive columns, it looks more like a ballroom than a walkway to a temple.

The corridor opens to the main terrace of the pagoda, which resembles a small town. The ornamented roofs of smaller and larger temples and prayer rooms stretch to the horizon. Above them, majestically towers the main stupa – the golden jewel in the crown of the temple complex.

Soon, this breath-taking scenery becomes a stage to one of the most important events in the lives of young Buddhists. Surrounded by the family, they will be admitted to the Buddhist novitiate for the first time. Not older than eight or ten years boys are going to be respected monks. This time, only for a short while, just for a week.

Although it is early in the morning, the terrace is already alive with people. Shuffling with bare feet over the still cool floor, they move from the chapel to the chapel to pay their homage to the Great Teacher. Sitting or kneeling they are careful not to point their feet towards the statue and do not turn their backs on it, which would mean the greatest disrespect.

They come with all families. Several generations including seniors who are already looking for support of the younger arm. Young parents and their children with faces smudged with sun-screening thanaka paste and shaved heads – for the hair to grow stronger and for a cooling effect. Aunts, uncles, cousins. The big expedition to the most prominent place of worship is almost like a picnic with its tranquil, family atmosphere. Whoever wishes to pray, prays. Whoever wants to meditate, meditates. These, who prefer just to sit in the cool shade and soak up the beauty of the place, do exactly that. The atmosphere of the greatest respect and admiration is perceptible, but it does not feel uncomfortable. It does not overwhelm.

With every passing hour, it gets more and more crowded. When it seems that the temple terrace is unable to hold any more pilgrims, colourful pageants start to appear. At their front there are young boys, looking like princes from the fairytale kingdom. Their lips highlighted with red lipstick, eye contours and eyebrows blackened with a crayon, crown-like decoration of flowers and sequins adorns their heads.

Dressed in the best festive sarongs, prideful parents walk next to the boys. Mum carries a package with everything that a monk needs – an orange robe, an alms bowl, a razor, a fan and a piece of canvas for water filtering. Dad holds a golden umbrella over his son, shielding him from the sun. Next, in the line, beautiful young girls are carrying decorated ceremonial boxes and flowers. Other relatives are closing the procession.

The pageant circles around the main stupa of the pagoda in a clockwise direction. This course follows the direction of the sun and at the same time symbolises the four most important moments of Buddha’s life: east – birth, south – enlightenment, west – setting in motion the Dharma cycle, north – ultimate achievement of liberation from the suffering. Moreover, the clockwise movement causes the right hand – identified with righteousness – to be always turned towards the sacred object. Such positioning symbolises respect and reverence.

Occasionally someone breaks up from the procession and approaches the planetary post. At each of the posts, there is a statue of the Buddha, who is the patron of the person born on that day. Below the statuette of the deity, there is a figurine of an animal, symbolizing the individual’s character: Monday – tiger (smart, strong and patient) Wednesday morning – tusker (unpredictable and enthusiastic), Wednesday afternoon – elephant (introvert but with luck in business), Friday – guinea pig (creative, loving and sensitive), etc. Whoever visits the planetary post should draw water from the vessel at the Buddha statue and pour it over the figurine arm three times, chanting one’s request or prayer.

After the procession, the entire family surrounds the boys, who are about to enter the new stage of spiritual life. Taking pictures and posing with monks-to-be is endless. In a moment, the children will enter the monastery, where they will ask the abbot for admission to the order. The older monks will shave boys’ heads and will start to educate them about Buddha teachings. From then on, boys will have nothing in their possession. Like their older brothers, each morning they will gather alms. They will only eat two meals a day – the last one before noon. But above all, they will study the Buddha’s teachings and learn how to meditate. The whole processing is just a small substitute of what Prince Siddhartha had done hundreds of years ago when he rejected the worlds pleasures in search of spiritual enlightenment.

Accepting their son into the order is one of the greatest honours that can befall on parents. They will celebrate this event not only with family but also with friends and even neighbours. Parents of the boy will organise a great feast and invite anyone who wishes to share their joy with them. Cost does not count. If the poorer family is unable to arrange a lavish celebration, the richer relatives will help. Everyone involved in the preparation will treat it as a Buddhist duty – the opportunity to do good deeds that will result in positive karma and protection from one of the four hells. Blessing of the son turned monk flows to the parents and relatives.

With the advent of the evening, the pagoda terrace slowly desolates. Young monks are already behind the walls of the monastery. Colorful processions left the temple. And it is now when the Shwedagon Pagoda shows that it is a real gem of Myanmar. In the rays of the sunset reflecting in its golden walls, it begins to glow with the radiance of the burning ruby.

It is worth to start visiting The Shwedagon Pagoda early in the morning to avoid both: crowds of visitors and the heat pouring from the sky. Alternatively, you can visit the place in the afternoon when the heat subdues, however, the masses remain till at least the sunset.

As the Shwedagon is the greatest place of Buddhist worship, it must be duly respected. There is no way of entering with bare shoulders or knees. The rule applies to both: ladies and gentlemen. Also, keep in mind that the entry is only barefoot. For this very reason, it is again worthy consideration to do the morning visit, when the marble floor of the main terrace is still cool and does not mercilessly burn feet.

Dagon, Yangon,
Myanmar (Burma)
The Shwedagon Pagoda is Yangon’s most recognisable monument and getting there is not a problem. A taxi fare from the airport to the temple area will be about 11,000 MMK (kiat) / 8 USD.

PHOTO ESSAY The New Star Hair Dressing Saloon facade is quite inconspicuous. The glass door screams with the yellow...

“Two! Two dollars for a box of biscuits! Ten lollipops for fifty cents!”, a peddler from the stand at the alleys...