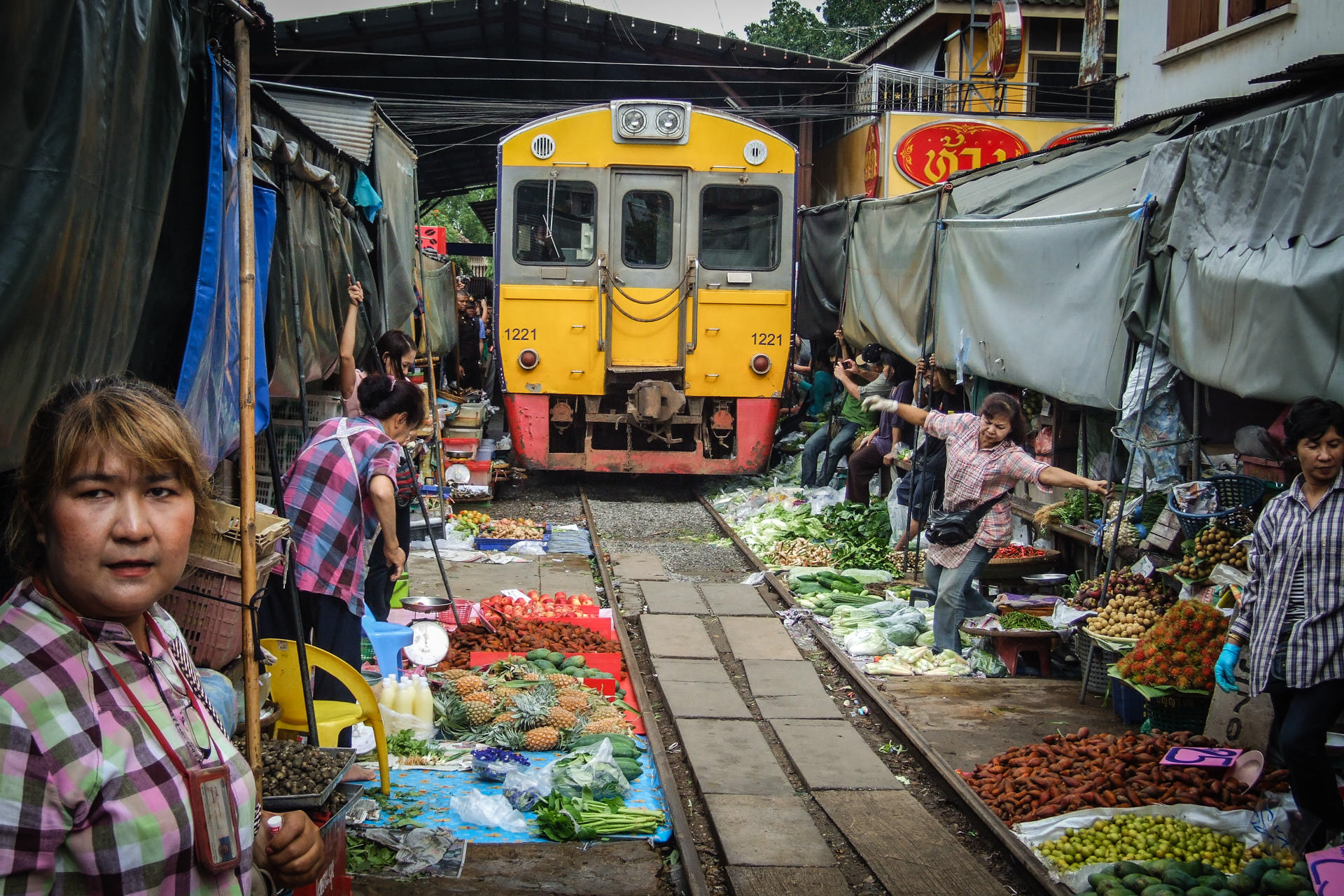 Sometimes, there is only a thin sheet of foil stretched directly on the ground.Meat stalls are much more hi-tech. A high table with an aluminium top and separate containers for ribs, offal and other parts seems to be the peak of technical achievement in comparison to the fruit and veggie neighbours.

Tradeswomen sit on plastic chairs squeezed between groceries. With their customary singing-like voice,
they persuade customers to buy their and only their products. When the negotiations are successful,
ladies quickly and efficiently load the goods into the purchaser’s linen bag. Under floral aprons, their
colourful blouses frantically flash in rainbow chaotic streaks. Just to be brought to a standstill and back
on a plastic chair minutes later, until the next transaction.

Suddenly, a sharp and loud whistle cuts through a typical market buzz. At this sign, with skills mastered
over the years, stall owners start to fold all awnings. In the blink of an eye, the canvas roof that existed
just seconds ago disappears. At the same time, trays with fruits and veggies pulled out from the alley
reveal a secret of the market – rail tracks running through its heart.

Just seconds after the last stall disappears from the metal railway strings, the train rolls in. Mere
centimetres separate its sides from faces of vendors and tourists with their cameras ready for action.
Those who want to take the best shot frantically jump forth and back across the tracks, giving
saleswomen heart attack and activating their choral warning lament. Almost as loud as a whistle of the
train siren itself, which also cautions persistent adrenaline rush seekers.

The slowing train stops several meters away at Maeklong Station and like a world-known celebrity poses
for photos with tourists.

The Maeklong area has long been known for a regional fishery. Fish markets were the primary source of
income for the local population. At the beginning of the twentieth century, the construction of a railroad
began. Its initial role was to bring the supply of seafood to other provinces, including Bangkok. Tracks
that run through the heart of the market not only did not discourage the sellers but brought them the
publicity and the masses of tourists wanting to experience this unusual spectacle. Because of that, the
market also gained its unofficial name: Talat Rom Hup – "market of pulled umbrellas". It refers to an
immediate folding of stall awnings and umbrellas while the train is passing.

The place is worth a visit, but not regarding shopping. The overwhelming number of stands offer
seafood that can be easily bought in Bangkok. Same with vegetables. What you can taste while waiting
for the main attraction are the fruits: rose apples, pomelos, durians or dragon fruits.

Be mentally prepared for crowds. Especially near the main entrance to the market. If you arrive early
enough, you can use this time to take a stroll along the tracks to less crowded parts of the market.

Consider Maeklong Railway Market visit a day trip. It is best to combine it with a visit to a nearby Dumnoen Saduak Floating Market.

Time-consuming but also the most authentic and full of fantastic views is a train trip. From Wong Wian
Wai Station in Bangkok take the train to Mahachai (about 1h), then transfer to the ferry that will take
you across the Tha Chin River (about 5 min.) and to Ban Laem Station. Here, again you must board the
train which will take you all the way to Maeklong station (about 1.5h).

The other option is a bus/minivan trip or a rented car – the whole journey will take about 1 – 1.5h
depending on the traffic around Bangkok.

It is worth taking a correction for any delay or early arrival, which also can happen. Typically, both
options are within a timeframe of approximately 15 minutes.

The fare for the entire train trip (including ferry) is about 20THB (Thai Baht) / 0.50USD.

A one-and- a-half- hour minibus trip from Bangkok to Maeklong – about 80THB / 2USD.

An organised private car trip to both: Maeklong and Damnoen Saduak markets is about 2000THB /
60USD (including boat hire in Damnoen Saduak).

The Shwedagon Pagoda – magnificent witness of the Buddhist novitiation

On a hill covered by a green carpet of grassland, stand white walls of the Orthodox cathedral. Metallic sounds of a...