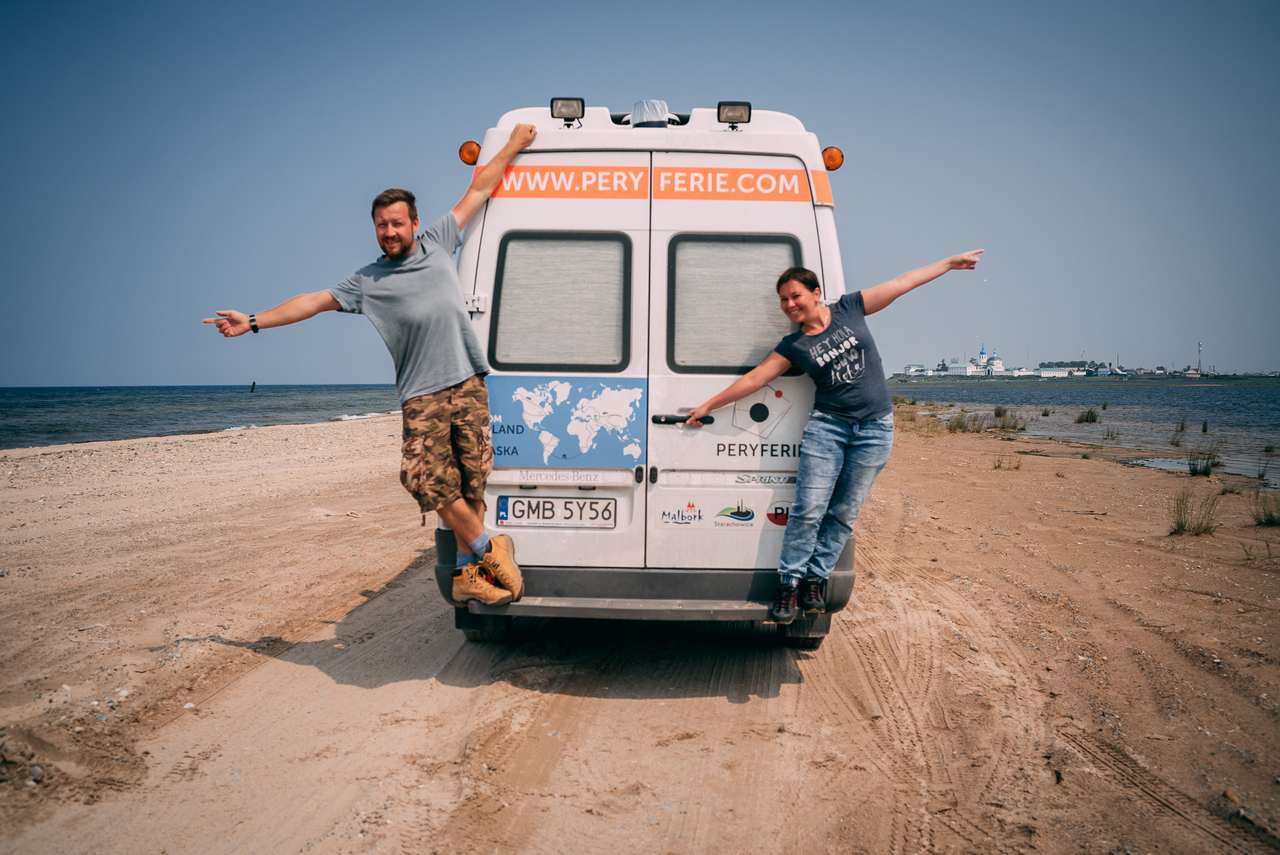 With new tyres and in the fixed homebulance we reach Irkutsk. In the capital of eastern Siberia, we spent only a short while, wandering around the city in search of traditional Buryat houses.

Wooden structures are famous for beautiful colourful shutters and intricately carved decorations around the windows. These elements are indispensable, even in the poorest and the oldest dwellings. The latter ones, unfortunately, start to deteriorate. Wooden houses were built without foundations, directly on the permafrost. When the frozen surface began to melt, the houses began to collapse. Some of them dangerously tilt to one side or sink into the ground up to the level of the window. A heart-breaking sight to look at.

After visiting Irkutsk, we finally set off towards the long-anticipated Lake Baikal. This inconceivable lake dates back to 30 million years. It contains more than 20% of the entire drinking water resource on earth – an amount enough to sustain a quarter of the world’s population. The deepest lake in the world (its deepest point is at 1642m) is home to thousands of species of plants and animals. Most of them are endemics – species unique only to a specific place. Their most famous representative is nerpa – the Baikal seal, one of the three existing species of freshwater seal. Lake Baikal also houses dozens of fish species – with the most famous omul, which reigns on the tables of the local fishermen.

We rush to the majestic Baikal as fast as the state of roads allows us. Sometimes the surface is as smooth as a table. Sometimes it changes into roadworks with bare, sharp stones ripping the surface. It is open to the traffic, however, at your own risk.

In spite of everything, we reach Lake Baikal which greets us with torrential rain and white walls of the Orthodox cathedral, standing on the nearby hill.

Many locals from the nearby villages come to this place of worship. They tell us, the cathedral was established on the spot where Mongolian bandits murdered Russian ambassadors. It was in 1650. The village took its name, Posolskoye, after the unfortunate ambassadors, or rather ‘posels’ – according to the original pronunciation.

The Orthodox Holy Transfiguration Monastery, from a small church commemorating the event, turned into a cathedral complex with a monastery and adjoining administrative buildings: a canteen, quarters for seven residing priests and guest rooms. There are also flower, vegetable and herb gardens scattered around the monastery yard. At the back of the place, flat on the ground lie stone slabs with inscriptions dating back to the 18th century. It is an old cemetery.

Buildings of this complex are neat but very modest compared to the splendidly decorated cathedrals in the large cities. At the same time, this neatness and modesty are the most magnificent ornaments of the cathedral complex. Peace, silence and Lake Baikal compliments ornaments.

A typical view on the lakeshore at sunset, is a figure in green overalls, long waders riding an antique motorcycle with a raft attached to it. Without lights, without any navigation other than the stars, the figure along with the raft slides into the water. After a while, one can hear only a quiet splash of wooden oars and the silhouette, together with the setting sun, disappears behind the horizon.

And when the sun comes back, together with the fisherman on the shore appear whole families of locals who freshen up in the Baikal waters. Entire generations – starting from a few year olds, to seniors of the family – splash in crystal-clear water.

Finally, on the shore appear the long-lashed meadow models – cows from the nearby pastures. One after another, they dip their pink tongues in the crystal-clear water of the oldest lake in the world. They are in a hurry. A herd of horses is heading towards them to take their place at the Baikal waterhole.

Behind Lake Baikal borders, extends an extraordinary land – Buryatia. It is an autonomous republic within the Russian Federation. Land as unusual as beautiful. The cottages that we were so tirelessly looking for in Irkutsk, here are a standard view. They look like intricate constructions made of matches and placed between green hills – as they were taken straight from the pages of Russian tales.

Between the villages, in the taiga forest, hide other wooden constructions – gazebos adorned with colourful sashes. There are no benches in these gazebos. There is only a table with money and food on it. These are gifts for the spirits residing in this holy place.

Buryats – descendants of the Mongols – practice the philosophy of life called Tengerism (Tengri – The Mighty Blue Sky), according to which the Sky is the supreme deity and created both worlds – visible and invisible. Spirits live in both worlds. They live everywhere: in animals, mountains, forests, rivers and people. These are called the soul. Practising Tengerism means to keep a balance between the spirits, that is why everything and everyone should be deeply respected – whether it is a living next-door neighbour, or a river flowing by, which out of respect cannot be polluted, or a forest that cannot be cut for the very same reason.

If this balance is disturbed, an intervention of the shaman – spiritual guide, chosen by the spirits – is required. The decision about the spirits’ choosing is manifested by a severe “shamanic disease” that falls on the chosen one or by a thunderbolt strike.

The historical-political and religious-cultural complexities did not overlook Buryatia. Under their influence, Tengerism has changed. It fell victim to other religions, life philosophies and politics. Communism almost exterminated it, as did Tibetan Buddhism. In spite of everything, Tengerism in Buryatia – albeit in a modified form – lives and holds better than ever. Its “gazebos for spirits” function together with the Buddhist stupas and domed Orthodox cathedrals.

It is hard to say goodbye to the breath-taking Buryatia. We leave this magical place with a heavy heart. But another magic awaits us – the magic of Mongolia.