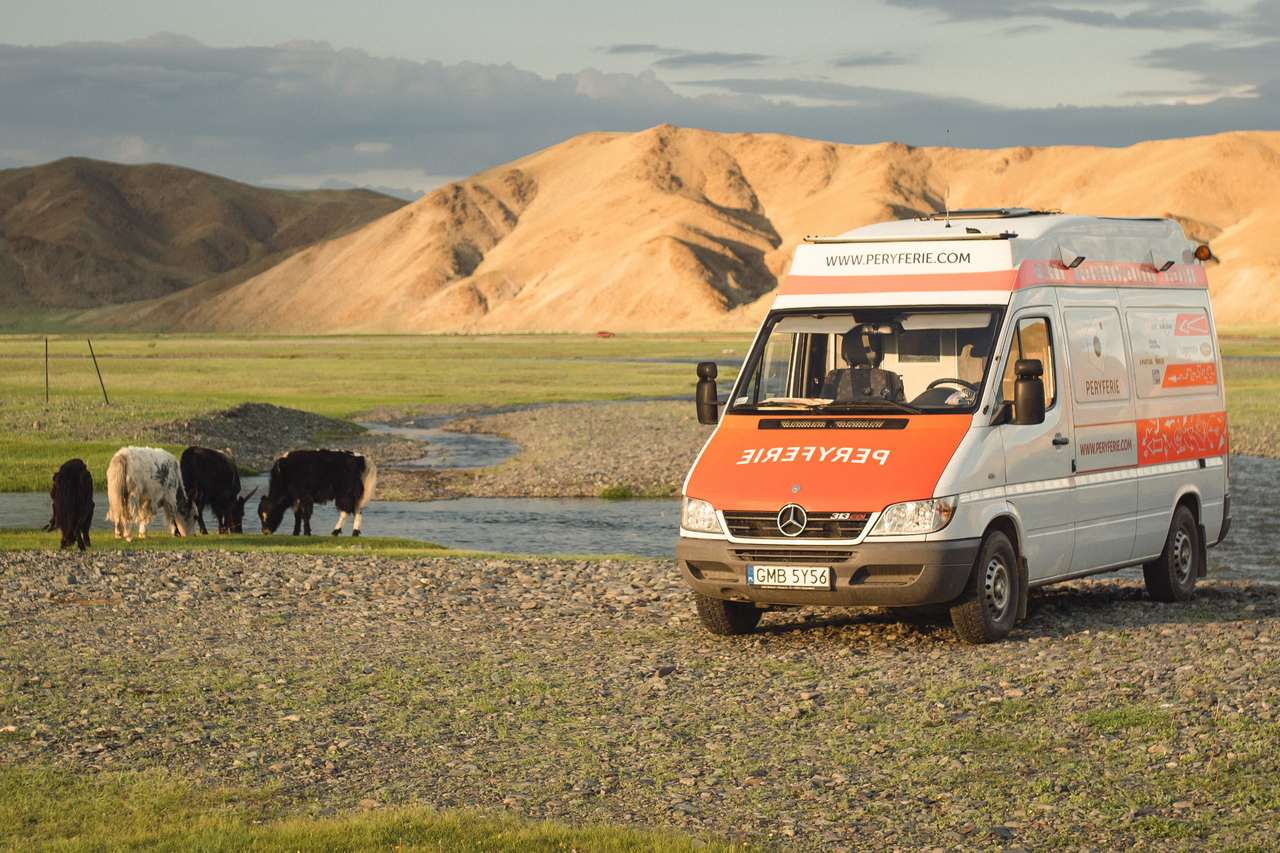 After a rally crossing over the river in the Khujirt Valley, we finally drive onto a ribbon of asphalt. Initially, its condition is so bad that we dream about returning on off-road paths. In time, however, the situation improves. We can finally enjoy what extends beyond the window.

The landscape begins to change significantly. Already in the Khujirt Valley, the perfectly flat thread of the horizon began to rise into green hills. Now the hills are turning into higher and higher mounds. The green carpet of meadows more and more often gives way to the grey patches of stony slopes. Russet, sharp rocks replace colours of hill flowers. Only the sky remains unchanged – bright blue and endless.

The fauna changes together flora. Camels join usual herds of horses, cows and sheep. On the rocky patches, between the mud puddles, stroll cranes. Around them, the great vultures swoop down quietly, hiding bald heads between their wings, like muggers. High in the sky, keeping their dignified distance, eagles soar. Birds of prey perch on every roadside pole. Under the ever-watchful gaze of kites and buzzards, we reach an unexpected stop.

On the hill, right next to the main road, nestles a complex of statues. Thinking that this is a Buddhist temple, we climb the hill and stand eye-to-eye with dozens of stone horses. A wide semicircle of statues surrounds the whole complex. Behind the main area with a marble platform, massive columns and a glass altar under the golden dome, we encounter a series of skulls lying on the ground – horse skulls.

The place holds some fantastic story. However, granite plaques with descriptions inscribed in Mongolian tell us nothing. When – impressed, but frustrated by the lack of information – we return to the car, a young lad starts to chat with us in English.
“Where are you from?”
“From Poland. Do you, by any chance, know what is this place?”
“It is complex dedicated to the most famous Mongolian racehorses.”
“Oh, wow! So, there are the ones that went to an eternal retirement?”
“That as well, but most of the horses which statues you can see here, are still alive. What’s more – they still successfully race”, the guy patiently explains and at the same time signals us to join him and his family.

An older woman sitting next to him pulls out a thermos and pours a white liquid into a small cup.
“Here, try this one. It is our national treasure – ayrag – fermented milk of mare. Only two per cent of alcohol, so it will be easy on you”, the young man laughs and hands us over a cup.
Indeed, we can hardly taste any alcohol. Slightly fizzy liquid spills over a tongue with a sour but very refreshing flavour.

Having satisfied our thirst as well as curiosity, we drive on, to Bayankhongor.

We reach the place late at night, in the pouring rain and occasional hailstones. It is only the following day when we can adequately admire the beauty of the site. The morning greets us with a golden disc of the sun, illuminating the mountain range surrounding Bayankhongor. In front of our “living room”, shimmers a silver ribbon of river. Shaggy cows cross it lazily on the way to the lush green meadows. We unanimously decide to spend the whole day taking in the view and appreciate it as it should be.

Suddenly…
“Can you hear that?”
“Yeah. Where is it coming from?”

Joyful whistles and lively singing sound somewhere outside the car. A moment later, we can hear a well-known melody of Nokia’s ringtone. Then, there is silence. Minutes later the singing starts again. Dumbfounded, we open the side door of the car and face a morning visitor.

An elder Mongol, in an emerald shiny cashmere coat and black hat, exclaims joyfully ‘Ah!’ at our sight. He invites himself into the car and sits down at the table. He does not stop talking for a moment while gesticulating vigorously and laughing over and over again.

Finally, the man reaches to a pocket inside of his coat and pulls out a splendidly embroidered bag. There is a tiny bottle in it – a snuff. In the meantime, we come to our senses enough to remember what to do in a similar situation. We politely take a bottle, admire it and slightly dodging a cork we imitate snuffing. It works. Our guest is overjoyed and floods us with a stream of words we cannot comprehend. The fact that we cannot understand a word does not bother him at all.

Continuing the monologue, the man reaches to the top of his high leather boot and pulls out a flat wallet. He gently takes out a folded piece of paper and nearly shoves it into our faces. There is a phone number on the sheet. Our guest, gesticulating, demands we save it on our phones. He also tells us to give him our numbers. Once the exchange of personal details is complete, he test-call us. The successful trial concludes with another joyful “Ah!”. In the list of contacts, we put down our guest as THE GUY.

After about half an hour, the man gets ready to leave. Before, however, he repeatedly makes sure we call him. Finally, he grabs a box of cheese we offered him and walks out of our car. Suddenly, it gets strangely empty and quiet. Only in the distance, we can hear a lively singing interrupted by Nokia’s ringtone.

A few days later and a few hundred kilometres further, Andrzej answers the phone. He explains where we are and where are we heading to, he complains about the horrible state of the road and hangs up.

Almost a week has passed since we set our camp in Bayankhongor. Each day here brings new surprising events and most...