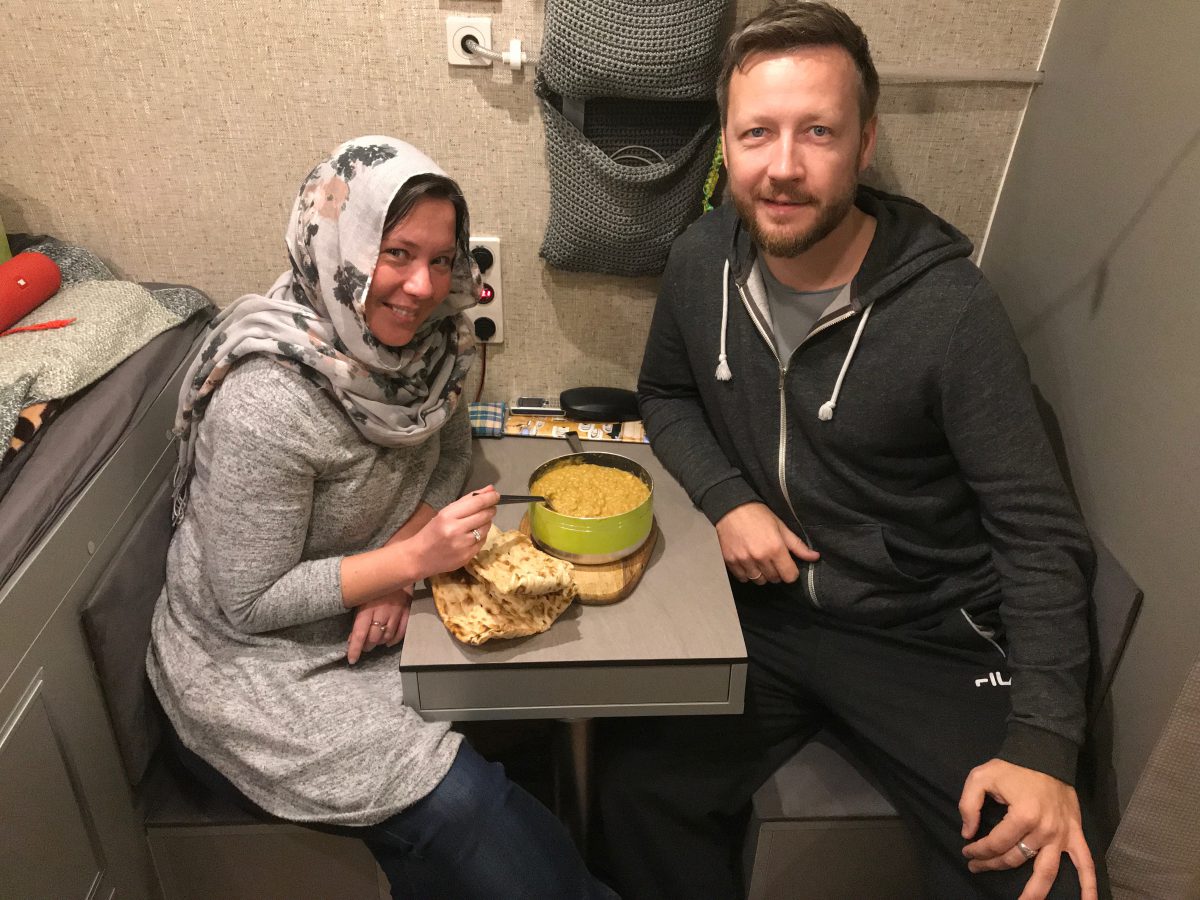 When we finally obtain a visa to India, we leave Tehran. Before we cross the city border, however, we stop at the Doulab Christian Cemetery.

A tall, thick wall separates the cemetery from the streets of the Iranian capital. We press the bell button attached to a grey metal door. After a few moments, a dark-haired man comes out. Hamid makes sure that we are not Muslims. They are not allowed to enter the Christian cemetery. Hamid hands us a simple information leaflet and sits us at a table in the shade of the trees. The tabletop is covered with information brochures and reprints about the history of Poles who found their way to Iran together with the Anders Army in the 1940s. For many of them, exhausted by the hardships of wandering, Doulab became their final resting place.

In typical Iranian hospitality, Hamid offers us tea and biscuits. He doesn’t speak much English, but he tries to recall the cemetery’s history as best he can and by showing black and white photos in reprints. Finally, he leads us to the Polish quarters along neatly kept gravel alleys under the shadows of trees densely covering the cemetery.

With a lump in our throat, we look at the two stone pillars marking the border of the Polish quarters. One of them bears the Piast Eagle, the other – the Virtuti Militari cross. There is a monument dedicated to almost 2,000 Poles buried here behind them: “In memory of Polish exiles who on their way to the homeland rested in God for the eternity – 1942-1944”. In silence, we leave a pennant of the Polish flag on it.

On Friday afternoon, we reach Kashan. Any excess energy remaining after a full day of driving, we’re saving for the famous bazaar and, more importantly – the food. Full of hope, we run into the tunnels of narrow streets meandering between low, rusty-walled buildings made of adobe. Their interiors promise a colourful feast of all sorts of goods and hot food that will inevitably restore our vitality. With joy, we stand at the door of the first of them. Closed. Just like the next one, and the one after, and all the others.

“What day is it today?” I ask suspiciously.
“Friday”, replies Andrzej.
“Iranian ‘Sunday’. Everything is closed.”
“We will starve.”

What appeared as a charming labyrinth of streets just a moment ago now seems like a sinister prison, in which we will be stuck forever. Swearing, we leave it behind and return to the homebulance. Fatigue and hunger combine into an explosive cocktail of frustration. And we still have to find a place for the night.

The city park that someone recommended is closed until further notice. The guard explains, using gestures and every form and body language, that now there is some renovation going on, but we can return in two months when the park reopens. Our reply is a smile through gritted teeth.

We continue scouting the streets of Kashan. Here, we can’t park because it is too close to the residential estate. Over there also does not work as there is too much street noise. Dark-red light spills on the building walls giving us a sign that the sun starts to set. We are still looking.

Finally, we leave the city and head towards the west, mountainous part of Kashan. We reach a green patch at the foot of steep, sandstone mountains. In one of the relatively flat coves, hidden between the rocks, we come across a picnic paradise. Entire families sit on blankets enjoying the last rays of the sun. Someone is playing football between makeshift goals. Someone else is cooking eggplants over the fire. The fragrance of juicy vegetables makes our salivary glands go mad.

Without a moment of hesitation, we also start cooking something quickly. While the water begins to boil and the oil sizzles in the pan, it gets dark outside. Picnicking families disappear along with the football players. The only thing left after the bonfire is grey smoke drifting through the cold air. The mountains around us blend with the night.

Suddenly … WHAM! WHAM! Someone bangs mercilessly in the front door of the homebulance. We grab potential defence tools, such as a chopping knife and a pot of boiling water. Andrzej leans carefully into the driver’s cabin. Three men are standing by the door. Darkness covers their faces.

“Is it the police?” I whisper, scared.
“No idea, they don’t wear uniforms. I’ll go and check. I have a flare gun from Wlodek, just in case.

Andrzej slowly, carefully opens the window, through which I can hear:

“Welcome! I’m Ali, and these are my cousins. We wanted to welcome you to our village. Here is a small welcome gift. My wife cooked it”, says one of the men and hands over a big pot of steaming vegetable soup. A pile of warm flatbread follows. “Here’s my phone number in case you need anything”, wishing us a good night, Ali and his cousins disappear.

Iranian villages. We greet them with a flare gun, and they give us soup in return. What a country!

The next day, we spend wandering around the city from which, according to legends, the Three Wise Men began their journey to Bethlehem. Walking along the narrow streets dotted with adobe houses, we can easily imagine all the ancient caravans squeezing through them. These ghosts of the past lead us through winding alleys to the spring-scented rose water distillery. Kashan has been famous for its production for centuries. Rose oil, pressed in the area, is exported all over Iran. It is used in the production of perfumes, cosmetics and even medicines. Also, every Iranian housewife has it on hand as an ingredient of Persian dishes. Every year in mid-May, Kashan holds a rosewater festival combined with a harvest of blooming rose flowers.

Wandering further along the streets of Kashan, we come across another of its treasures. A young man sits intently in a small building with the door wide open. Completely absorbed in his work, he doesn’t even notice us. A gentle smile lights his face as nimble fingers conjure azure magic. The artist’s thin brush brings to life a miniature elephant whose trunk stretches as if it wanted to catch a blue bird flying above. Next to it, enclosed in a hexagon of ceramic tiles, a musician hugs a sitar with tenderness. The fantastic beast glares at him from a miniature star glistening with dried blue enamel. Kashan tiles are famous throughout Iran. Their sophisticated, double-baked and hand-painted mosaics adorn the largest mosques and mausoleums of the country and the world. We managed to see the process of creating miniature masterpieces, which a moment later disappeared in the depths of the clay oven, where the tongues of fire harden and temper them.

The end of the day finds us at the city bazaar.

“Did you hear that? What a beautiful bird’s song!” I look around, searching for a cage with a feathered singer.

My eyes glide through the grid of tiny bazaar stores and its domed roof. Nothing. Only golden ropes of light flow down through skylights hidden between azure ceramic ornaments. Meanwhile, the vibrating trill sounds again. It is so clear and intense it cuts even through the bazaar commotion.

“Oh, come on! This bird has to be somewhere here!”

Shopkeepers and their customers look at me with a smirk as I swirl in the middle of the market aisle. The bird sings again and stops before I can locate it as if teasing me.

“I’m going crazy! Where is this little rascal hiding?!?”

And then my increasingly frustrated sight falls on two older gentlemen minding the corner stall with sweets. Their faces covered with silver five o’clock shadow stretch into a mischievous smile. One of the men starts whistling. Through the half-open mouth comes the trill of my non-localized feathered singer.

When we leave the bazaar eating sweets gifted by the mischievous seniors, we again experience auditory hallucinations.

“You seem to be from Poland”, states an Iranian man in… fluent Polish.
“Yes, that’s correct”, we reply, utterly shocked.
“I thought so. Lahestani have a particular aura. I am Mohsen, and I invite you for tea at my store. It is not far from here.”

A few minutes later, we sip potent, bitter tea through a sugar cube held between the teeth. We sit on the stools jammed between countless jars of paint and wallpaper rolls. Mohsen is preparing for his shop opening in a few days.

“Just a few months ago, before the USA imposed sanctions on Iran, I had a larger place, but now I can’t afford it.”
“Yes, Trump’s withdrawal from the nuclear deal and imposing sanctions is a real economic tragedy for Iran”, we comment sympathetically.

“Hmmm,” Mohsen muses, “the sanctions are bad, but it wasn’t good before the sanctions either. Our bad economy, we owe to our government, which instead of improving the living conditions of Iranians, loads money into the armed forces. Iran is a wealthy country. We are sitting on oil fields like on a throne, but ordinary people do not receive the money from it. Our leaders are more worried about women not wearing chadors than about the bad condition of the citizens’ lives. And Trump? At least as president, he keeps his promises to the Americans. Don’t get me wrong, I don’t want Iran to become a second Syria or Iraq, but only the external pressure can change our situation. Internally, we have no alternative to the rulers, and if the opposition appears, it is suppressed in the bud.”

Talks about the situation in Iran and Polish history, economy, and changes that our countries are going through continue long into the night.

“Lahestan is a beautiful country, and the Polish are beautiful people. If I could, I would move to Poland in a heartbeat. I have many friends from Lahestan”, says Mohsen, and he calls one of them to confirm his words.

Moments later, our international tercet talks over Skype to Gosia, who makes dumplings in her Wroclaw kitchen up to her elbows in flour.

In the morning, we leave Kashan in the rear-view mirror and head to the former capital of Persia – Isfahan.

We are waiting in the queue for tickets to the Buddhist temple of Erdene Zuu. Among the number of locals, we are...

The true face of Iran

“Get off!” the man shouts, pulling on our car door handle. “Get off! Get off!” he yells continuously, the only...