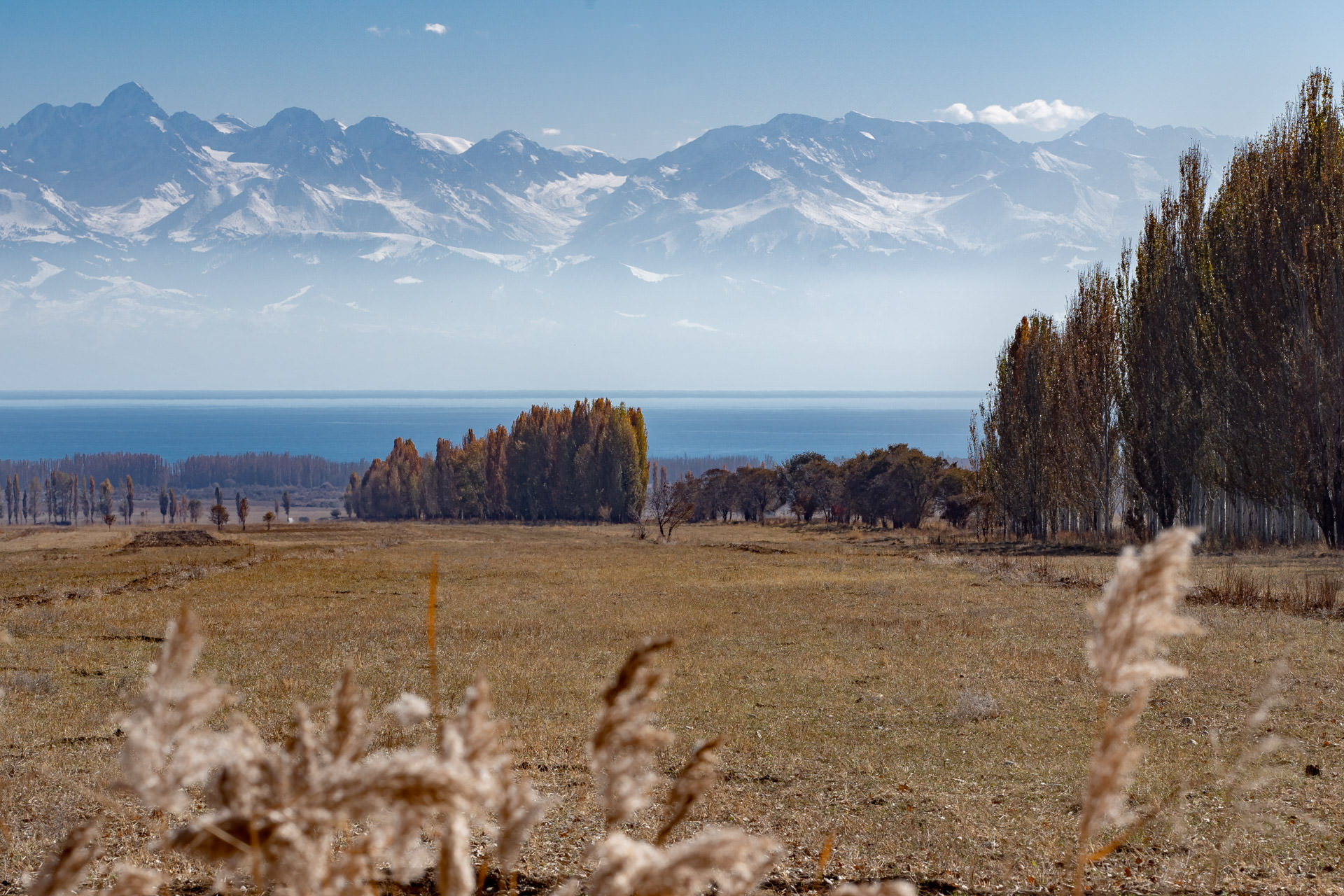 In Bishkek they told us, there is no point in going to Issyk-Kul at this time of the year. It is already long past the peak season. There is nothing there anymore. But stubborn as we are, in late October, we set off on tour around the second largest mountain and saline lake in the world.

At the northern side of the lake, there is nothing but beaches. Now, all are almost empty. Small shops and cafes in tin barracks are closed. Tired after the summer season, bouncy castles lie deflated beside thin skeletons of bungee jumping. On the banks of the lake, cruise ships drop off scales of summer paint and fall into the winter hibernation.

However, there are still traces of life in post-summer ghost towns. Strolling barefoot on the muddy sand, we encounter locals. Elderly gentlemen in elegant felt kalpaks offer us apples. We chat in broken Russian with grandmas in flowery headscarves. All of them tightly wrapped in sheepskin coats. They enjoy the last rays of the beautiful autumn sun.

Others are here as a necessity – to chase after herds of cows and sheep. Shepherds on horseback loudly whistle and curse the troublesome cattle. Between all the curses and whistles, they nod their heads in a greeting: “As-Salaam-Alaikum”. Peace be unto you.

The animals, however, could not care less about annoyed herdsmen and fully take over the beach. Young bulls melancholically look across the lake towards the snow-capped peaks of the Terskey Alatau mountain range. Starlings hitchhike on horsebacks. While shepherds whistle and curse some more, kids jump out from behind closed shops. They shout and laugh in the enthusiasm of wild fun.

We walk through this chaos, smiling. For us, these post-summer beaches are better than luxurious resorts during the peak season.

The town at the back of the beach does not seem likely to fall into a winter sleep either. The small local shops buzz with life. Kids are waving at us with their free hand, while in the other one, they hold a rope that ends with a cow. Next to them, men clad in nylon jackets, squatting in a beautiful Asian style, drink the afternoon beer. Their wives push strollers with the next generation. Smiles full of pride and gold teeth brighten women’s faces.

We drive through these scenes as if through slides of memories. I remember sitting at a similar shop in the countryside with my grandparents. My grandmother shone with pride, showing me to all her friends while my grandpa enjoyed an afternoon beer with his buddies. Even the fragrance of autumn in the air is the same.

Only, this scene with boys on horses is strange, unknown, exotic. With rosy cheeks, they gallop on horseback in a wild chase through a pitch. It reminds a school ground, but instead of goals, there are two clay cones. Instead of a ball – a goat’s stuffed skin. Boys tug on it and pull it. They fight for it pushing each other off the saddles. Once, the goat ends up in one of the clay cones, even a dog roaming between horse hoofs howls of joy. We are watching the traditional game of kok-boru.

We absorb all of this with at the backdrop of the Tienshan mountains. At first, they appear as not too tall rusty hills. Throughout the road, they turn into colossus sprinkled with a powder of snow. Beautiful. Powerful. The golden carpet of the steppe spreads at their feet. Muslim cemeteries dot its surface with brick castle-like tombs. At their tops – a crescent of the moon – an ancient symbol of the Ottoman Empire, today identified with Islam.

We stop, on average, every two hundred meters to take a picture. But what to capture? The colossus of the northern Kyungei Alatoo mountain range? Or maybe waters of Issyk-Kul Lake turned into a fiery spectacle by the setting sun? Or should we point the camera at levitating above the lake ghosts of the Terskey Alatau mountains?

We will decide tomorrow. Now we head towards a wild beach where we stay for the night.

A family of seven wakes us up in the morning. On the ground, women spread blankets in elaborate Kyrgyz patterns. Men pull food and drinks out of a car trunk. They offer us some sour cheese “kurut” and vodka. It is ten in the morning.

During their breakfast, the entire family closely watches my attempts to enter the lake.

Issyk-Kul translates to Warm Lake. In summer – maybe. Now in the late autumn, the icy water attacks my body with thousands of sharp pins. Minutes later, numb from cold, I do not feel anything. But it all pays off, as I get enthusiastic applause from the seven spectators on the shore. Despite shivering like aspen, I manage to stretch my trembling lips into a grin of pride.

A few hours later, we bid our farewells to the group as it was our own family. We exchanged hardly a few words, but they already want to adopt us. Among all hugs and kisses, they try to persuade us to go with them. But we are heading in the opposite direction, to Karakol.

This cultural melting pot is the fourth largest city of Kyrgyzstan and the capital of the Issyk-Kul region. Here, the over a century old Orthodox Church – beautifully decorated with a lace of wooden carvings – stands in the vicinity of the mosque. A very unusual one. If it were not for a small minaret, we would take it for a Chinese pagoda. No wonder. The mosque serves Muslims from China – Dungan people. Time and again, we pass narrow, low-rise houses. All of them are wooden, covered with a thin layer of white plaster. With beautifully decorated windows, they look exactly like those in Buryatia. It is a legacy of the wealthy Siberian merchants who settled here in the times of the tsarism.

We get to know the cultural diversity with all our senses, but especially with taste. Central Bazaar has a flavour of Dungan ashlan-fu. Two types of noodles – rice and wheat – float in cold sour and spicy soup. The Uzbek bakers in the local bakery make golden rings of mai tokoch – oil bread. Baked in a tandyr clay oven, with home-made plum jam and sour cream, it tastes like heaven. And for supper, we try lagman – broad stripes of noodles under a thick cover of meat and vegetables. It will not be easy to fall asleep, but it is so worth it.

Karakol is a border town between northern and southern banks of Issyk-Kul lake. The two sides cannot be more different from each other. The North is a paradise for sun and beach lovers. It is full of crowds and interactions. The South is for those who look for solitude, peace and silence. Two completely different sides of the same coin.

For two days, on the southern part, we wander on the mountain trails snaking along the emerald river. We trek rocky backwoods with paths made by herds of sheep, hike between snow-capped peaks and rainbow sandstone canyons. We pass fairy-tale villages, clinging to enormous, maroon rock formations. Their wooden houses covered with clay sit between branch-made fences. Through the muddy village pathways, babushka drags firewood. Spotting us, she goes straight to the business and asks if we want to rent a horse or buy some honey.

On a mountain clearing, in the middle of a crown made of snow-capped peaks, between patches of snow we eat hard-boiled eggs, tomatoes and lepioshka – hand-made, flatbread. We drink coffee from a thermos and feed a stray dog. A group of lumberjacks come for a chat, while they load fallen trees onto the trailer. A few minutes later, they disappear.

It is so peaceful and quiet here. The only sounds are the wind between the trees and the dog happily munching on the leftovers.

Beaches in the South are also different – wilder.

We get to know their wild side on the last day. For hours we try to dig up our homebulance stuck up to the drive shaft in the sand. We break our off-road traps, which were supposedly so strong that they have a lifetime warranty. We strain muscles the existence we never even suspected. And when we almost win the fight, the sky falls on us with freezing rain. The car gets stuck even deeper.

Finally, rescue appears in the form of a passing-by driver, and we are free to go back to Bishkek. When we left the capitol, it was a beautiful golden autumn. We come back in a harsh winter -five days later. Five days – a time way too short to experience Issyk-Kul fully. Even during the off-season.

At random, we enter the nearest restaurant Harper’s Restaurant & Lounge and sit at a table right next to...