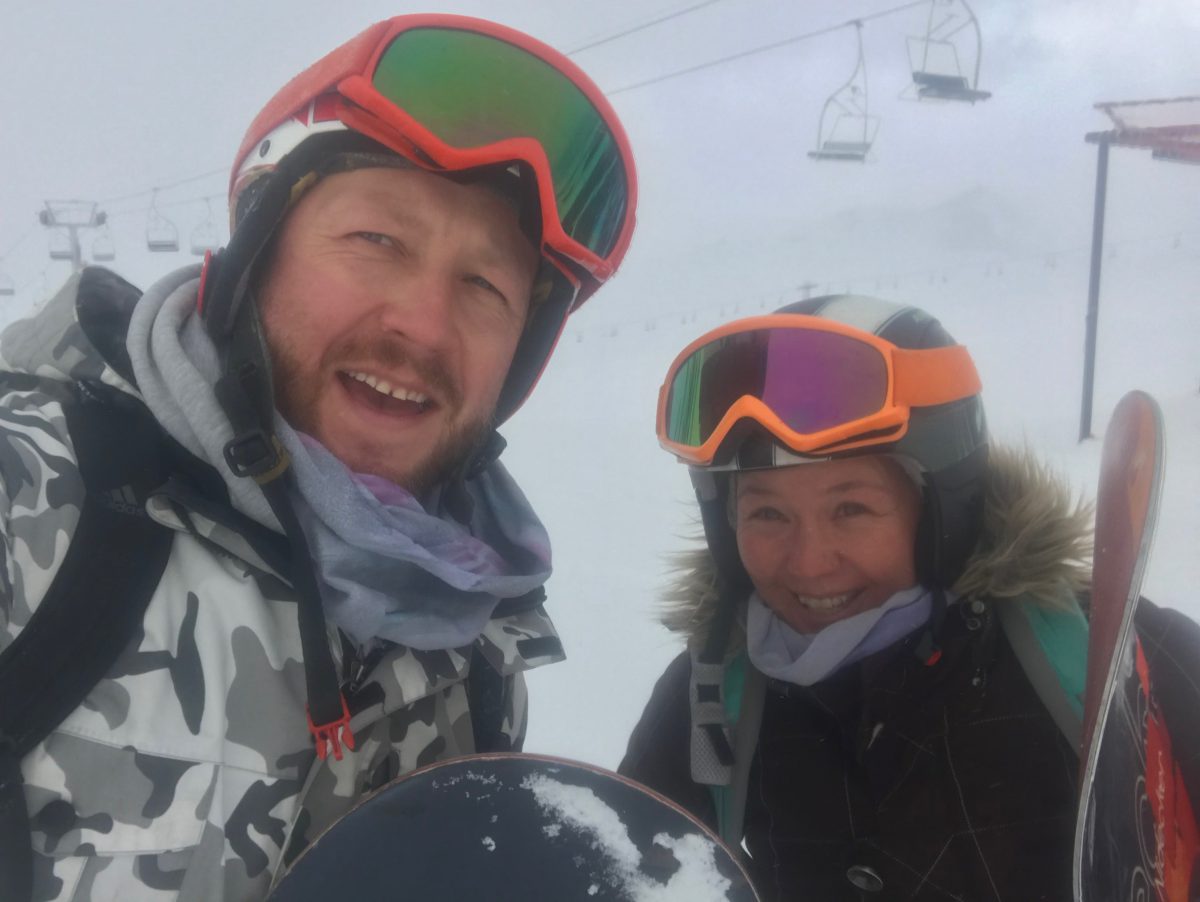 With the New Year, we get to know new places. From Tehran, we head north to the village of Masuleh in the Gilan province. We reach the place almost at night. The morning unfolds an amazing sight.

Rays of the just awakened January sun fall on the mountain slope. A warm golden glow reveals its secret. It is not rocky cliffs or sharp ridges. Its secret is an avalanche of adobe houses, flowing from the very top to the silver ribbon of the Masouheh-Rood-Khan River. The houses cling to the mountain and each other. This firm embrace turns yards of the upper homes into the roofs of houses below. The huts intertwine, interlace and knit into a labyrinth of fairy-tale settlements born from the womb of the mountain.

We climb the narrow alleys meandering towards the top. In a teahouse, we drink čāy (chai). Following the local people’s example, we put a lump of sugar between our teeth and sip a strong, bitter beverage through it. Our attempts result in a broad smile of the tea house owner and the enormous joy of other guests, who repeatedly ask for selfies. Almost at the top of the alley, we come across a furry gathering—all kinds of cats lounge in one of the huts’ windows frames. Fluffy mongrels run around its wooden door. Moments later, a bearded man emerges from around the corner and carries an armful of scraps for our smaller brothers. Even Masuleh, with a population of 400, has its own animal shelter.

The beginnings of the Masuleh settlement in today’s location date back to the 10th century AD. Previously, the village was 6 kilometres further, but repeated attacks from neighbouring colonies forced it to move to its current location. Until now, it has retained its traditional sand-golden colour, which not only adds charm to huts but helps to locate them during the frequent and dense fogs.

From Masuleh, we drive to another fairy-tale location – the Rudkhan Citadel. The fortress was built during the reign of the Sassanids (224-651). Its structure – stretching between two hills – is breath-taking. Literally.

At the height of 700 meters, we climb stone steps, muddy paths and crumbling slopes. Halfway through the climb, the sky overhead begins to turn into dark blue dusk.

“How much further? Will we reach the castle before sunset?” we ask a young couple who comes back from the top.
“Yes, yes. Easily! Another 15 minutes or so, and you’ll be there.”

We continue for a moment, just to hear from the lips of an elegant gentleman surrounded by an equally elegant family:
“Oh, they’re closing in 10 minutes. I don’t think you will make it.”

Confused, we decide to ask the final opinion of the next individuals descending from the top. They turn out to be a young couple – a beautiful Iranian woman with lush black hair, a gorgeous fitted red coat and in … high heels, and her companion – a sportily dressed guy, whose handsome face frowns with frustration.

“Sorry guys, do you know how far is to the top?” we ask.
“Brother! I would love to help you, but I have no idea! We didn’t make it ourselves. My lady is not able to walk in her shoes anymore, and we had to turn back!” the man replies, shooting lightning bolts from his eyes at the hateful high-heels.

In the end, we decide to go further. It turns out to be the right decision because we end up in a fairy tale. Dark, mysterious and beautiful. Massive stone towers stand at the top of the hill like enormous guards. The red of their burnt bricks intertwine with the green of nature that takes over abandoned buildings. Teeth of defensive walls grin at the steep slope strewn with a carpet of ferns and trees – naked in the January twilight. The guard’s whistle drives us away from the magical world. We are the last to close the gate. In the darkness, we climb down a million stairs leading to the town only in the narrow beam of a flashlight.

In the morning, awakened by the murmur of the river flowing at the foot of the citadel, we continue our journey – to the Guilan Rural Heritage Museum. The most straightforward and most accurate translation of the long name is an open-air museum. On 45 hectares in the Saravan Reserve, there are around 90 historic buildings, carefully transported from different Guilan regions and meticulously assembled within the museum complex. Ancient houses, a blacksmith’s shop, a school and a mosque are reconstructed here, among other structures.

We walk along the paths sneaking through the forest – dormant in winter. There are houses hidden in its clearances. Old huts with whitewashed or rust-coloured adobe walls – a sun-dried building material made of clay mixed with straw. Their roofs are wooden, shingled and sometimes very simple, covered only with thatched roofs. Here a merchant lived, there – by a furnace covered with black soot – a blacksmith worked, and over there a peasant would wake up at dawn to look after animals in pen made of sticks and straw.

Even though we’re in a distant country, its past is so familiar. One can forget oneself and think that we are walking along the alleys of the Polish open-air museum. Even the guide’s folk costume – a striped skirt, a short jacket with embroidered ornaments – strengthens this belief.

From the past, we are moving again towards modern Tehran. This time, however, we are going to its roof.

In the morning, we drive straight from North Tehran to one of the Elbrus Mountains peaks – Tochal. The mountain is over 3,900 meters high. There is a hotel at 3,500 meters, to which we are allowed to check-in only after medical examination. The doctor rules out any symptoms of altitude sickness, hypertension or pregnancy, and only then he sends us to our room and then the ski slope.

We snowboard in the embrace of perfect weather – cloudless sky, gorgeous sun, sparkling frost and soft powdery snow, in which it is pleasant to fell. We get to know the colourful subculture of Iranian snowboarders. They show a little rebellion against the Sharia law, ruling their country, in brightly coloured hair sticking out from under the helmets, waist-high dreadlocks and earrings adorning faces.

In the evening, despite our sore muscles, we instantly fell asleep.

The morning brings a snow blizzard. The funicular downstairs, for safety reasons, starts working only in the late afternoon. Soon, we are squeezed together with another snowboard enthusiast and our boards into a glazed lift carriage. The icy wind sways the carriage left and right. All around, there is only milky white of the blizzard. The situation is not encouraging conversation, and yet …

“Where are you from?” asks our companion.
“From Poland.”
“Ah! Beautiful country!” exclaims the fellow passenger and quickly adds, “I’ve just watched ‘Cold War’. What a movie! What style! Awesome! How did you like it?”
“Haven’t seen it yet”, we answer, slightly embarrassed that a random Iranian is more up to date with Polish cinema than we are.
“Oh, you have to watch is as soon as possible. Music is fantastic. I like Polish music very much. ‘Hey’ is my favourite group, you know”, continues the Iranian expert on Polish culture and takes out a small silver cigarette case. From its depths, he pulls two joints.
“Please help yourselves.”
Once we regain mobility in faces paralysed by surprise, we politely decline. Somehow this seems to be a safer option in the country where even alcohol is illegal.
“Too bad.”

The clearly disappointed gentleman hides away joints in the cigarette case, and we continue the conversation. The topics change, however. We move from pop culture to the history of our native country. Our new friend’s knowledge shines here as well. He asks about the post-communist changes, about “Solidarity”, and how Poland’s accession to the European Union influenced the country’s development. He listens to our explanations and comments himself. But, when we get to the topic of restrictions on freedom in Iran, he cannot take it anymore.

“You know what? I think I will smoke this joint. Have the other one for the road”.
And so, in the vapours of aromatic smoke, we continue our conversation.

Meanwhile, the ski lift goes lower and lower. We descend under the cloud line. The sun comes out. It is the most beautiful late afternoon. The one that turns from gold into ruby. In its fading rays, we leave the carriage. We say goodbye to our travel companion and go to the Roof of Tehran, which offers a view of the entire capital.

In the deepening darkness, flicker the lights of street lanterns, houses preparing for evening meals and cars rushing to make it on time for dinner. A group of people admires the same view from the benches next to us. Suddenly, a 30-something Iranian gets up and starts humming a song. His voice grows stronger and stronger to finally reach a lyrical tenor. Soon, other voices join him. Someone starts to play the harmonica. We sit and listen, hypnotised.

Once again, Iran takes us completely by surprise. It blows our minds, and it doesn’t need a joint to do that.

6 AM. A large parking lot by the Baku Bay. Our homebulance sways uncontrollably in powerful gusts of wind. It is...

We wanted to close the Volgograd stage quickly and efficiently, and hit the road toward Lake Baikal on Monday, 2...