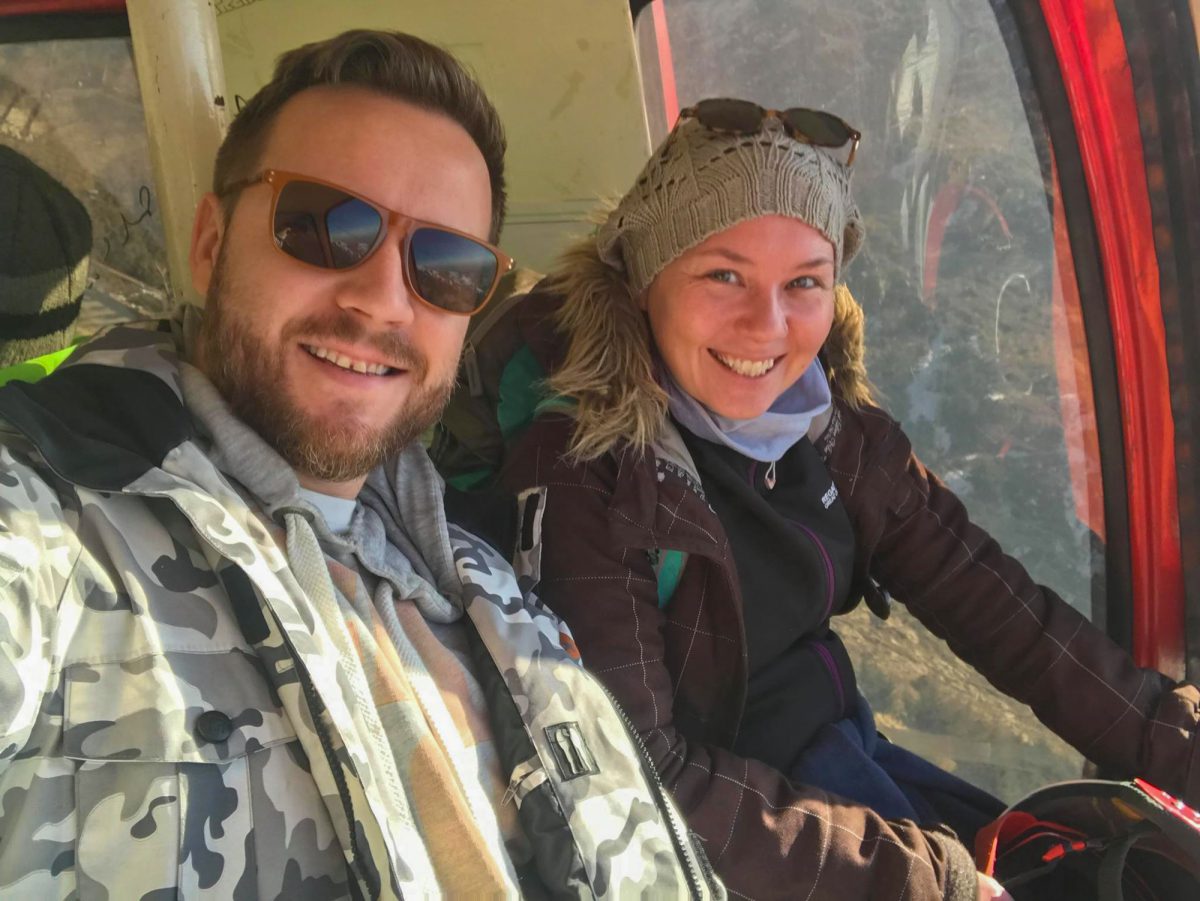 As a woman, the first thing I must do after entering Iran is to cover my head with a scarf. Iran is the Islamic Republic, which means that the country is under the official rule of religious law – Sharia.

Iran is ruled by Supreme Religious Leader Ali Khamenei, who issues Sharia-compliant decrees and makes final decisions about the economy, the environment, foreign policy, education, national plans and everything else in the country. That also includes drawing up guidelines for the presidential election under which the president-elect must obtain official approval from the Supreme Leader before being sworn in. Sharia does not distinguish between secular and religious life and, apart from politics, also regulates the daily life of all citizens of the state. Some of its guidelines – for example, a shawl covering woman’s head – must also be followed by tourists. Simply put – you want to visit Iran, you have to accept its laws. You don’t want to adjust, nobody is forcing you to enter the country.

The headscarf is just the beginning of the cultural differences we experience over the next four weeks in Iran. First things first, though.

Since the Azerbaijani-Iranian border, we drive in complete darkness. December snowstorm surrounds our homebulance. It makes it impossible to admire beautiful Alborz Mountains that we cross. At a snail’s pace, we climb slippery serpentines of roads leading to Tehran.

The streets of the Iranian capital remind us of Tokyo – multi-storeyed houses covered with tiny tiles; elegant, although gnawed by the teeth of time; all of them, within their walls, hide soul and history. Iran’s high culture, specific behaviour, attachment to tradition and the cloud of exoticism that surrounds everything make Iran our Japan of the Middle East.

And, there is also the language. Farsi floods our ears with the music of incomprehensible words and strange intonations. Its written version, visible on every sign, information board and signposts, confuses us even more. Even though it pleases the eye with its elegantly intricate lines of Arabic alphabet, it brings us no information. And this has to change especially if it comes to numbers written in the East Arabic system. It is known, however, that the necessity is the mother of accelerated education and studying menus of local eateries effectively trains us in reading numbers in no time.

The traffic, which does not differ much from a relatively organised chaos, teaches us a completely different lesson – survival. Motorists rarely use their indicators and even less frequently look in the side mirrors. Pedestrians cross the streets at their own risk, and traffic lights are a mystery altogether, when devoid of red and green, they constantly flash yellow light only.

Under these circumstances, we leave the main road and make our way to the hostel through the maze of narrow streets. They all are charming. With elegant houses and tall gates decorated with intricate metal ornaments. While beautiful, sometimes they are so narrow that we have to double-take corners to avoid out homebulance being stuck somewhere in the street maze. On top of that, we need to be extra careful not to end one of the nine lives of what looks like gazillion cats roaming around.

The hostel turns out to be a cosy house with a sun-drenched courtyard covered with futons and cushions, inviting you for a well-deserved rest. However, instead of listening to the voice of the heart (and cushions), we follow the voice of reason directly to the Visa Application Centre at the Embassy of India. Visa application process takes about a week, and we have just over twenty days left to drive through the whole of Iran to Zahedan, for border crossing to Pakistan – our next destination.

Of course, the first visa application attempt is a failure.

“Why did you enter Attari and not Delhi as your entry point to India?”, asks the lady clerk.

“Because we cross the border in Attari, not Delhi”, we answer truthfully.

“There is no flight to Attari, only to Delhi. You will have to change the whole application.”

“But we are not flying. We are going to Attari in our car.”

“I’m sorry. Attari is not in the system; you have to change the application and put Delhi instead. Besides, I can see that you put Attari also as your exit point…”

“Ok. It’s not in the system. We will change it to Delhi, but we have to print the corrected application again. Can we use your printer, please?”

“I’m sorry, but no. Right next door, on the right, there is a tourist agency that works with us. They will help you complete the form and print it for as little as 25USD.”

“Well, as I said, it is impossible to use our printer. You’ll do as you see fit.”

It is already too late to find an internet cafe with a printer, so we spend what is left of our day on a stroll along the largest pedestrian bridge in Tehran – Tabiat Bridge. Its 270-meter-high structure connects the two green spaces of Taleghani and AboAtash parks. As the pulsating stream of cars racing along the highway flows under our feet, we turn faces towards the north. Initially, blinded by the sun, we can’t see anything. With time, our eyesight adjusts, and we can distinguish the appearing shapes of buildings against the background of the snow-glittering Alborz Mountains. The white tops of the mighty massif disappear in clouds, blurring the border between the earth and the sky.

The setting sun chases us from the bridge to the Holy Defense Museum. Extending over 21 hectares, a vast museum complex with a park, fountains and conference rooms is dedicated to the Iran-Iraq war. In 1980, Iraq’s attack on Iran began an eight-year-long struggle for influence over the oil-rich Shatt al-Arab region at the mouth of the Tigris and Euphrates, and for establishing a political leadership position in the Middle East. Photo and video galleries presenting the tragic events of that period are complemented by exhibitions which, through the use of modern multimedia techniques, transfer us into the middle of the fight. We walk between the ruins of the school buildings and residential houses of the town of Khoramshahr. It is called the “City of Blood” because of a 34-day-long bloody offensive. We experience the heat of the desert and the paralysing cold of the dungeons where the prisoners were kept. Observing the simulation of a bomber raid, we feel the ground trembling under our feet, and a shock wave carrying the smell of burning wood and dust from demolished buildings. Each country has its version of events, the rightness of which it will defend at all costs. Iraq claims to have attacked, not wanting to let the Islamic revolution slip in. Iran says it only defended itself against an unprovoked attack. The Holy Defence Museum shows this version, but also – somewhat unintentionally – helps to understand how people feel wherever war occurs – defenceless, involuntarily entangled in political struggles that bring only suffering and tragedy.

With heads and hearts still spinning, we go back to the hostel to face the biggest yet surprise of the day.

The room we occupy is intended for eight potential guests. But since it’s long after the high-season we’ve got it all to ourselves… and a young guy who shows up in the middle of the night. Our new roommate introduces himself in English. His name is Marek and comes from the Netherlands. However, when he finds out that we are Polish, he swiftly switches to our mother tongue.

“Oh! It will be easier in Polish then! My dad is Polish, and I spend half of my life in his homeland.”

Tonight is Mark’s last night in Iran. He’s flying home tomorrow. Before doing so, however, he tells us about his impression of the country. Typically, stories would spin over a pint of beer or a glass of something more potent. But as alcohol is illegal in Iran, our conversation unfolds over non-alcoholic Baltika beer.

“What can I say. You have to see all the standard places like Shiraz, Yazd, Isfahan or Qeshm Island. But Iran is not about places. It is about the hospitality that will sweep you off your feet. I have never experienced anything like it. Strangers, people I met by chance invited me straight to their home. They fed me, insisted I stay the night, told me about life in Iran and its culture. Just like that. Just because they wanted me to get to know them from their perspective. Amazing country. Beautiful people. But you’ll see for yourself. I envy you that you are just starting your journey here. Ah! And definitely, you have to go to Tochal – a mountain in northern Tehran. You can take the subway to the suburbs and then it is about a half an hour cable car ride over beautiful wide slopes perfect for snowboarding.”

Marek’s stories make us unable to sleep. They make us impatient to meet this strange, exotic country and its people. Sleep doesn’t come until morning, and when we wake up, Mark is already gone. We are eager to explore Iran, but before we can do so, there is still a battle to be won on the visa application front.

From Kashan, we head west to the third-largest city in Iran – Isfahan. During the Safavid dynasty...

Only late at night, we manage to leave the Russia-Azerbaijan border crossing. We still have to drive a few dozen...