Russia – the streets without white bears 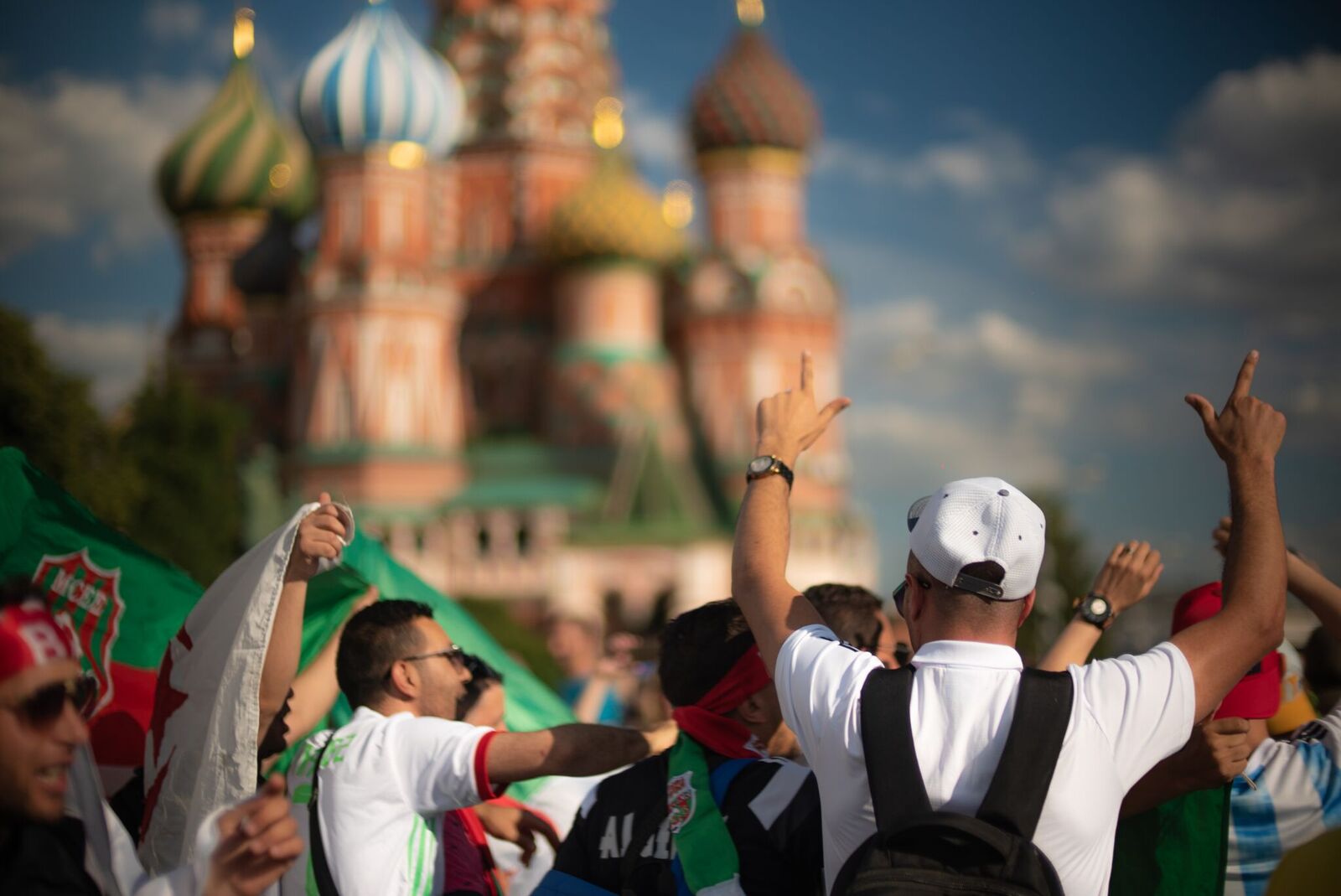 Metallic sounds of trombones and a rhythmic beat of drums. Loud cries in a foreign language. White and green wigs and jerseys in the same colours. The large crowd of supporters of the Nigeria national team celebrates their victory in the match against Iceland. The white and green wave floods Moscow’s Red Square.

June and July in Russia are all about the FIFA world cup. Hundreds of thousands of fans from all over the globe are coming over to support their teams, but also to see Russia with their own eyes. This “bear” of the East, which is as frightening to many as it is impressive and mysterious.

It is the same for me. I know Russia only from stories heard or read. Unfortunately, the vast majority of them – pejorative. Before, me and my husband, set off on our journey “in the ambulance” around the world, we had ears full of warnings. About the border control, whose checks would stop us for at least two days; about corrupt police who are fishing for bribes; about the roads, or rather the lack of such; about Russian hooligans, who are equal to bandits and, finally, about racist and hostile – especially towards Poles – citizens of the country.

Considering the historical and even present turmoil in Poland and Russia relationship, I was afraid the most of the latter.
The first opportunity for a nationalist clash appeared in the fan zone in Moscow. On a dozen giant screens hung against the background of an impressive university building, we watched the pre-Poland games. Of course, we were sporting white and red jerseys and proudly displaying our national flag.

We followed our new friend who introduced us to the next and the next one. And so it went. We drank together for the victory over the Colombians. Together, we drowned sorrows when it turned out that it’s not going to happen. Together we took photos with fans of Nigeria, Colombia, Japan and England. On faces, forearms and wherever there was a free spot we exchanged streaks of national colours.

The only stir in the newly established international relations was the question:

“And our monuments in Polsza? Why do you destroy them like that?”, one of our new pals inquired, clearly embittered.

While his companion tried to tell him to let it go and drink some more instead; while the fury of justice started to swell inside me, Andrzej simply answered:

“What do you mean, ‘why’? After all, it is your army that against the German attacked us in 1939, and then for almost 45 years, you held us in a steel grip.”

An expression of utter surprise and confusion fell on our interlocutor’s face. And myself? I got a moment of quite an epiphany.

How can I get mad at a man, maybe only about a decade older than I am, who was brought up in the ignorance imposed by his own country? How should I argue with a man who was taught from the early age, that the Second World War – or, as he knows it, the Great Patriotic War – began in 1941, when Hitler suddenly attacked his ally. That the Red Army was the hero of the nations because it stopped the Third Reich. That after the war, the USSR had to “take care” of the countries of the Eastern Bloc because they were too weak for independent functioning.

The decades of being fed with twisted facts – no matter how bad you want it – you cannot fix within 10 minutes. Even over a beer.

The debate has not progressed any further. What remained of it were utter astonishment on one side and an empathic understanding on the other.

That day, or any other in that matter, we did not encounter any racism or banditry of Russian fans or anyone else. There were many potential opportunities. We were at the stadium during the Poland – Japan match, and we were in many fan zones throughout the country.

Someone may argue that it was the atmosphere the event and sports rivalry that worked its magic. I must admit that similar thoughts also crossed my mind.

But then we got to tiny pubs in local neighbourhoods. Places brilliant in their functional simplicity. Several taps protrude from a wall above the bar counter. Each of them with a different type of beer: local or a foreign one, to your liking. The beer is poured into plastic bottles of the selected capacity – usually one and a half litres. At the bar – glassy fridges with dried fish, smoked cheese, etc. Everything so salty that you have to order a beer, again and again, to wash down the salty snacks. These goodies are in a takeaway option or consumed on the spot at the tables sticking with beer and on chairs nearly glued to the floor. Amazing place!

In quite a few such places, among the inhabitants of local blocks of flats, we watched the games. The atmosphere? Fantastic.

Our table was crowded continuously with younger and older customers of the joint, who wanted to practice their English, have a chat or a drink – or everything at once. Dima gave us good advice before the trip to Lake Baikal, the waitress was jokingly teasing merry-drunk customers, and the college student offered:

“Brother, sister do you want to smoke some marijuana? Very good Russian marijuana!”

‘Blood brothers’, ‘Balkan brothers’, are the most common terms we have been described with. It was, about the ties that unite us – rather than about what divides us – father was telling his son in the Moscow’s fan zone. There were tears in his eyes when he was saying the words to his son clad head-to-toe in Russian national colours.

So far, we have not encountered any manifestations of racism or aggression. What we have encounter instead is human empathy and kindness in the form of offered fruits, smoked fish, moonshine and bitter chocolate. Or a free stop on a guarded parking lot and a mechanic service paid for us by a complete stranger – just because you have to help one another in a simple, human way.

We passed border control in the blink of an eye. The police never stopped us demanding a bribe. The roads are in place – and they can compete with ours. And there are no bears on the streets … A part which I was quite hoping for.

With new tyres and in the fixed homebulance we reach Irkutsk. In the capital of eastern Siberia, we spent only a...