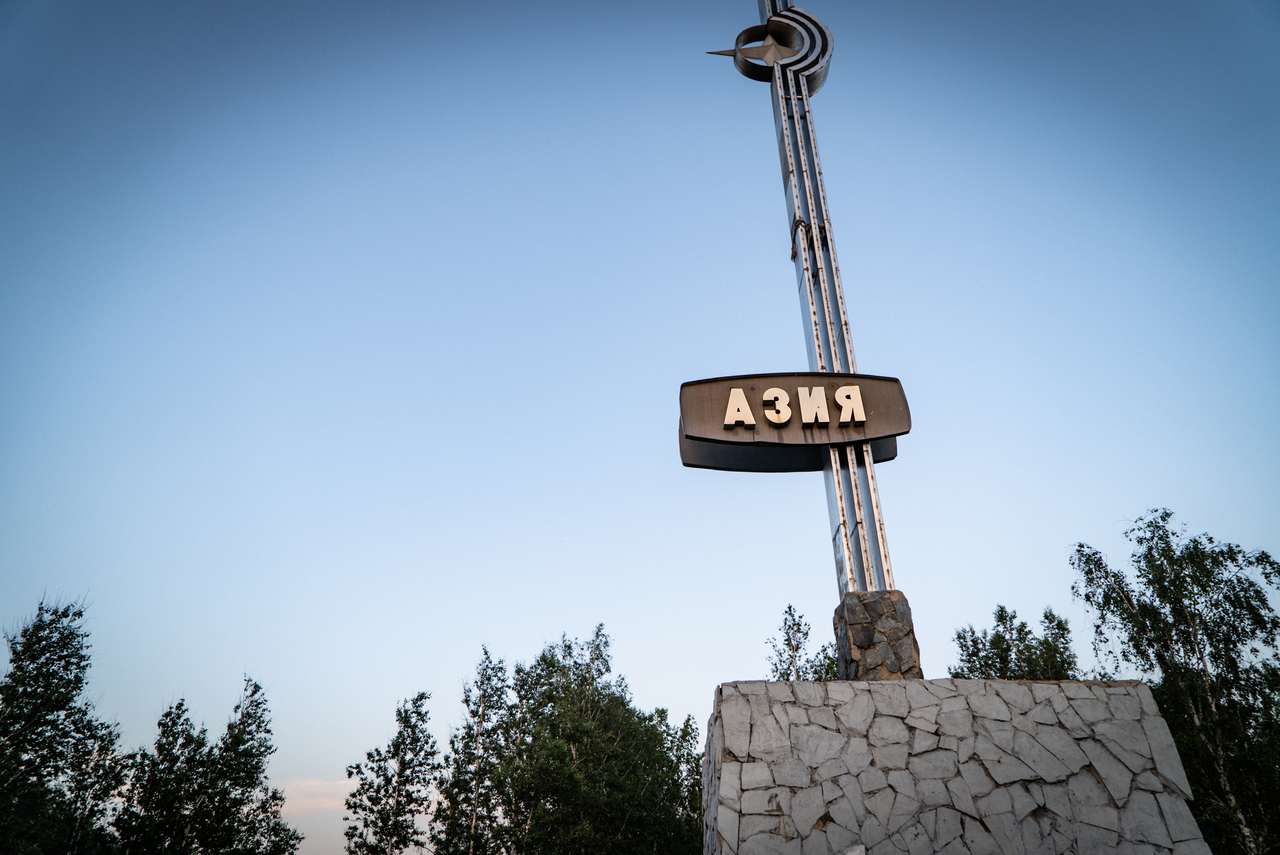 We wanted to close the Volgograd stage quickly and efficiently, and hit the road toward Lake Baikal on Monday, 2 July 2018.

Broken air conditioning and the necessity of shopping decided for us differently. Instead of early in the morning, we left very late in the afternoon. So late that we were wondering whether to stay in Volgograd for one more night. But no. If not now, then never.

This way, just two hundred kilometres away from Volgograd, we stopped for a night at the roadside eatery. Here, we watched the match and overpaid for the meal. At least the toilet was free.

A night full of excitement was provided to us by a disco in a nearby village and its drunken participant who at 3 am decided to pay us an unexpected visit, sticking stuck his shaggy head through our side window. Andrzej yelled his lungs out at the unpleasant guest, and the neighbouring truckers completed the work chasing away the individual as far as to the Ural Mountains probably.

The next day we stopped in Samara and visited Stalin’s Bunker. In 1941, the authorities of the Soviet Union, in the event of the German invaders taking over Moscow, decided to move the capital to Samara (then Kuybyshev). In the same year, the construction of a bunker for Stalin and members of the government began. It was built in such a great secret that everyone involved in the project – from engineers to builders – were under a lifelong gag order. The bunker is an exact copy of the Moscow metro station “Aerport”. Engineers did not have enough time to design anything new.

The work on the construction lasted 8 – 9 months, during which 25 000 cubic meters of soil was dug and removed in a way that the living soul would not notice. Until now, no one knows how the builders managed to do it. The finished building was covered with 23 meters of soil, 4 meters of concrete and layer of sand. It descends 37 meters and has several technical floors and several others with utility rooms, offices for the government workers and Stalin. One hundred fifty people, who can hide in the bunker, can survive here for five days – a time sufficient to dig up debris lying on the surface in the event of a bombardment, and purification of air after a possible gas attack.

Moscow never fell in the hands of Germans, but did Stalin ever appear in the bunker? Official records are silent on this subject. What is known for sure is that his closest family did hide here.

Samara is also known of mass production of spacecraft and satellites (as well as chocolate and vodka). And it is here, where Yuri Gagarin spent convalescence after his cosmic voyages. Unfortunately, we did not have time to visit the museum devoted to all these astronomical achievements, nor to stroll around Samara, which – from what we managed to see – seemed to be a lovely city with a beautiful promenade running along the Volga river.

However, along the Volga river, we tried to choose our next stopovers. To get to its cold waters, one time we had to follow dirty, bumpy roads, among the beautifully blossoming rural meadows, and the other time we had to squeeze between cars and crowds on the beach nearby the city centre.

After driving for another two thousand kilometres, the Volga River is an increasingly distant memory. The road to Lake Baikal climbs higher and higher, winding between hills covered with dense forest and valleys shimmering with silver mist-covered mountain lakes.

The cities turned into rare settlements of houses tightly attached to mountain slopes. In front of us, there is only a winding ribbon of the road (sometimes of very dubious quality) and roadside inns with “shinomontage” carrying first aid to worn tires; single, isolated stalls with a surprising number of samovars and parking lots filled with herds of trucks.

The quintessence of the changing landscape can be a steel mast shooting into the sky and a single inscription on it – АЗИЯ. We crossed the Ural Mountains. We are in Asia.

Just past the “Asian border” – on the roadside, there are dilapidated fuel distributors and a paid parking for trucks. The outhouse stinks. Flies buzz.

Along the parking lot, strolls a bodyguard sipping coffee from stained glass — a skinny, brown-eyed chap in a stretched T-shirt and tracksuit trousers.

“Parking 60 rubles, da?”, the chap casts a glance with a dark, slightly slanted eye.
“Da. And can we get to eat somewhere here?”
“You go over there. There are a café and a hostel.”

There is also a TV suspended at the ceiling, showing the World Cup match Russia – Croatia. Under the TV, at the table covered with oilcloth, the loud voice booms during the second half of the game:
“This is pine-cone moonshine!”, proudly announces Nikolai and pours a candy-pink liquid from the Sprite bottle. Apart from the colour, the liquid has nothing to do with candies. It burns a throat with the hellish fire of the hooch.

Nikolai – a slender, grey-haired man with a playful moustache – is a truck driver. As is the rest of the company we are sitting with. Nikolai is on the route from Omsk to Moscow. When asked, where is he from, he responds with pride equal to the one about moonshine – “from the Urals!”.

Next to Nikolai, much younger Alexei worries:
“Eh, the Croats will win.”
The whole company in unison drowns this worry in another glass of the moonshine.

Alexei also goes to Moscow, and with him – “sabaka”. A tiny, black mongrel that looks more like a hamster than a dog. It is two months now since they were home last time.
“Ah, sabaka! In the machine. Not allowed in here.”, he explains in response to my inquiries about a dog.

The third, and the most silent participant of the moonshine tasting – Sasha – only wanted to watch the game. Tables were packed, so he sat down with us. After a shy: “Can you pour me one as well?” – he stayed for many more.

The match ends, as well as the firewater. On top of that, “the Croats” really win.
Wanting to lift the spirits and morale of the boys, Andrzej returns from the bar with a handful of beers.
“Oh no, I do not drink beer”, Nikolai exclaims and disappears.
Briefly, he returns with a familiar Sprite bottle. It is full again.
“This is quince moonshine!”, after crying out loudly, he whispers, “and chocolate for the lady.”
A playful moustache rises over a broad smile.

The next morning is tough. It turns into equally tough noon. The head is lead-heavy. Through the fog of too short sleep and the fumes of homemade liquor, we can see the outline of objects on the counter next to the kitchenette – a plastic bottle with the rest of the quince moonshine and a bar of dark chocolate leaning on it.

In the afternoon – a drive to Omsk. A terrible drive. A narrow road covered with more holes than asphalt. Endless meadows surround it.
After several dozen kilometres, white walls and blue roofs of the buildings begin to shimmer on the horizon. A promise of the civilisation and, maybe even, a better road!
It’s just this barrier. On the road to Omsk? What for?

A young Russian woman in uniform comes out of the little lodge next to the barrier.
“Zdrawstwujte! And at the back there – you live there? In the machine, da?”
“Da, eto camper. Omsk, is it still far away?”, asks Andrzej by the way.
“Omsk?”, an eyebrow raises over an azure eye of the woman, “you know that you have reached the border with Kazakhstan, da?”

Russia - the streets without white bears

After all the action of digging out our unfortunate motorhome, we stopped in Mongolian paradise. Over a mountain...

Russia-Mongolia border crossing. In the chaos, a mass of bodies waves their passports feverishly and presses us to...