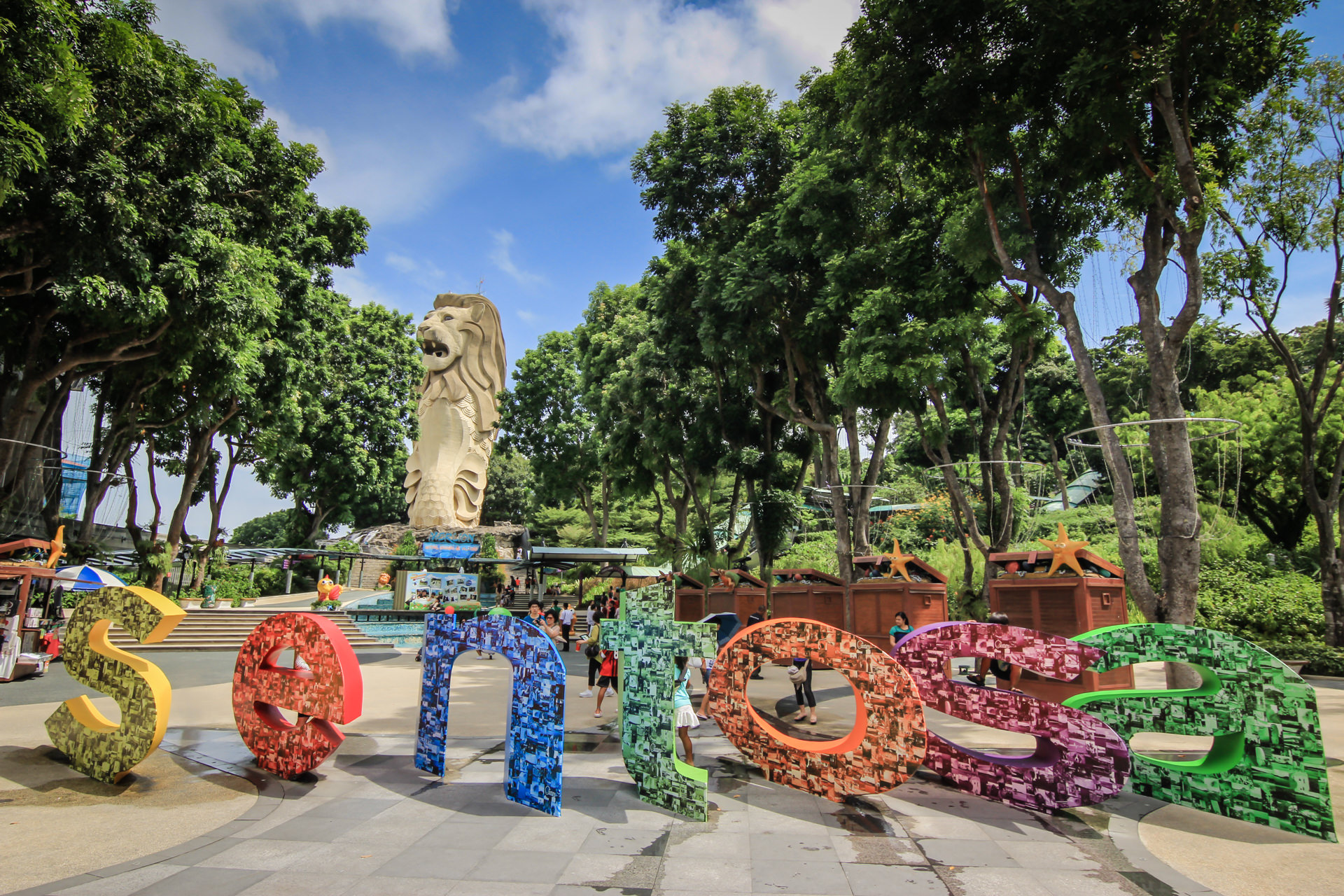 About 500m from the southern tip of the main island of Singapore lies its smaller neighbour – Sentosa. These five square kilometres are the national playground of Singapore. Locals call it ‘The State of Fun’. The island is divided into five main parts: north-western ‘Sentosa Cove’, northern ‘Resort World Sentosa’, central ‘Imbiah Lookout’, eastern ‘Siloso Point’ and the southern ‘Beaches’. Each of them is full of attractions, hotels, restaurants, and anything that is even remotely related to fun, relaxation and entertainment.

How the ‘dead island’ became the ‘place of tranquillity’

The past of Sentosa is painted in rather grey, if not black colours. A historical dark side of the island reflects the original name of the place – Pulau Belakang Mati. This set of Malay words can be translated in several ways: the island of the dead or the dead island. Each of them is associated with a particular period and events characterising it. Initially, the island was considered a place where spirits of the dead stayed. They took an extreme liking to the Belakang Mati and did not even think about staying on the Pulau Brani – a nearby island, which was their original burial place. Pirate ships, which began to prowl and wreak havoc in the area, also contributed to strengthening the deterrent name of the isle. Barren, ‘dead’ soil covering the place was not helping either.

Modern history makes the island a veritable fortress, strategically located at the entrance to the Keppel Harbour port. The construction of fortifications began at the end of the XIX century and culminated in 1930 becoming the British Royal Artillery Headquarter. Said fortification, unfortunately, seemed to be built in vain. During World War II, the Japanese attack Singapore from the north by the Straits of Johor and not from the south as military predicted. Belakang Mati was converted in a POW camp where British and Australian soldiers were held. Post-war period finds the island as a military base and training centre of a British army. Singapore armed forces took their place once the country obtained full sovereignty. They opened here a navy school and a maritime medical centre.

In the seventies, plans come forward to convert the island into an entertainment centre. Government seek Singaporeans’ help in renaming Pulau Belakang Mati, to something less terrifying. Request reverberates widely, and by the will of the people, the island is renamed to Sentosa (in Malay: peace, tranquillity).

– S.E.A. Aquarium – up to 2014 the holder of the world’s largest aquarium title – the Open Ocean (in the said year the title was taken over by the aquarium in China). The 18 million litres water tank accommodates 50 000 species of ocean life with such sea celebrities as sawfishes and manta rays. Aquarium also presents areas of the Java Sea, the Straits of Malacca and Andaman Sea, the Laccadive Sea, Persian Gulf and the Arabian Sea, Red Sea, lakes of East Africa, the South China Sea, etc. One of the most attractive parts of the aquarium is the Shark Seas where one can spot hammerhead sharks.
(Day pass – 32SGD/24USD; more information under the title link)

– The Maritime Experiential Museum – an interactive museum where visitors can explore the maritime history of Asia and the commercial port which Singapore evolved into. The museum introduces The ‘Silk Road’ – an interactive experience where sounds, fragrances and visual effects transfer visitors to bustling bazaars of the Orient. One can also get himself lost in the depths of a life-size replica of the Asian sailing vessel or to experience the storm on a sailing ship, under controlled conditions in multimedia, 360 ° cinema.
(Included in the ticket to S.E.A. Aquarium)

– Dolphin Island – an arranged sessions where visitors come face to face with dolphins. During an interactive session, their caregivers share information about customs and habits of these adorable mammals. Encounters promote as well the protection of dolphins in their natural habitat.
(Tickets: 68SGD/50USD – 398SGD/293.5USD – depending on the selected attractions; more information under the title link)

– Trick Eye Museum – a place where optical illusions rule. Walls, floors and ceilings are covered with paintings which, seem to jump out of their flat surfaces thanks to a unique 3D painting technique. Visitors have a chance to snap a photo of this visual madness.
(Tickets: 25SGD/18USD; more information under the title link)

– Lake of Dreams – a multimedia show with breathing fire dragons, laser beams shooting into the sky, or the fountain shimmering with colours and accompanied by fantastic music. All of this located in the very heart of Resort World Sentosa.
(Free attraction)

– Crane Dance – a magical love story of cranes – the mechanical ones. The strength and sincerity of their feelings, transform machines into real birds. Emotional spectacle full of pyrotechnics, water-light displays, as well as tears of emotion.
(Free attraction)

The district situated on the hillside of Mount Imbiah offers, among others, the following entertainments:

– Butterfly Park & Insect Kingdom – a place where very close encounters with birds, butterflies and insects are possible. In controlled, fortunately, conditions you can hold on your palm stick insects, different sorts of beetles and other worm-like creatures. A small substitute of rainforest with the whole palette of its colours and sounds.
(Tickets: 16SGD/12USD; more information under the title link)

– Sentosa Nature Discovery – a trail leading through lower and upper parts of the rainforest. A photo exhibition at the beginning of the trail explains what to look out for and how to find it. For both, young and older nature detectives.
(Free attraction)

– Images of Singapore LIVE – a multimedia and interactive journey through time. It shows a development of Singapore from a tiny fishing village into the financial giant. Fifteen thematic installations full of audio, fragrance and visual effects. One of the main attractions is ‘rafting’ on the Singapore River, running along some of the most famous county landmarks: Marina Bay Sands, Merlion, route of the Formula 1 race, etc.
(Ticket combo: Images of Singapore LIVE + Madame Tussauds Singapore – 39SGD/29USD; more information under the title link)

– Sentosa 4D Adventureland – a place where the fourth dimension rules. Its offer includes a movie screening starring Dwayne Johnson, simulation of a wild ride through the jungle in a wooden log and a shootout in the Wild West. All of this in highly interactive 4D experience.
(Tickets are usually combined with other attractions. Prices start from 39.90SGD/30USD; more information under the title link)

– Mega Adventure Park – definitely for these who love the adrenaline rush. The park offers all types of zip-rides and jumps from dizzying heights.
(Tickets: 15SGD/11USD – 99SGD/73USD – depending on attractions and packages; more information under the title link)

– Skyline Luge Sentosa – an intriguing combination of a chairlift and lugging. While going up, one can enjoy a bird’s eye view of Sentosa. There are two tracks for lugging down: the Dragon Trail (688m) and the Jungle Trail (628m).
(Tickets: 18SGD/13USD – 88SGD/65USD – depending on the package; more information under the title link)

– Sentosa Merlion – a large, 37-meter high symbol of Singapore. It offers one of the most interesting observation decks – just between Merlion’s jaws armed with enormous fangs.
(Tickets: 12SGD/8.85USD; more information under the title link)

– Tiger Sky Tower – the observation tower with a rotating cabin. It rises at 131 meters above sea level and offers a fantastic view of Sentosa and the neighbouring island of Indonesia.
(Tickets: 18SGD/13USD; more information under the title link)

The area around Fort Siloso offers amongst others:

– Combat Skirmish LIVE – the similar to a paintball laser tag combat. Their signature offer is ‘The Battle of the Fort’- simulation of the critical fight against Japanese occupant. The whole action takes place among the remains of military fortifications.
(Tickets: 25SGD/18USD – 700SGD/516USD – depending on the package; more information under the title link)

– Fort Siloso – the only, fully preserved fortification on the Sentosa Island. In addition to the military quarters and tunnels, there are ‘Surrender Chambers’ where scenes of the WWII military power transfer are recreated. Memorable events are presented using real life-size wax figures.
(Free attraction, excluding Surrender Chambers – tickets: 6SGD/4USD – 20SGD/15USD; more information under the title link)

– Fort Siloso Skywalk – an opportunity to enjoy surroundings of the Fort Siloso from a bird’s eye view. Sky-bridge is nearly 200-meter long and rises at 36 meters above ground level.
(Free attraction)

The stretch of sandy beaches covering the southern part of Sentosa. Multiple attractions, bars and restaurants are up for grabs for the visitors. Going from west to east:

– The Flying Trapeze – everything associated with jumping, flying on the trapeze
(Tickets: 10SGD/7USD; more information under the title link)

– Wave House Sentosa – a huge reservoir, where surf enthusiasts will feel like in paradise. Artificially created waves reach a height of 3 meters.
(Promotional tickets start at 45SGD/33USD per hour; more information under the title link)

– SeaBreeze Water – Sports @ Wave House – this place offers a broad range of water sports, including the first in Asia flight on a water-powered jetpack.
(Tickets star from 25SGD/18USD – depending on the attraction; more information under the title link)

– IFly Singapore – an air tunnel offering a free fall experience. Definitely for those who love an adrenaline rush.
(Tickets: 89SGD/65USD; more information under the title link)

– Kidzania Singapore – the city ruled by children who try real, grown-up jobs: lawyers, doctors, teachers, etc.
(Tickets from 24SGD/17USD – depending on the age range; for more information under the title link)

– Port of Lost Wonder – the giant playground with the pirate ship in the centre. Admission for adults – only with the permission of the little ones.
(Tickets: 10SGD/7USD; more information under the title link)

The paradise for dogs and their owners. The only place on Sentosa where canine lovers can indulge in sunbathing with their pets. At the entrance to the beach area, there is the Tanjong Beach Club. The bar and restaurant with never-ending beach parties.

The national playground can be reached by:

– Sentosa Express – the monorail departing from the VivoCity shopping mall (3rd floor). Tickets can be bought directly at the station (4SGD/3USD). The monorail accepts EzLink card – a travel pass for the whole mass communication in Singapore. Travel time – a blink of an eye.

– Singapore Cable Car – its first station is on Mount Faber. There is another stop in the mid-way in HarbourFront Tower 2. Ticket prices start from 33SGD/24USD.

– Sentosa Boardwalk – the most standard and pleasant approach. A stroll along the wooden promenade leading to the very island. At the recommended pace – slowly and pleasingly – the amble takes approximately 20 min. Boardwalk starts at the VivoCity mall and is adorned with art installations, mini- gardens with natural vegetation and all sorts of cafés and restaurants. A fee at the Sentosa gate – 1 SGD

Without time limits. Various attractions, of course, have their opening/closing times determined. Generally, however, the island does not sleep. Mostly thanks to the night clubs offering entertainment until late night or early morning.

Thanks to hotels available on Sentosa is possible to spend here even a whole week. It will be, however, quite costly, as the cheapest accommodation is around 155SGD/108USD per night. The food situation looks way better, as you can find places such as the Malaysian Food Street, Ruyi, or Joe & Dough with meals not exceeding 10SGD/7USD. Wall in a wall with them, stand fine restaurants, with prices of a meal ranging from dozens to hundreds of Singapore dollars.

As for attractions ticket prices – these vary considerably (see links under the title pages). Most of them, however, offer promotions or ‘bundle’ tickets covering entry to several places. There are also those for which you do not have to pay.

Malacca - from a mouse deer to the UNESCO World Heritage Site

Traditions of the Chinese New Year - the Reunion Dinner

A tiny mountain village. A patch of asphalt only occasionally appears on the narrow streets. The rest is covered in...

An older man, tucked under a reed hat, stirs with a long ladle content of an aluminium pot that steams on a...