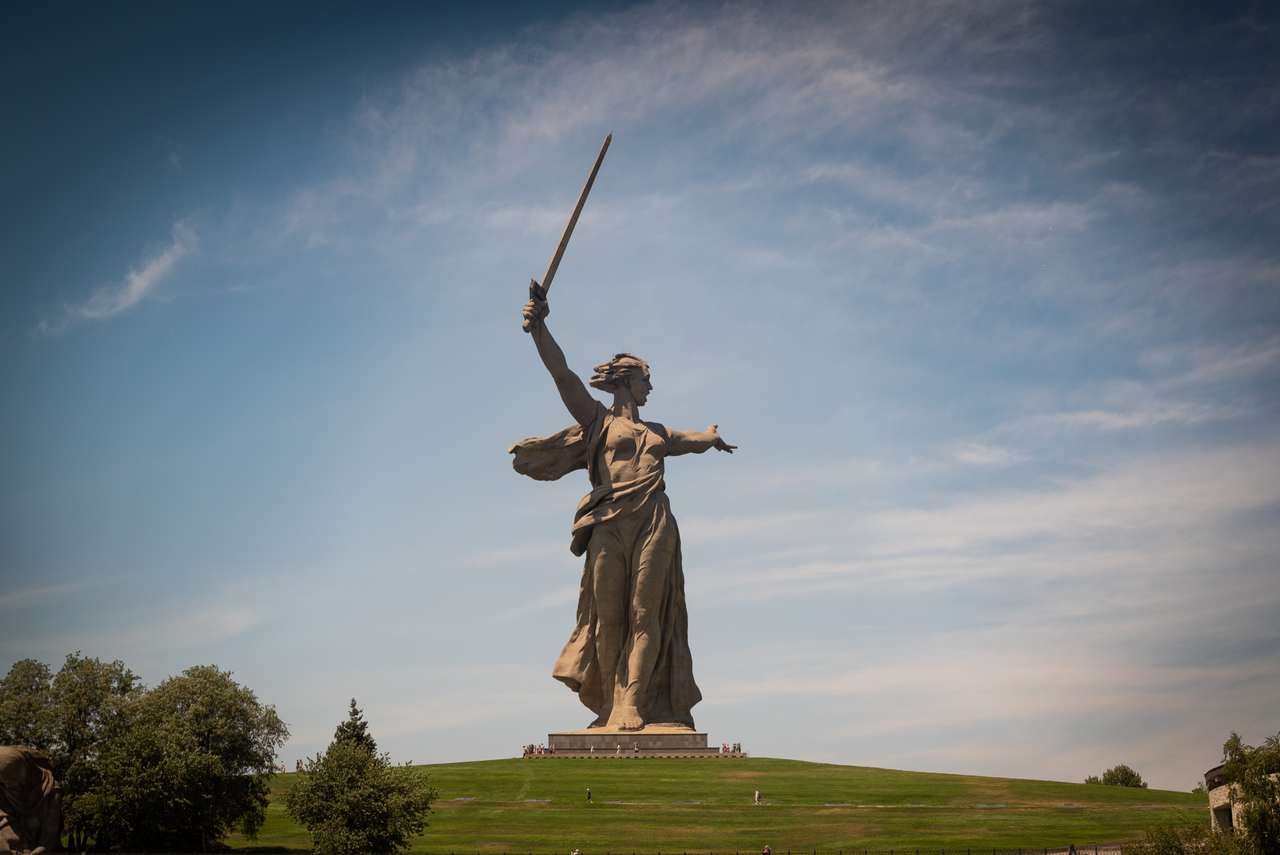 Three countries, 3,800 km and two weeks after the start of our journey around the world in an old ambulance (aka homebulance), we found ourselves in Volgograd at Poland vs Japan match. The city welcomed us with almost 40-degree heat and the victory of the Polish national team in the game for the honour. Could be worse.

In addition to sporting emotions, we also did a bit of sightseeing. Volgograd, once known as Stalingrad, is not a beautiful city. It is marked by chaotically scattered blocks of flats amid an otherwise flat landscape with the brown waters of the massive Volga River in the background. Nevertheless, the city is worth a visit because of its fantastic history and the role it played during the Second World War.

It was here that bloodiest battle took place, in which the Germans and Russians clung in a mortal grip fiercely fighting for the hill towering over the city. It was the perfect strategic point to attack the town for some and an excellent defensive position for others.

Today, the hill – known as the Mamayev Kurgan – is the resting place of over 34,000 soldiers of the Red Army, who gave their lives for its protection. In their honour, the mound crowns a mighty statue of a woman in loose robes with a raised sword. The monument of The Motherland Calls – as that is the name of the statue – at the time of its creation (1967) was the tallest construction in the world, counting 85 meters from the ground to the tip of the sword. Currently, it is the world’s highest statue depicting a woman.

The museum-panorama “The Battle of Stalingrad” is also worth visiting. In addition to war artefacts, one can admire a gigantic (16m x 120m), a panoramic painting depicting the moment of triumph of the Red Army during the critical assault on Mamayev Kurgan. The art piece playing with perspective, complemented by three-dimensional ‘extensions’ of the image into reality, makes a big impression. The technique is similar to the performance of our native The Racławice Panorama.

Before we could familiarize ourselves with a piece of recent history and cool down overheated limbs in the mercilessly cold Volga currents, we had to cross Lithuania, Latvia, Estonia and a large part of Russia – Including Moscow. Unfortunately, the ruthlessly chasing us time did not allow experiencing the three above countries as we would like. However …

In Lithuania, we were enchanted by Trakai and its medieval castle on the island, which looks like a miniature of the Malbork Castle. For this reason, it is also called The Little Marienburg.
In Vilnius, we tasted the traditional Cepelinai – potato balls with different filling: meat, mushroom, and cottage cheese, served with sour cream or curdled milk. Cold beet soup with boiled eggs and potatoes perfectly complimented it.

In Latvia, we stopped in the Baltic Sea town of Salacgriva. Here, for the first time, we experienced white nights with the sunset just before midnight and sunrise only two hours later.
In Riga, we hid from the rain in a restaurant serving tasting sets of traditional Latvian dishes. There were: pea soup and fish cutlets with mustard sauce; a phenomenal, mouth-watering salted herring with sour cream and potatoes; for a dessert – sweet-bread soup with whipped cream, dried fruits and nuts. And at the end of the day, we visited gigantic market halls with an impressive 3,000 stands located in the old zeppelin hangars.

Estonia surprised us with its … Finnish-likeness. Names of towns, a kind of melodiousness in the sound of language – we did not expect this. We also did not expect that the old city of Tallinn would steal our hearts and take us back in time.

Narrow, cobbled streets winding steeply upwards or downwards with gothic bastions or gold-finished Orthodox churches, led us to the very heart of the market square, where the town hall reigned. And there, we have faced the ‘III Draakon’ inn – the dark, bare-stone interior lit only by the faint flames of candles, where barmaids in medieval clothes drilled the customers. The menu consisted solely of vegetable soup, ox ribs, stuffed bread and beer. Everything served in clay, chipped bowls and mugs. Massive tables of roughly hewn wood had to be cleaned up by customers themselves to avoid the spirited anger of the barmaids. A unique place!

From Estonia – the last country on the list of the visa-free Schengen zone – we entered Russia. The first filling of the papers, the first inspections of our house on wheels, the first uncomfortable feeling – will they let us in or will they not?

They did. And Russia greeted us with a drizzle ended by a beautiful double rainbow for good luck.

Wildly rushing, we reached Moscow, where the ubiquitous atmosphere of the FIFA World Cup surrounded us immediately. Russian banners on every street-lamp welcomed fans from each participating country. Colourful groups of fans parading in national colours took over the city. Even succumbed to them the town most prominent landmarks: Red Square and the beautiful Moscow Metro with platforms resembling more ballrooms than the train platforms.

Would Russia be the same beyond the time of the championships? Fun, friendly, hospitable and completely opposing stereotypes (well, maybe apart from the state of roads)? It’s hard to tell. But at the moment we enjoy what we have – a joyful, sporting atmosphere, human cordiality and smoked fish offered to us by total strangers in the spirit of ordinary human kindness.

Thaipusam - the way of finding bliss

The first longer journey outside Baku takes us through the rusty steppes. Rather than the vegetation, they are full...