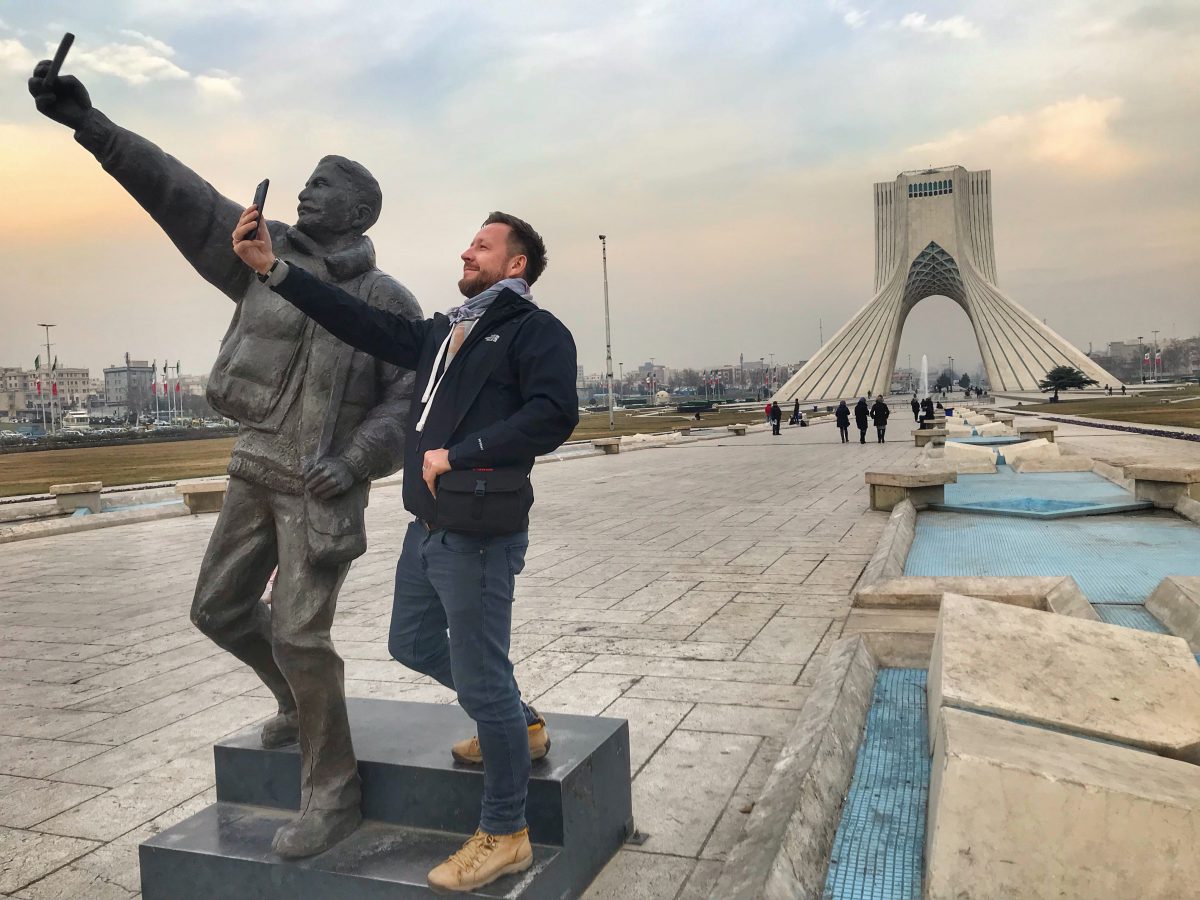 The next encounter at the Visa Application Centre at the Indian Embassy in Tehran is tough, but we come out of it victorious. In a week, we are to collect the visa.

Meanwhile, we are changing the hostel into a cosy flat of our CouchSurfing hosts – Mohammad and Raziye. The lady of the house spoils us rotten with homemade dishes. We get to know all kinds of eggplant variations, such as kashk e bademjan – eggplant stew with strong, fermented yoghurt, and mirza ghasemi – also eggplant stew, but with egg and of much softer silky taste. We try flatbreads with carrot jam and sweet cream; white sour cheese with olives and nuts; saffron rice, with the burnt crust for which we fight like lions.

During breaks between the feasts, we get to know Tehran. Our first steps we direct to the Golestan Palace. Built in the 16th century by the Safavid dynasty (1501-1736), it became the official seat of Persian Shahs during the Qajars (1794-1925), who chose Tehran as their capital. The Qajars took every effort to ensure that the palace would not cease to delight with its splendour. The Pahlavi Dynasty (1925-1979) had different plans for this place and destroyed a large part of it, using the freed areas for modern buildings. Although it is heavily depleted, the palace complex still amazes with its rich ornamentation. Fabulously colourful mosaics of ceramic tiles cover the walls of the buildings. Their interiors shine with crystals of mirrors decorating walls and ceilings. Intricate paintings, sculptures and reliefs complete the whole. At one of the palace terraces, there is a throne hidden between soaring arcades and murmuring fountains. According to legends, it was the favourite resting spot of Shah Nasser ad-Din Shah Qajar, who spent hours here, relaxing and smoking water shisha. The terrace next to it is the site of the famous Marble Throne. A veritable work of art, intricately carved in Yazd’s yellow marble rises on the stone figures’ shoulders. Dozens of mirrors covering the terrace walls reflect and multiply its majestic silhouette. The spectacular place once witnessed the coronation of shahs.

On the way to the Milad Tower, from where we can see Tehran from a bird’s eye view, we squeeze through the Grand Bazaar. It is a city within a city. The narrow alleys stretching for kilometres under the soaring domes of the roof are a madness of colours, textures, shapes, fragrances and flavours. Tiny stands built into thick stone walls offer everything you could wish for – jewellery, embroidered chadors, woven carpets, aromatic spices, traditional and modern clothing, everyday household items – in one word, everything. Time and again, the crowd of buyers parts like the Red Sea to let the suppliers pass. Arching their backs under the burden of goods, the men pull two-wheeled carts with sweat on their foreheads. Their wheels rattle against the cobbled alleys. The vibrating sound bounces off the walls of the bazaar in a deafening echo. Between the shops hidden are mosques, patios with stone benches under skylights letting in rays of light, bathhouses and caravanserais with murmuring fountains and gardens where centuries ago, traders came from afar and took their rest. It is said that the bazaar is older than the Iranian capital – it came to be even before the Teheran village itself.

From a place where the time stopped, we get to 435-meter-high icon of modernity. Completed in 2007, the Milad Tower is the sixth tallest in the world. From the observation deck at the top, we admire Tehran. The perspective has turned the city into a cluster of Lego-like mini-houses. Like white lava, they spill up to horizon that rises majestically into the mighty Alborz Mountains.

The end of the day finds us at the Azadi Tower (Freedom Tower), built-in 1971 to celebrate the 2500th anniversary of the Persian Empire. The structure resembles a white gate, descending towards the top into a soaring rib vault, which, according to the tower designer, symbolises the combination of classical and post-classical Iran. The 45-meter-high structure is lined with 8,000 pieces of marble. While it lacks the impressive size of Milad, the sight of Azadi’s white stone structure against the azure sky compensates for everything.

Long past sunset, we are finally turning back home; however, in a somewhat melancholic mood, as today is the last day of 2018. In another country, we would already be chilling champagne in preparation for the New Year’s party. Apart from the fact that in Iran champagne – like any alcohol – is illegal, Iranians celebrate their New Year (Nowruz) on the spring equinox. Imagine our surprise when, at home, Mohammad and Raziye do not let us rest, but order instead to get ready for a house party at their friends’ place.

Following Iranian standards, I am wrapped from head to toe in a loose long-sleeved tunic-dress, jeans and a mandatory headscarf covering my hair. Under the scarf and hair, thoughts are buzzing.

“How do such house parties look like here? There can be no music because if it is loud in the apartment, the police can lock everyone up. There will be not even a small beer because alcohol is prohibited throughout the country. Interesting. Interesting”.

I quit pondering because we have reached our destination. Knock on the door. I nervously fix my headscarf and pull dress sleeves as low as possible. The door opens. My stereotypes die screaming.

We are greeted by a beautiful Iranian girl in a black cocktail mini dress and deadly makeup. Behind the hostess – one of the students renting an apartment – music blasts. The rest of the crew has heaps of fun to the well-known MTV hits. We join the party as soon as I manage to pick up my jaw from the floor.

Every once in a while, the radio stops playing. Then, the guys start singing Iranian hits. Mohammad plays the harmonica. Girls bring us to the circle and show us how to dance.

“Now put your hands up and wave as if you were greeting the sun.”
“Now we’re digging the ground to sow seeds.”
“Now change the direction!”
“Now everyone goes toward the centre. Faster! Faster!”

The sound of laughter mixes with music. Eyes sparkle. A blush sneaks up on cheeks. Then, a massive bottle of clear liquid appears on the table, and the countdown begins.

We all embrace each other, wishing the happiness, health, constant optimism and hope for a better tomorrow. With a homemade, illegal raisins moonshine, we toast with people who do not celebrate the New Year. With people who organised a distant to their culture festivity for strangers, just because we appeared in their home and country as guests. Just because the rules of hospitality say so, and Persian hospitality knows no bounds, nor boundaries.

From Kashan, we head west to the third-largest city in Iran – Isfahan. During the Safavid dynasty...

As a woman, the first thing I must do after entering Iran is to cover my head with a scarf. Iran is the Islamic...