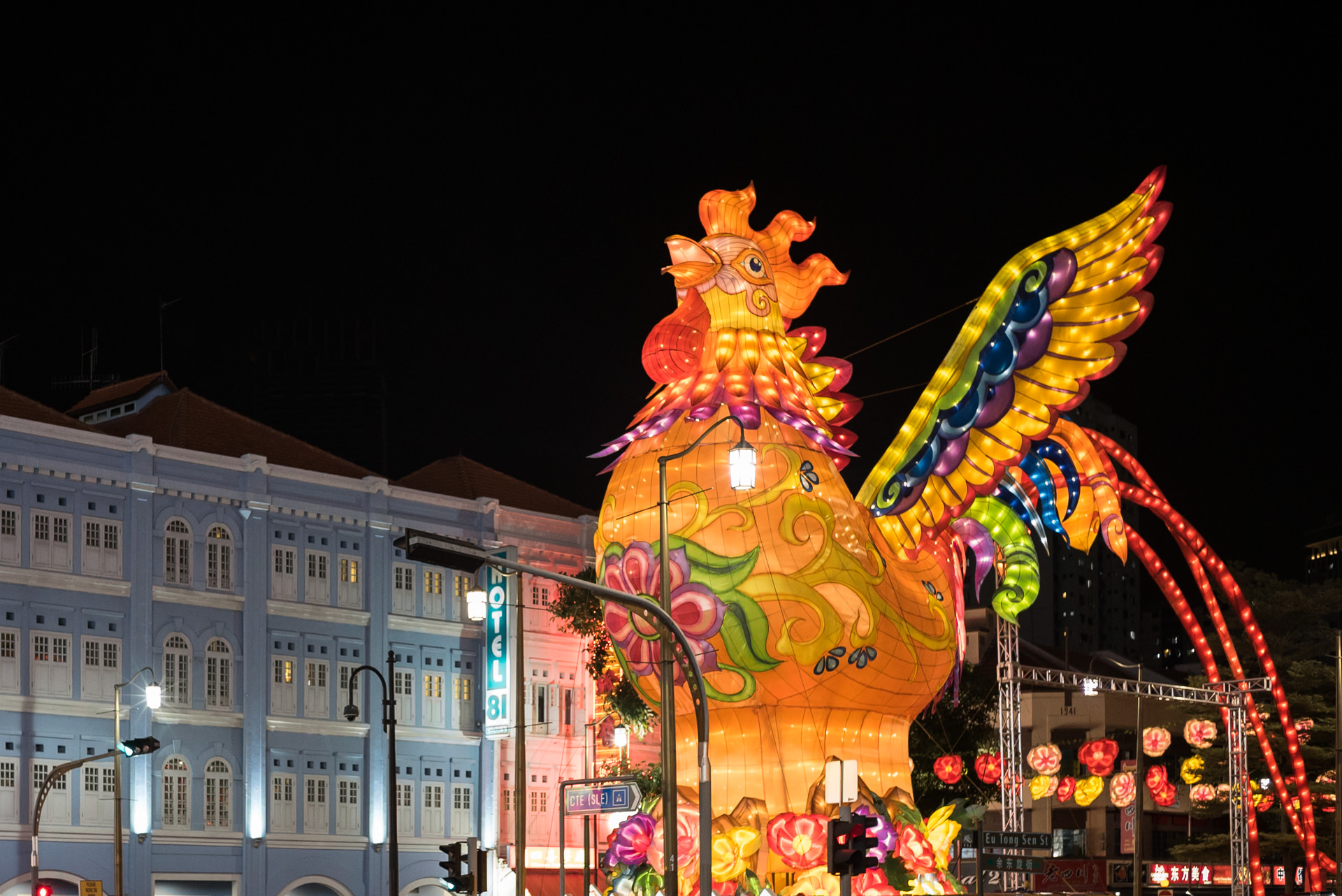 “Two! Two dollars for a box of biscuits! Ten lollipops for fifty cents!”, a peddler from the stand at the alleys intersection outshouts dozens of others around him.

“Dried squids! Smoked fish! Half price!”, booms a loud voice from the other end of the street.

Tight groups of potential buyers, dressed in various shades of red, surround each stand. Someone takes bags of sweets. Someone is trying to cram smoked goodies in bags, already bursting at the seams. On the ground floor, at the knee-level of occupied with bargaining adults, kids playfully run around. Each dressed in a lovely traditional costume. Their laughter joins a trading cacophony. Over the heads, sways a red roof of Chinese paper lanterns.

The vendors are on fire. They need to sell all the goods before midnight. The New Year cannot find any remains of the old one. It would be a terrible omen. Midnight is getting closer. Just a few more minutes and the crowds of customers will disappear. In a red wave, they will move to the main street of the district to watch the fireworks display brightening the night sky.

On the eve of the Chinese New Year, the main street of Chinatown is transformed into a giant stage. You can see here colourful parades of fire eaters, groups presenting a Lion Dance and dressed in traditional Chinese outfits celebrities. In the central part of the street stands a giant statue representing the patron of the year – twisting serpent-body of a dragon, a horse with windblown mane or a proud rooster. Next to the statue, there is a stage where performances and concerts take place.

Red is the dominant colour of celebrations. It owes its unique rank to a legend, according to which during the New Year beast named Nian, was attacking villages devouring crops, cattle, and even children. Every year, residents were leaving food at the home thresholds, believing that this way mollified beast will leave them in peace. Once, it was noticed that the monster got scared of a child dressed in a red outfit. From then on, villagers embellished houses with red lanterns and wore red clothes in an attempt to scare away Nian. Using firecrackers was another way to deter Nian. Such tradition survived to this day, and a fantastic fireworks display culminates the beast deterrence. Midnight fireworks also mark the end of CNY Eve celebrations and entrance to the New Year.

The New Year is a new beginning. Businessmen and traders are very strict about this principle. Unconditionally all debts must be paid off before the stroke of midnight. According to the tradition, rice is sent together with the repayment as a token of gratitude for the loan. Grains symbolise luck and abundance. Merchants are busy selling off the last year’s goods, and it comes as a huge benefit for buyers, as the sales are associated with significant discounts. The Chinatown street market, offering clothing, souvenirs or delicacies of traditional cuisine is usually vivacious. But its daily, even a weekend buzz, is nothing in comparison to the Chinese New Year Eve. The entire width of market alleys is tightly filled with a massive crowd of potential customers. Restaurants and eateries barely keep up with serving food and refreshments. On top of this, there is the final rush before midnight, when the ‘old’ goods must disappear from the shelves, so traders distribute everything at any rate.

Especially popular during the Chinese New Year celebration is the Bee Cheng Hiang store. Shops scattered throughout Singapore specialise in making bakkwa – thin sheets of dried and smoked pork, marinated in a sweet sauce. Meticulously and carefully packed in red bags with a golden logo, bakkwa are the perfect addition to the Reunion Dinner.

As one of the most important holidays in Singapore, the Chinese New Year is very rollickingly celebrated. Celebration in Chinatown is recommendable, but only to those who do not mind crowds. Crowds can be so massive that create human traffic jams on the narrow alleys of Chinatown street market. An alternative option for exploring Chinatown during the festive period is to go there two or three days after the celebration of the eve. The crowds (along with sales and discounts) disappear, but lovely decorations remain.

Massive sales may also be enticing to spend Chinese New Year Eve in Chinatown. Clothing and souvenirs (which usually are not expensive here anyway – from 5SGD onwards), on that day, you can get for next to nothing. It sometimes happens that just before the stroke of midnight sellers begin to give away goods for free. According to the tradition, it is bad luck if the New Year finds anything old on the shelves. The most obedient to the rule are sellers of food. They create a heaven for kids who are being given free sweets with the stroke of midnight.

Do bear in mind, that the first two days of the Chinese New Year celebrations are public holidays and almost all the stores, shopping centres, etc. are closed. Organising upfront food supplies for these days is highly recommended. Small local shops and some stalls in food courts are often closed throughout the whole period of the celebration – traditional 15 days.

Chinatown district with a Mass Rapid Transport (MRT) station at its very heart.

Traditions of the Chinese New Year - the Reunion Dinner

The Lion Dance - dancing into the Lunar New Year

Deepavali – Festival of Light in Singapore

We can barely squeeze through the narrow streets filled with festively dressed, colourful crowd of people. Always...